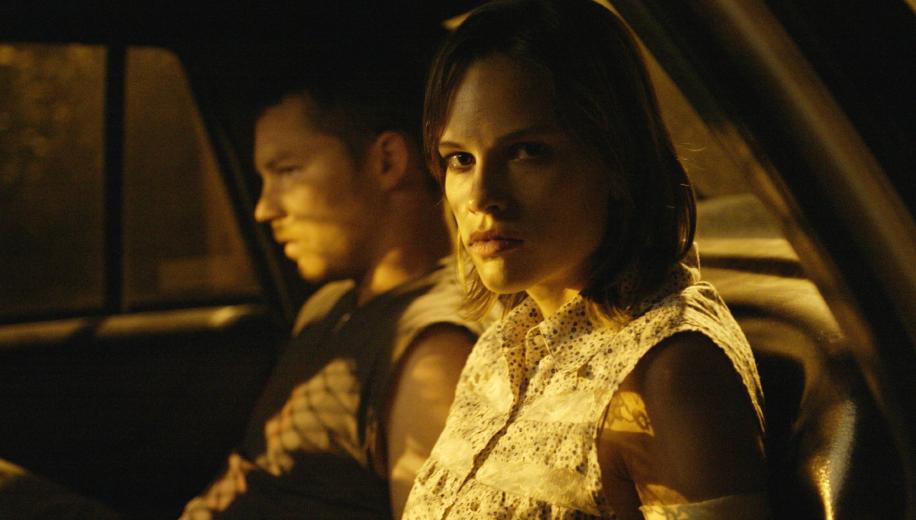 New Line has presented a theatrically correct 1.85:1 aspect anamorphically enhanced for widescreen TVs picture with an average bitrate of 7.28 Mbps. The entire film is set at night, and it shows in the print, most of it is rather grainy, the most prevalent feature of the picture. Colours are rather muted tending towards the greens and oranges, a function of the cinematography and are represented well, there is no bleed or wash. Contrast and brightness were for the most part well set, blacks did tend towards the green at times, but this was not distracting as the whole picture had that hue, but it did detract for the depth in places. Detail levels were pretty average, nothing was lost, but nothing was sharp either, with the exception of the interior of the store, here we are treated to a very nicely detailed image, but at the expense of rather harsh lighting, and that ever persistent film grain. Digitally there were no compression problems or edge enhancement and the picture had a resoundingly 'thick' feel to it, no doubt due to the high average bitrate. No shortage of sound options with a Dolby Digital 5.1 track, a Dolby Digital 2.0 surround track and a DTS 5.1 surround track, all in English. I must admit to being hugely impressed by the Dolby 2.0 track, not only did it have a full dynamic range, but was clear, precise with plenty of bass, and though there was not much in the way of effects is was still a good solid track. The Dolby 5.1 track expands on the 2.0 by introducing decent separation, the range, however, remains the same as it needed no improvement. Effects wise there is an opening up of the sound stage by adding some direction to the sound, but the rears are somewhat underused, only really coming into lay during the many music tracks that make up the score. It is during these moments when the track really comes alive being full dynamic and vibrant. The DTS track again improves on the Dolby 5.1 with wider separation, more clarity to the dialogue and being louder. There was no improvement to the range, going to show just how good it was to start with, and the effects are the same as well. Of the three tracks I went for the DTS as the best choice. And choice is the best description for this disc's tracks, because as dynamic as they were there was no real involvement and with the exception of the excellent range these were above average tracks. Greg Marcks provides a full audio commentary for the film, I say full, it is all rather bitty. Even though there was a fair amount of information given, both technical and anecdotal, it did tent towards being scene specific, but the worst thing was his dry delivery. Almost as if he wished he was somewhere else, perhaps something about his feelings for the film being shelved for two years might have livened up the proceedings, but nothing was said, then I don't know when it was recorded.

There is a nine minute 'making of' featurette entitled forty six minutes to midnight. It is full of the normal praise being given from the cast and crew padded with film scenes and precious little behind the scenes filming. Far too short to be engaging and nothing in here that a thousand other promotional 'making ofs' don't already contain.

There are four deleted scenes that can be played separately, together with or without the directors commentary. Very little here, the most substantial scene was with Frank as he ties to explain why he is breaking into his car all the while trying to hide the contents of the boot. Explanations of there removal are mainly due to pacing.

There are two very short storyboard to film comparisons for two scenes, nothing new here.

A unique extra here, the character jump option allows the viewer to control the events of the film; whenever two characters interact a 'jump' icon appears in the right hand corner of the screen, press enter to follow the other persons path. Essentially a different way to view the film, further altering the time line to suit yourself, an interesting idea, not sure if it would make me watch it again though.Next up there are two trailers, on for this film, the other for Havoc.

Finally there is some DVD-ROM content and web links, but I wasn't going to install the viewer needed to see the content, sorry. Greg Marcks' debut film deserved to be treated better than it has, despite its flaws. It is a simple story told well and unusually with a decent cast; no doubt it will find its audience in the DVD market, even if I'm not really one of them. As a DVD package, an average picture is saved by above average sound and decent extras.