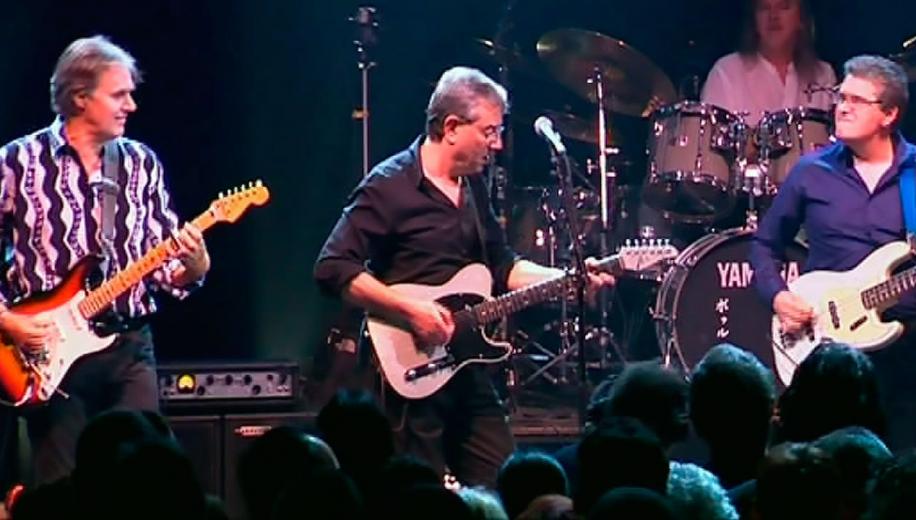 The stage is small and tight and the presentation is a little claustrophobic on this anamorphically enhanced MPEG-2 1.78:1 offering. As for most concert footage there's a myriad of lights all of different colours and intensities. These of course affect what's on your screen so expect those skin tones to be bathed in deep blues or blood reds.

The transfer on the whole is excellent with no noise, blocking or ragged gradients to be seen within these swathes of light. However in some of the darker scenes where just blue is used there is a distinct amount of grain and this really cannot be seen elsewhere within the feature. Edge enhancement does exist although whether this is because of the transfer or the haloing caused by those intense spots is another matter.


The image is little soft at times, and certainly a little softer than one would expect from any other standard DVD release; being party to the newer HD formats it does indeed seem lacking at times. Not a criticism of this DVD per-se but a very brief comparison between standard and high definition. The presentation was more than acceptable for a concert footage on standard definition and more than enjoyable to watch. There's two audio tracks on offer, a purist front stereo track and a slightly more immersive 5.1 offering. I chose the 5.1 because for concert footage I do enjoy the feeling of the crowd to my side or rear and this disc is no different. Certainly it's perhaps a little less immersive than some other concert footage I have watched, Stop Making Sense and A Night to Remember but it does add something to the mix itself.

Of course though it's the music itself which any concert must be judged upon and Clever Clogs delivers when it's needed. Guitar work comes across particularly well as does the percussion from Mike Wilson. The band's voices and especially the harmonics produced are wonderfully realised and the vocals are not lost due to excessive bass, drumming, or keyboard work. Although this would sound far superior in a lossless format obviously but this 5.1 is adequate for SD; again we're now being showered in high definition audio codecs and being spoilt for choice.


The stereo track is much the same apart from obviously a little ambiance to the surrounds, so if your choice is to listen to this track then you really won't be missing out. Although decent the tonal range could have been a little wider, sometimes the very high pitches seem to lose their vibrancy and the low tones of Gouldman's bass or Burgess' drum do seem as though they're not quite hitting the mark. Even though there's not that many extras on this disc what we do have is lean and mean. Every second really is a joy to listen to to learn more about 10cc's history, a revitalised Kevin Godley on stage and the art of their original albums. These are excellent additions to the concert itself and still scores relatively highly because of this. I had the chance to see this very line up (admittedly without Kevin Godley) on May 4th this year in Falkirk of all places. I was ever so glad to be at the concert and now I'm ever so glad to have this disc so I can relive it to some degree. The songs are all the ones I enjoy and all the ones that everyone young or old will remember from some point.

I love the way that in most 10cc songs the tempo seems to constantly change and the band now still implement excellent use of harmonics to produce timeless songs sung in a very distinctive manner. They were staggering back in the 70s and their music lives on through the likes of Gouldman and his friends and DVDs like Clever Clogs.


This concert from Shepard's Bush Empire, London is a solid 7 all round from me. The video and audio bringing the score down from the very good 8 for the concert on its own. Fans should obviously pick this one up, everyone else... well you might want to try this one out and catch up on some long lost tunes.