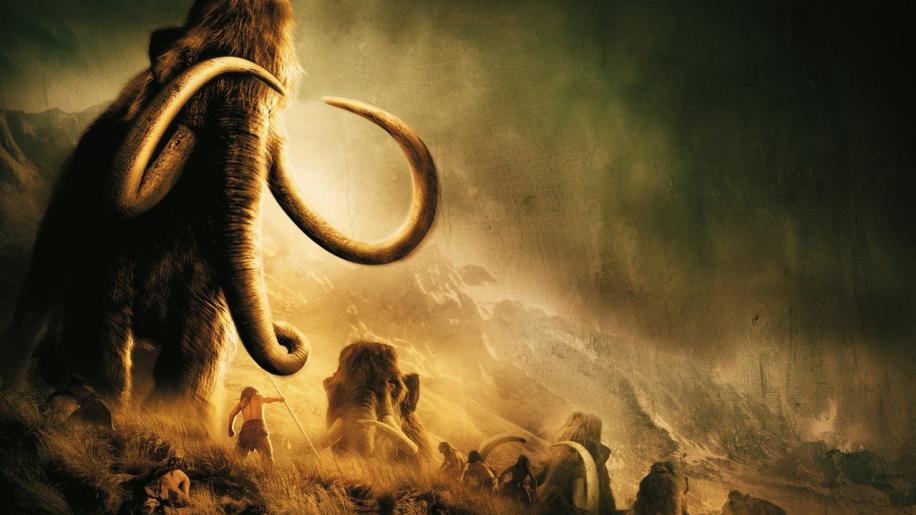 There are some films where a reputation will far precede them for all the right reasons. Similarly there are those that will have a reputation for all the very wrong reasons. The theatrical trailers for 10,000 BC threw in all the action the film possibly had to offer and as a movie it was certainly hyped to try give it some box office oomph.

However, that's not to say there was much of an air of anticipation with 10,000 BC. Being directed by Roland Emmerich (a man granted not known for his diversity of directing talents) his usual straight down the line shallow feed of popcorn entertainment was very much expected on this one.

Now, it really is not too much to expect more of the same ingredients that made films such as Independence Day, Day After Tomorrow, Stargate and Godzilla the films that they were. His style of entertainment is unremarkable as it's usually a case of grabbing some food, grabbing a drink, disengaging the brain, staring at the screen for a couple for hours and then having to re-collect your grey matter as you exit. After all, this is highly familiar tried and tested Emmerich territory, one that he's well known for and presumably for what he was actually hired by the studios to deliver once again. Surprisingly though on this evidence, 10,000 BC may have proven to be a step too far.

The film is set 12,000 years ago and in order to get you quickly up to speed, the movie begins with a narration from Omar Sharif. Although the delivery of the narrative carries with it some weight, it is in fact severely lacking in much substance. There are some beautiful landscape shots to accompany everything but unfortunately there is nothing Omar Sharif can say or do to make things sound remotely or vaguely interesting. He's blessed with some truly magical vocal tones but try as he might to conjure up a decent level of interest (he certainly tries hard!) you will glean very quickly that the film is not based on anything remotely credible or factual. In fact everything he says all hangs together as a rather ill fitting, poorly concocted, far fetched storyline.

The Yagahl are a pre-historic tribe whose existence and survival solely revolves around the hunting of large woolly mammoths. They are guided by a rather batty spiritual witch doctor known as the Old Wise Mother of the tribe (Mona Hammond). At the start of each season one of the hunters of the tribe is awarded the White Spear (prized possession of the Yagahl) to head the hunt to kill a mammoth. Such is the manner of succession that the hunter who actually makes the kill is then proclaimed as the rightful leader of the Yagahl.

Enter a young unfortunate chap by the name of D'Leh played by Steven Strait. He's someone who's consistently been ridiculed by the people of the Yagahl as being a coward. Apparently his father had done something dishonourable many years previously that had resulted in extradition from the tribe. D'Leh, who is now of age, forms part of the new seasons hunting recruits and although not seriously considered as a capable hunter, he somehow and quite inadvertently manages to kill a mammoth in the hunt. It's all pretty chaotic stuff but the truth of the matter is even he does not know how he managed to kill the beast. More by accident than by design you see. As a matter of side note the herd of mammoths and the frenetic stampedes in the early scenes are in actual fact quite visually impressive. Anyhow since D'Leh is the 'son of a coward' all of this doesn't go down well with the Yagahl.

It doesn't take long for the rather choppy nature of the story to then come into effect. The movie lurches into his love interest being the beau of the tribe Evolet (Camilla Belle). No sooner are we introduced to her, that the Yagahl are then being ransacked by the fearsome four-legged demons. Many of the tribe are taken as captives and yes, you've probably guessed it, Evolet was one of those. What of these four-legged demons you may ask? Well they're horses ridden by some rather dodgy looking warlords of sorts. In actual fact they look like left over supporting cast from Stargate that Emmerich probably took pity on and promised another job to.

If you haven't got the gist of the story and where this is all headed I must admit I am now at great pain in continuing to have to explain. Why? Because it's simply not good, it's simply not good at all. Think of it as being a complete and blatant rip-off of Apocalypto but nowhere near as good. Actually a better description maybe as A-poor-calypto instead.

Anyhow moving on, the batty old witch doctor apparently has many varied powers and she can see the past present and future. Her visions, facilitated through the deceased elders of the village, dictate that D'Leh accompanied by Tic Tic (Cliff Curtis) must now set off as warriors to further prove themselves and to try help those taken as captives. From this point forth 10,000 BC seemingly and willingly transpires into what is then surely best described as a complete joke of a movie.

The pair of them travel across deserts, mountains and foreign land in search of their captive fellow tribesman. In a vain attempt to keep the movie interesting all sorts of obstacles and strange encounters are presented along the way. None more so than where D'Leh whilst hunting for food in the middle of night falls into an animal trap, a hole that has been dug deeply into the ground. He's not the only one who falls foul of the trap and is accompanied by a Sabre Tooth Tiger that is also trapped down there. Well, in his compassion for the animal D'Leh rather than kill the beast helps to set it free. In doing so both the Tiger and D'Leh make way their escape out of the hole.

The storyline has an incredibly annoying circumstantial flow to it in that everything that occurs also happens to be of significant and meaningful consequence. Take the encounter with the Sabre Tooth Tiger for example, better known as the Spear Tooth. D'Leh and Tic Tic come across the Naku tribe soon after and are just about to be overpowered and killed by them. The Spear Tooth suddenly roars onto the screen and frightens the Naku tribe into submission. Bizarrely you are then led to believe that the Naku tribe are aware of a certain prophecy of a 'chosen one' that can speak to the Spear Tooth Tiger. That so-called chosen one is meant to lead them on to defeat the 'Gods' that terrorise their lands. If that hasn't got you scratching your heads you are then led to believe that D'Leh is apparently the chosen one? Within a matter of moments his transformation from zero to hero is complete. Conversely for Emmerich quite the opposite is true as from hereon in his transformation from hero to zero is equally complete.

The staggered storyline continues to stretch credibility following on to where D'Leh somehow manages to gather all the tribes of the land being the Naku, Hoda and the Tutt Tutt and lead them across a desert towards the City of the Gods. Now the 'Gods' are a rather strange looking race of people consisting mainly of an order of High Priests and a supreme one that is known amongst them as their God. D'Leh discovers that the thousands of captives are being used as slave labour in order to build a city of Pyramids for them.

The finale is as disjointed as all that precedes it. It's all pretty formulaic stuff, it's incredibly unconvincing and it's a ready platform for Emmerich to put his final seal of complete and utter abject disaster to the movie. So much nonsense is thrown into the last fifteen minutes of the movie that it seriously left me in a vomit of complete disbelief and laughter.

Simply put, what we have got here in 10,000 BC is a rather unfortunate and bizarre prehistoric hash of a movie. One that is not only lacking in the popcorn entertainment department but one that is sadly overflowing in unbelievable fiction.

It is quite clear from this effort that Roland Emmerich is a man who has completely run dry of imaginative talent and has been left without any sensible semblance of appropriate delivery. Mankind has progressed somewhat in 12,000 years whereas he has clearly demonstrated that he has regressed. Somebody in Hollywood land needs to do us all a favour and show this guy the door. Only watch this movie if you must.