Eurocom shakes up little, and leaves nobody stirred. 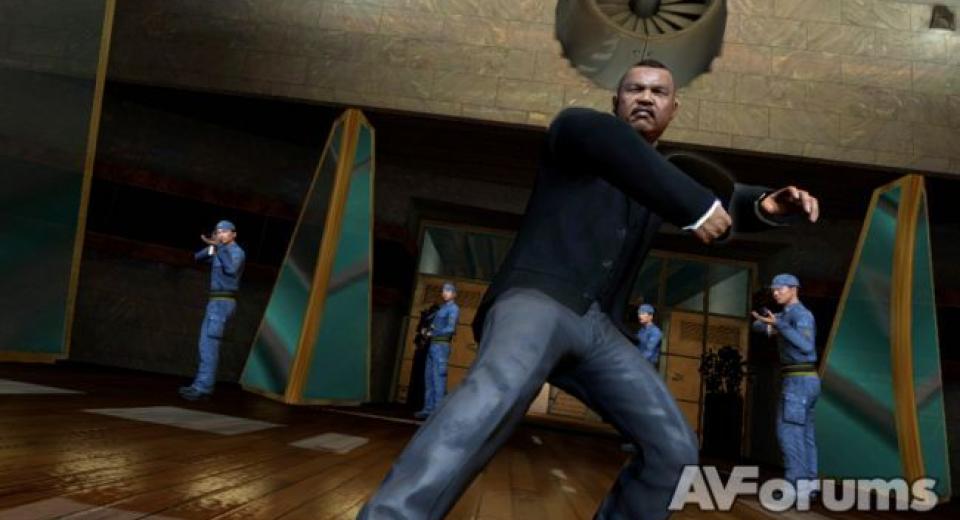 Whatever your persuasion on Roger Moore’s eyebrows, Timothy Dalton’s violent machismo or Pierce Brosnan’s ridiculous gadgets, it’s nigh-on impossible to get away from bandwagon Bond in 2012. The 50 year anniversary has combined with the magnificence of Skyfall to create a film industry marketing machine with suitable tenacity, but unfortunately it’s a shame to see this videogame tie-in given such short shrift. 007 Legends (developed by Eurocom and published by Activision) is a rushed and monotonous shooter that does its best to string together a series of playable set pieces from each of the MI6 agent's eras, but ends up setting out its stall as more of a Call of Duty mod than a cohesive Bond spectacular.
The premise (skip to the next paragraph if you’ve not seen the latest film) is that of Bond’s life flashing before his eyes as he falls to his ‘death’ at the denouement of Skyfall’s breathless opening chase sequence. Memories of past missions pop into conscious recollection as he reaches the murky depths of the river, allowing the player to take control of Daniel Craig’s persona as he shoots, drives, investigates and punches his way through sequences ripped straight from Goldfinger, OHMSS, Licence to Kill, Die Another Day and Moonraker. A few set pieces from Skyfall will round out the package and complete the story, but they don’t unlock until next week, effectively shutting them off to the majority of players who will be hard-pushed to persuade back. The idea of revising those films in an action setting certainly isn’t bad (although debate will no doubt rage about which alternative movies should have been included) and the thought of applying modern-day gadgets in an old-school setting is one rife with opportunity, but Eurocom appears to have been either pushed for time or inspiration, as each of their film-themed levels contains essentially the same component parts with a different visual backdrop.
Tearing into those ingredients then, it’s clear that the core of 007 Legends is ripped straight from the beating heart of Activision’s primary shooter franchise. The Call of Duty engine appears to be powering everything, with Bond gunning his foes down to the tune of weapon upgrades, incredibly muddy texture detail and a low rendering resolution (on console at least). That infamous ‘Follow’ message pops up above key NPC characters with the frequency that you’d expect, enemies are locked into infinite respawn patterns at certain choke points, the left trigger on your controller snaps to a target and the right guns it down. Stop me if you’ve heard this before. Also, stop me if you think that a military shooter is a bit of a weird platform on which to build a Bond game, because you’d be entirely correct. The fact of the matter is that playing 007 Legends as a shooter rarely makes you feel like Bond, but instead more like Captain Price or an unnamed SAS soldier making his way through bizarre 60’s, 80's and 90's themed battlefield in some futuristic holodeck simulation gone horribly wrong. I’d estimate that maybe 70% of the action sequences are comprised of formulaic shooter levels that you’ll wade through out of boredom or desperate hope that better is to come, but (outside of a rather inspired zero-G take on Moonraker’s space battle) that promised upswing never arrives.
In an effort to at least provide a little bit of authentic Bond styling to the action, the other 30% of the game is comprised of stealth and investigation sequences which make heavy use of Bond’s smartphone, camera and dart-pen. In essence that means tapping a directional button to go into a ‘vision mode’, scanning for fingerprints, solving basic puzzles and tracing electrical wires back to their source to open doors or other such mundanity. In fairness to those sections, although they’re often so basic as to be completely unchallenging, they do at least provide moments of character interaction that remind you of the source inspiration. As such, they represent the best that 007 Legends has to offer, as it’s probably best to forget about the horrible driving and QTE combat sequences that round out the rest of the singleplayer offering. Of course it wouldn’t be a Bond game (or a CoD game) without another attempt at recapturing the magic of Rare’s Goldeneye multiplayer, and Legends is no slouch in that regard. There are a whole slew of game modes to keep you occupied here, with 12-player online, 4-player splitscreen and a wide variety of unlocks and xp-based perks as virtual carrots. Level design is at least competent if a little uninspired, and there are masses of objective-based and deathmatch-styled game modes to sink your teeth into on the long haul. It’s basic fun without ever rising above average standards, although it has to be noted that it was often difficult to get into a lag-free game during our testing period - and a lack of visual damage feedback rendered the action a little imprecise.

If multiplayer is all that you’re after, 007 Legends is a middling offering that may well fill a local splitscreen-shaped hole in your N64-loving heart. For everybody that was interested in the era-spanning singleplayer take on classic Bond films however, it’s hard not to be supremely disappointed in the final product that Eurocom have produced.

The premise is sound and may well have worked if they lent harder into the ridiculous nature their scenarios with a little more variety, but outside of Moonraker’s floating battles, that never comes close to being a wish fulfilled. The Call of Duty formula is unshaken, and audience interest is seldom stirred. With the Bond celebration of 2012 still in full swing, that's a huge shame.