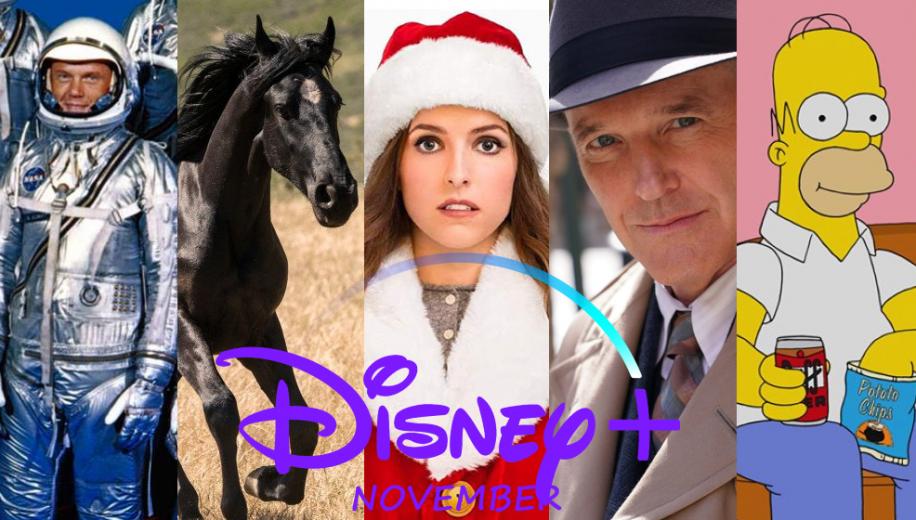 The UK service is still playing catch up to its US counterpart but this month sees the appearance of some long awaited content alongside the more usual synchronous launches, bringing Disney+ UK closer to parity with its transatlantic cousin.

It’s now virtually a year since Disney+ was launched in the US and 2020’s production delays have seen the service resort to a slow but steady stream of behind the scenes docs, library family favourites, a flagship series and some cinema treats brought to the screen early.

One question being asked is whether the discovery of some date information spotted in the source code of the Disney+ WandaVision landing page is a clue that the first of the Marvel TV shows may be heading for a debut of 27th Nov. Of course, it could merely be a placeholder and until there’s official confirmation, it’s mere speculation. But if it’s not November, it’s likely to be December to fit in with Disney's promise of ‘late 2020’.

Onto more solid ground and November brings UK viewers up to date with season 31 of The Simpsons on 6th November and the final season of Marvel’s Agents of S.H.I.E.L.D arrives on 13th November mere weeks after season 6 arrived in September. There’s also the Anna Kendrick starring Noelle which was available for US viewers at launch last year and now comes ready for Yuletide in the UK.

Let’s take a closer look, remembering as always that we’ve tried to keep this rundown as UK specific as possible but please note streaming dates can change, content can sometimes be territory specific and shows can even get changed by Disney itself. And remember to keep checking back for updates as Disney+ continues to add to its lineup.

Among the 22 episodes are Go Big or Go Homer, The Fat Blue Line, Better off Ned and The Hateful Eight-Year-Olds. It was during this season that actor Hank Azaria who voiced Apu Nahasapeemapetilon decided to step down from playing the popular character since his vocal portrayal had started to come under scrutiny as being inappropriate.

Couch Gags from season 31 are presented below.

Docuseries that will focus on the day-to-day operations of the animation powerhouse looking at personal and cinematic stories that provide an insight into the people, artistry and culture of Pixar Animation Studios. Early previews seem to indicate a look at the making of the short, Out, as well as the upcoming feature film, Soul.

To summarize would no doubt bring up some spoilers for earlier seasons but fans who’ve stuck with the whole fun ride from the start can jump straight from season 6, which landed on the UK service in September, to the final run here which will no doubt throw in everything it can muster as it brings the S.H.I.E.L.D saga to a final season conclusion. As the show heads towards its climax, Marvel Television head (at the time) Joseph Loeb promised episodes that would "go out with some scope and style.”

The LEGO Star Wars Holiday Special reunites Rey, Finn, Poe, Chewie, Rose and the droids and sees Rey leave her friends to prepare for Life Day as she sets off with BB8 on an adventure to gain a deeper knowledge of the Force. At a mysterious temple, she is hurled into a cross-timeline adventure where she meets a much younger (so presumably a lot less grumpy) Luke Skywalker  along with Darth Vader, Yoda, Obi-Wan and other iconic heroes and villains from all nine Skywalker saga films. But will she make it back in time for the Life Day feast and learn the true meaning of holiday spirit?

LEGO has been creating Star Wars shorts since 2005 when it debuted LEGO Star Wars: Revenge of the Brick on Cartoon Network. After that, it branched out into television specials and its latest is both a sequel to, and satirisation of, the infamous 1978 Star Wars Holiday Special which first introduced the concept of Life Day as a Star Wars universe holiday celebration.

There’s plenty of fun and excitement for Mickey Mouse and his best friends - Minnie, Donald, Daisy, Goofy and Pluto - as they embark on their latest adventures, navigating the pitfalls and curveballs of a wild and crazy world where the magic of Disney makes the impossible possible.

The series of animated shorts is a continuation of the Emmy Award-winning Mickey Mouse TV series and uses the same style with many of the same cast and crew.

A reference to Earth-616, which is the main Marvel comics’ universe/timeline/dimension doohickey, this 8-part anthology documentary series explores the cultural and societal impact of the Marvel Universe’s use of out-of-this-world stories and characters to reflect the real world we live in. Looking at the intersections of storytelling, pop culture and fandom, the series uses a different filmmaker for each episode to explore a range of topics. Interviewing the writers, creators, and contributors behind the iconic characters and story arcs and two of the episodes feature Community’s Gillian Jacobs, who shines a light on trailblazing female superheroes, while Veep’s Paul Scheer gets underneath the skin of the often forgotten and more bizarre characters found in the comics.

National Geographic documentary which follows the story of the first American astronauts into space and the surrounding incredible true life events that have recently been dramatised in The Right Stuff series, currently streaming.

Pulled from hundreds of hours of archived film and radio broadcasts, interviews, home movies and other rare and never-before-seen material, the two-hour documentary is a gripping account of NASA’s Project Mercury program, which revolutionised America’s role in human space exploration and inspired future generations of space enthusiasts.

The Real Right Stuff eschews modern narration and talking heads but uses Emmy and Peabody Award-winning filmmaker Tom Jennings’ signature style to give viewers an unparalleled feel for the early days of the Space Race.

Update 12-Nov-2020:
﻿Disney+ has confirmed that the series will be coming to the service on 15th Jan 2021. There's no word whether all six 1-hour episodes will drop at once or air weekly as they are doing for The Mandalorian.

Despite the most recent promise by Disney that the series would hit screens 'by the end of 2020', the scheduling language had recently changed to 'this winter' and with cast members still being announced only a few weeks ago - Orange is the New Black's Jolene Purdy joined recently - and with the possibility of a Mandalorian style behind-the-scenes documentary series also being prepared, it's perhaps not surprising that the date has been edged out of 2020.

Will there be further changes? It can't be ruled out, after all, messing with reality is Wanda's strong suit.

Virtually nothing is known about the plot for WandaVision other than it appears to be a blend of classic television and the Marvel Cinematic Universe in which Wanda Maximoff and Vision - two super-powered beings living idealized suburban lives - begin to suspect that everything is not as it seems.

Added to this rundown as a ‘just in case’, WandaVision will be the beginning of Marvel’s Phase Four. It will also be the first of the Marvel TV series that were announced back in 2018 to make it to Disney+. Originally planned for early 2021, and due to be screened after The Falcon and the Winter Soldier debuted and Black Widow appeared in theatres, Disney has been juggling with the Covid-19 interrupted production schedules and has now promised WandaVision by the end of 2020.

Although largely anticipated to be streamed in December, clues reported by DisneyPlusInformer.com in the landing page code for the programme mentioned 27th Nov, so there’s the very slim possibility that DisneyPlus could be planning a surprise. Regardless, there’s no official date but the breadcrumbs found so far are enough of an excuse to include the trailer here.

Having settled down after the events of the Meltdown, Manny and Ellie are expecting a baby and getting everything ready for the new arrival. It gets Sid thinking about a family of his own but when his plan to adopt three dinosaur eggs gets him abducted by their real mother to an underground lost world, his friends attempt to rescue him.

The third instalment of Blue Sky Studios’ Ice Age franchise sees an injection of new characters including Simon Pegg’s dinosaur hunting weasel, Buck. It was also the first 20th Century Fox film to be released in 3D and went on to gross just under $900 million at the global box office.

Transplanting the original Victorian England setting of Anna Sewell’s novel to modern day America aids this reimaged version of a classic tale which sees the titular Black Beauty, a wild mustang born free but rounded up and taken away from her family, meet a spirited teenage girl, Jo Green, herself grieving a familial loss. The pair forge an unbreakable bond that carries Beauty through the different chapters, challenges and adventures of her life.

Kate Winslet is on voicing duties as Beauty.

Lucy and Edmund Pevensie return to Narnia with their annoying cousin Eustace where they meet up with Prince Caspian for a trip across the sea aboard the royal ship The Dawn Treader. Along the way they encounter dragons, dwarves, merfolk, and a band of lost warriors before reaching the edge of the world.

In a twist of fate, the production was originally in the hands of Disney before 20th Century Fox took over after budget concerns - perhaps Disney knew they’d end up with the film eventually anyway!

Plans to produce The Magician’s Nephew as the next film in the series were put on hold in 2011 and the future of the popular franchise has remained uncertain ever since.

Noelle Kringle is Santa's daughter and is always full of Christmas spirit and holiday cheer, however, she wishes she could play more of a pivotal role in the family business. She gets her chance when her father retires and her brother, Nick, who is supposed to inherit the Santa role, gets cold feet and disappears.

One of the first Disney original movies to feature on the streaming service when it was launched in the US at the end of 2019, UK viewers have had to wait a whole year for the seasons to realign for an appropriate release slot for Noelle - after all, a Christmas film in the summer? It just wouldn’t be right!

So, that’s your mix of films and TV shows coming to Disney+ UK in November. We’ll keep the article updated when more information is released, so make sure you pop back to keep up to date.

Let us know what you think of Disney Plus’s latest line up in the discussion thread and drop in some reviews of the Disney+ content you’ve been watching recently too.