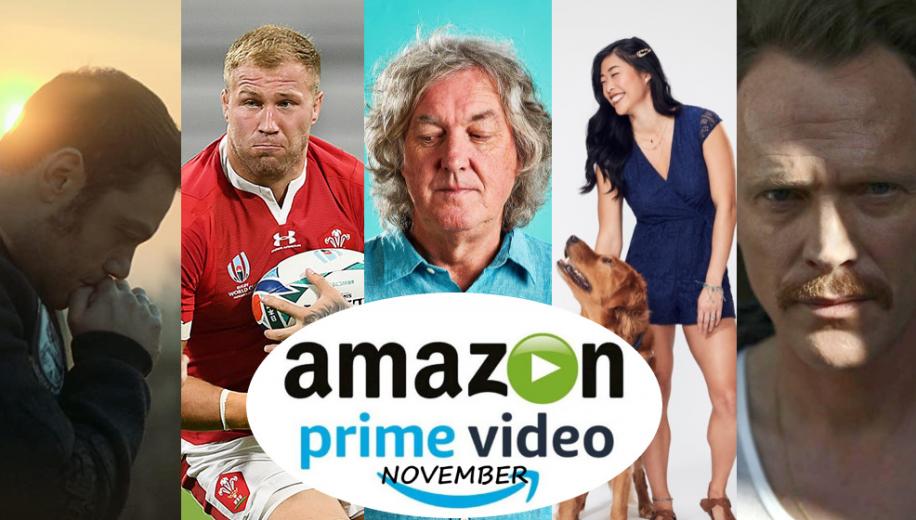 Amazon Prime Video has proved it can keep a secret with the surprise release of Borat Subsequent Moviefilm only recently. And if it’s attempting something similar for its November lineup it’s doing a damn good job of keeping a lid on that too!

It seems that Prime Video’s modus operandi means it is somewhat less forthcoming about its upcoming UK content than Netflix - hell, even Disney+ splash their releases about a bit more profligately - with the release listing for the upcoming month tightlipped until the last minute.

However, there are a number of new Amazon Original shows and movies that have been announced generally and these tend to have synchronous releases across the Amazon Prime Video territories.

Therefore, included for streaming in November is the road trip movie Uncle Frank, which stars Paul Bettany, sport in the form of the Autumn Nations Cup, and reality/competition show The Pack which sees proud pooch owners and their hounds taking on various challenges. And James May swaps engine oil for olive oil and gets his hands dirty in the kitchen with Oh Cook!

Let’s grab a closer look, bearing in mind that although we’ve tried to be as UK specific as possible (not easy - see above!), streaming dates can change, content can sometimes be territory specific and shows can even get pulled or announced at the very last minute by Amazon itself.

Sergio Jadue, a lowly director of a small-town soccer club in Chile, unexpectedly finds himself the head of the Chilean soccer association. Drunk with power, he will become the FBI's key to undoing the largest corruption scheme in the world of football.

Actually, we're starting off with a bit of a curveball here and eagle-eyed readers will spot that El Presidente appeared in the June rundown for Amazon Prime Video - so what’s it doing here? Well, it seems like a new English dubbed version will be streamed in November and, if the original Spanish language version remains available, that means viewers have the option of subtitles or overdubs... and choice is, of course, good!

Docuseries about contemporary Italian singer Tiziano Ferro. Known as the modern face of Italian pop music. Set in both Italy and the U.S., the series is a behind-the-scenes look at 20 years in the life of this popular and talented artist who’s had his share of ups and downs dealing with success, eating disorders and depression. Narrated by the people closest to him and those with whom he works, the documentary reveals the person behind the spotlight, including never-before-seen footage.

Ferro is currently one of the best-selling artists in Italy and, as well as being popular in many other territories, he frequently writes songs for other artists.

16-year-old Wayne has a code and can't help himself from righting the world's wrongs - though he’s more Dirty Harry than Mother Teresa. Now, he and his girlfriend Del are in Bonnie-and-Clyde mode on a two stroke road trip from Boston to Florida to get back the 79' Trans-Am that was stolen from his father before he died and which is rightfully his.

From the producing /writing team  Rhett Reese, Paul Wernick  (Deadpool, Zombieland), Wayne features a mix of comedy, drama and sometimes shocking violence. It was first shown on YouTube but cancelled after the first season despite some strong critical notices and more than 10 million views over 5 days for the series premiere.

Running for a total of 11 seasons, Modern Family is a US mockumentary style sitcom about the intertwined lives of three related families with different makeups - namely nuclear, blended and same-sex.

Although viewing figures declined as the seasons progressed, the show remained popular to the last, becoming the sixth highest-rated scripted show in America and picking up 22 Emmys out of 75 nominations.

You’re all thinking it, so we’ll just come out and say it… what a dos!

Former corporate defense attorney Robert Bilott finds himself on the other side of the courtroom when he starts investigating a farmer’s claims that his land and animals have been poisoned by the waste from a nearby chemical plant. His subsequent inquiry uncovers a dark secret hidden by one of the world’s largest corporations but his attempt to bring it to justice comes with a risk to his family and career.

Dark Waters is based on Nathaniel Rich’s  2016  New York  Times Magazine article “"The Lawyer Who Became DuPont's Worst Nightmare." DuPont, the chemical firm at the centre of the pollution and cover up case were already in the process of mitigating the damage it had caused by settling several public health lawsuits and splitting off the offending chemical portfolios when the film came out in November 2019.

Settling on a different take for his cooking programme, James May presents a culinary show for those who can’t cook but like to eat. But it’s not just about throwing ingredients at the wall and seeing what sticks, May is guided through the dishes and recipes by professional home economist Nikki Morgan to help show that if he can do it, anyone can.

The show’s title is a playful twist on May’s Top Gear / Grand Tour exclamation of frustration.

And yes… unsurprisingly, there is a cook book to accompany the series in time for Christmas.

With coverage fronted by Gabby Logan alongside Bryan Habana and other top class rugby names, the Autumn Nations Cup competition will be the first full rugby tournament to take place in the Northern Hemisphere after an enforced seven-month break in international rugby resulting from restrictions due to the COVID-19 pandemic.

A former White House Communications Director starts her own crisis management firm only to realize her clients are not the only ones with secrets.

Created by Shonda Rhimes and loosely based on former President George H.W. Bush administration’s press aide Judy Smith. Smith formed her own crisis management company which has gone on to advise such notable clients as Monica Lewinsky, actor Wesley Snipes and Sony Pictures Entertainment after their 2014 cyber attack.

The coming-of-age story of Mason which follows him from early childhood to his arrival at college, incorporating along the way the familiar but unpredictable whirl of family moves, family controversies, faltering marriages, re-marriages, new schools, first loves, lost loves, good times, scary times and a constantly unfolding mix of heartbreak and wonder.

Famously filmed with the same group of actors over a 12 years period, this remarkable project saw director Richard Linklater view the previous year’s footage to write the next year's portion of the film which allowed him to incorporate changes he saw in each actor into the script. Each of the major actors participated in the writing process and added their life experiences into their characters' stories.

An awards darling, the mammoth 12 year feat is likely to be eclipsed by Linklater’s latest endeavour Merrily We Roll Along, which will attempt to follow characters aging over 20 years.

With their partners away serving in Afghanistan, a group of women on the home front come together to form the very first military wives choir, helping each other through some of life’s most difficult moments and also becoming a media sensation and global movement in the process.

The Pack sees twelve pairs of dogs and their human companions compete in an epic adventure across multiple continents, packed with exciting challenges designed to celebrate the bond between pet and owner. The stakes are high with a huge three quarters of a million dollar prize being split between the winners and their chosen charity.

Who’s a good dog? You’re a good dog! Now win me some money! … was a title that wasn’t considered.

In 1973, teenaged Beth Bledsoe leaves her rural Southern hometown to study at New York University where her beloved Uncle Frank is a revered literature professor. She soon discovers that Frank is gay, and living with his longtime partner Walid “Wally” Nadeem - an arrangement that he has kept secret for years. After the sudden death of Frank's father, he reluctantly returns home for the funeral with Beth in tow, to finally face a long-buried trauma that he has spent his entire adult life running away from.

Director Alan Ball has previously worked on ensemble TV dramas Six Feet Under and True Blood and his script for the film is partially based on his own father. Uncle Frank had its world premiere at the Sundance Film Festival on January 25, 2020 after which Amazon acquired the distribution rights.

A group of twentysomethings studying magic in New York discover a real-life fantasy world that poses a great threat to humanity in this drama adapted from Lev Grossman's book series.

Jackson Maine, a seasoned musician discovers and helps a struggling young singer find fame and success. He gradually falls in love with her but as her career soars, the personal side of their relationship breaks down, even as Maine fights an ongoing battle with his own internal demons.

This fourth filmed version of Hollywood’s obsession with older male impresarios and the younger, talented women they fall for, had just about every major film and singing star associated with it over its lengthy pre-production.

In the end we got Gaga and Cooper… not bad!

A young man who survives a disaster at sea is hurtled into an epic journey of adventure and discovery. While cast away, he forms an unexpected connection with another survivor: a fearsome Bengal tiger.

Based upon the bestselling book by Yann Martel, Life of Pi used cutting edge VFX (for the time) to propel the fantastical narrative. The film was a commercial and critical hit, pulling in over $600  million and winning Oscars for the effects as well as for Ang Lee as director and Claudio Miranda for cinematography.

So, that’s the early word on films and TV shows coming to Amazon Prime Video UK in November. We’ll keep the article updated when more information is released, so make sure you pop back to keep up to date and don't forget to leave a comment about what you're planning on watching.