Soulmate - is Amazon Prime 'the one'? 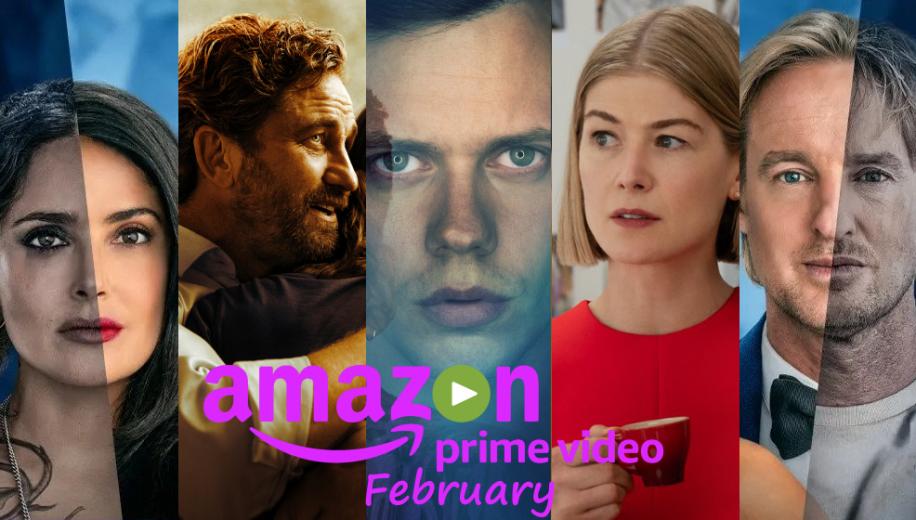 Amazon Prime Video UK remains coy about its upcoming content, preferring, it seems, to tease a small handful of originals for the month and leave the many library movies and shows which it also adds on a monthly basis to be unveiled only a few days before they hit the streaming service.

Amazon has even held back on promoting some of its own original content. Case in point is the Michael Bay produced Songbird, which looks at the world in a few years time as it continues to reel from a mutated Covid-19 virus. The movie became available on 15th Jan 2021 with little or no fanfare, giving news outlets no real opportunity to let viewers know it was coming.

Still, February does bring another global disaster movie in the form of Gerard Butler's Greenland and there's also Amazon Original film Bliss starring Owen Wilson and Salma Hayek, plus Soulmates, an anthology series about how it has become possible to find the ‘one true love’.

There’s also I Care a Lot which stars Rosamund Pike and Peter Dinklage and, most unusually, is launching on 19th Feb simultaneously on both Amazon Prime and Netflix. Which service is delivering the movie is dependent on territory, so while viewers in the US, Germany, Latin America, South Africa, the Middle East, and India get to catch this black comedy thriller on Netflix, it’s available to UK viewers on Prime Video UK. Australia, Canada, Ireland, Italy, New Zealand will also receive the film via Amazon Prime too.

Let’s have a closer look at what we do know is coming, remembering that although we’ve tried to be as UK specific as possible, streaming dates can change, content can sometimes be territory specific and shows can even get pulled or added at the very last minute by Amazon itself.

US reality show borne out of the 2010 documentary of the same name which sees Nev Shulman, one of the original filmmakers, take the premise of testing the authenticity of online dating profiles even further when he is requested by prospective online partners wanting to make sure they haven’t fallen in love with someone who really isn’t who they appear to be.

Originally scheduled for November 2020, the one and only season of this darkly comedic former YouTube show finally makes it onto Prime Video UK.

16-year-old Wayne has a code and can't help himself from righting the world's wrongs - though he’s more Dirty Harry than Mother Teresa. Now, he and his girlfriend Del are in Bonnie-and-Clyde mode on a two stroke road trip from Boston to Florida to get back the 79' Trans-Am that was stolen from his father before he died and which is rightfully his.

An unfulfilled man (Owen Wilson) and a mysterious woman (Salma Hayek) believe they are living in a simulated reality, but when their newfound ‘Bliss’ world begins to bleed into the ‘ugly’ world they must decide what’s real and where they truly belong.

This mind bending love story from writer / director Mike Cahill, who bought us Another Earth, explores elements of The Matrix inspired red pill / blue pill dilemma and asks whether ignorance really is bliss.

As fragments of an Earth bound comet alert the globe to impending disaster, John Garrity, his estranged wife Allison and their young son Nathan make a perilous journey to their only hope for sanctuary. Now Garrity must experience the best and worst in humanity as his family faces the increasing panic and lawlessness spreading around them on their desoparate flight toward the only safe haven on the planet.

Former stuntman turned writer / director Ric Roman Waugh reunites with his Angel Has Fallen leading man Gerard Butler after an earlier pairing of Chris Evans and Neill Blomkamp fell through. The focus of the unfolding apocalypse remains on the family rather than the larger scale consequences in a similar vein to Steven Spielberg’s War of the Worlds.

Greenland’s theatrical release was largely scuppered due to the coronavirus pandemic and it only made it to cinemas in a handful of countries (no world on whether the titular territory was one of them though) before being pulled from US release schedules and hitting VOD services at the end of last year to generally positive notices.

Fifteen years into the future, tech company Soul Connex has made a discovery that changes the lives of everyone on the planet - a test that unequivocally determines your one and only soulmate.

The single test leads to six stories as each episode explores the choices that have been made and the impact on a myriad of relationships with a different cast for each tale.

Deciding to take the test (or not…) are Watchmen’s Malin Akerman, Breaking Bad’s Betsy Brant and David Costabile,  Steve Oram from Sightseers,  Kingsley Ben-Adir most recently seen in Prime Video’s One Night in Miami and Pennywise himself, Bill Skarsgård.

The series muses whether love is destiny or a choice and whether the ‘one‘ is really the best person for you if that love is all consuming.

If it feels like there’s an air of Black Mirror in the premise, well that’s because co-writer  William Bridges has penned a couple of episodes of Charlie Brooker’s cautionary tales of science and technology gone bad.

Quick-witted teen Mark is content to live the same day in an endless loop but finds his world turned upside-down when he meets the mysterious Margaret, who is also stuck in the same loop. Instantly forming a bond, Mark and Margaret set out to find all the tiny things that make that one day perfect. What follows is a love story with a fantastical twist, as the two struggle to figure out how – and whether – to escape their never-ending day.

The screenplay is by Lev Grossman based upon his own short story.

A woman who makes her living by deceiving judges into appointing her as the "legal guardian" for the elderly and vulnerable lands into hot water when the latest victim she is swindling turns out to have ties to a powerful gangster.

After its world premiere at the Toronto International Film Festival on September 12, 2020, distribution rights were acquired by both Amazon and Netflix for a simultaneous release in different territories.

At a school for problem children, located next to an old monastery in an inaccessible and isolated spot between the mountains, students rebel against the teaching authorities which leads them to uncover the dark mystery that plagues the institution.

An eight part reboot of the earlier, popular series El internado, which originally aired from 2007 to 2010.

A year after the explosive events of the first season, England finds itself embroiled in a devastating civil war, with the powerful, neo-fascist Raven Union threatening to control the entire country while North London remains one of the few resistance holdouts remaining. It’s here we find Alfred Pennyworth now running The Delaney, a black-market Soho club in the West End Neutral Zone that welcomes everyone, regardless of their politics. Alfred, with his SAS colleagues, is now in search of a way out – before London, and his country, burns itself to the ground. And he’s got his eye on America.

The continuing origin story of Alfred Pennyworth, a former special-forces soldier living in an alternate version of England and how he came to work for Bruce Wayne's father.

So, that’s the early word on films and TV shows  coming to Amazon Prime Video UK in February 2021. Pop into the discussion thread and let us know what you think of the lineup so far. We’ll keep the article updated when more information is released, so make sure you come back to keep up to date.