Clarkson returns to the Amazon 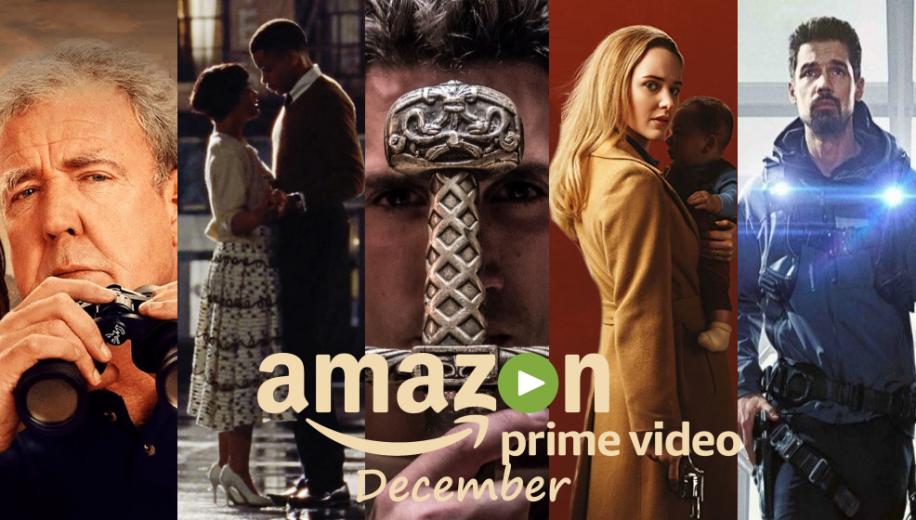 Having loaded up on Christmas calories in its November lineup, the content on offer for December seems leaner and meaner - a drama based detox, if you will.

As the service continues to be coy about what is and isn’t coming to the UK service, especially when it comes to library movies, it also looks like the UK will have to wait until January for a chance to see Riz Ahmed in The Sound of Metal. In this movie, Ahmed plays a heavy metal drummer who starts to lose his hearing and has to reassess his life, and while most other territories will get this on 4th December, UK fans of Ahmed will have to wait until 29th Jan 2021 - by which time, the chime of Christmas bells should have stopped ringing in our ears.

There are, however, a couple of other Amazon Original films that we will get, including crime drama, I’m Your Woman, and period romantic piece, Sylvie’s Love.

Sci-fi fans will be happy to see the return of cult fave The Expanse for its fifth season, while the legend of El Cid is retold in long form narrative courtesy of a Spanish language series. Meanwhile, the UK’s very own dashing warriors Clarkson, May and Hammond return for the Grand Tour: A Massive Hunt (does it really need explaining!?!). Indeed, James May is doing quite nicely, thank you very much, with two Amazon Prime series on the go now.

Let’s press our noses against the frosted window of entertainment and have a closer look, remembering that although we’ve tried to be as UK specific as possible, streaming dates can change, content can sometimes be territory specific and shows can even get pulled or announced at the very last minute by Amazon itself.

Although they share a typical father-teenaged daughter relationship  - he struggles to understand her, she won’t open up to him - David and Jules are bonded by the devastating loss they experienced two years earlier when Jules’s mum was killed in a car crash. Now as they struggle to cope, she decides to take matters into her own hands and sets out to find her dad a partner and, for herself, someone with whom she can talk. The question is, in the search for a new mum, will Jules find her old dad?

L.A. district attorney Maya Travis escapes for a quieter life after a humiliating defeat in the trial of an A-list actor charged with murder.  Her career derailed, she is lured back to the DA’s office after eight years for another chance at justice when the same actor faces a second homicide accusation.

American legal drama series that was cancelled after a single season.

From the day homeless James Bowen rescued a street cat named Bob abandoned in the hallway of his sheltered accommodation, they began a friendship which transformed both their lives. Now James looks back at the last Christmas he and Bob spent scraping a living on the streets and how Bob helped him through one of his toughest times - providing strength, friendship and inspiration.

In this 1970s set crime drama, a woman is forced to go on the run after her husband betrays his partners, sending her and her new baby on a dangerous journey.

Co-written by director Julia Hart, I’m Your Woman is a refreshing female take on crime dramas of the 1970s. A tale of love, betrayal, secrets and motherhood - and what it takes to claim your life as your own. It sees suburban housewife Jean’s seemingly easy life come off the rails as she has to rely on her missing husband’s unknown colleagues, and later their families, for support and safety. But the journey might just be one headed towards danger rather than away from it.

Rachel Broshahan moves from Amazon’s frothy The Marvelous Mrs Maisel to an altogether darker role and does her very best Evan Rachel Wood impression to boot.

A group of teen girls from different backgrounds must fight for survival after a plane crash strands them on a deserted island. The castaways both clash and bond as they learn more about each other, the secrets they keep, and the traumas they've all endured. There’s just one twist to this tense drama… these girls did not end up on this island by accident.

Part survival drama, part apocalyptic quilt-making exercise, The Wild has echoes of Lost and Netflix’s own The I-land about it.

Location filming included West Wave pool in Auckland, New Zealand which is the same venue where Jason Statham competed at the 1990 Commonwealth Games as a diver, in case you were interested.

Following on from its successful debut on Amazon Prime Video in December 2019, two more tranches of Premier League footie action are coming over the Christmas period. Two full rounds of matches will be streamed, one from the mid December set of fixtures and one filling the gap between Christmas and New Year. And with the government just announcing an easing out of lockdown on 2nd Dec and up to 4,000 fans allowed at sporting events under Tier 1 restrictions and up to 2,000 for Tier 2, it’s just possible the crowd noises you hear will be real rather than from a video game.

The first set of matches are as follows:

You’ll need to be a Prime member but if you haven’t signed up and aren’t sure you want to commit, you can take out the 30 day free trial over December and then decide whether you want to continue or bail. Of course, the advantage of Amazon’s service is that you can stream every single match if you wish to watch them all. The real trick will be avoiding hearing the score from your gobby mates.

Hundreds of years in the future, the Solar System has been colonised by humanity. The three largest powers are the United Nations of Earth and Luna, the Martian Congressional Republic on Mars, and the Outer Planets Alliance (OPA), a loose confederation of the asteroid belt and the moons of Jupiter and Saturn. Amongst the shifting political sands of this triumvirate, a disparate band of antiheroes unwittingly ends up at the centre of a conspiracy which threatens the system's fragile state of Cold War.

Season five of The Expanse picks up as multitudes of humans leave the solar system in search of new homes and vast fortunes on the earth-like worlds beyond the alien Ring, and a heavy price for centuries of exploitation of the Belt finally comes due and a reckoning is at hand.

Based on James S. A. Corey’s series of novels, The Expanse was originally shown on Syfy which cancelled the series after season three. A rampant fan campaign which included crowdfunding, social media, 100K signatures and high profile celebs such as Wil Wheaton, George R. R. Martin and Patton Oswalt getting behind it resulted in Amazon picking up the beloved series.

Update 25-Nov-2020: Amazon has confirmed season six of The Expanse has been ordered and that it will be the final one.

Season Five Trailer is below - spoilers most likely for the previous seasons.

Almost a full year after their perilous Mekong escapades in episode 1 of the fourth season, the intrepid trio handbrake turn into their next adventure in a thoroughly delayed episode 2. Armed with sports cars, Richard, James and Jeremy think they are in for a relaxing road trip as they arrive on the exotic island of Reunion and race on the world’s most expensive piece of tarmac. But their real challenge propels them to Madagascar where they must tackle the world’s toughest road, in some of the most extreme mods they have ever built - all in the pursuit of buried treasure.

The story of Rodrigo Díaz de Vivar, a Castilian nobleman and war hero in medieval Spain, known as El Cid - The Lord!

Set in the eleventh century, one of the most fascinating periods in Spanish history, where Christians, Arabs and Jews lived together in the Iberian Peninsula, facing wars and forging alliances, the series examines Rodrigio’s younger years as he becomes a faithful subject, knight and hero for the crown.

Starring Jaime Lorente (from Netflix hit Money Heist) El Cid primes itself as a story of love, intrigue, betrayal and the struggle between those with power and authority.

To this day, El Cid remains a Spanish popular folk-hero and national icon, with his life and deeds remembered in plays, films, folktales, songs and even video games.

Based on the Young Adult novel of the same name, this sequel to After (2019) picks the story up one month after Tessa and Hardin have broken up. But are they really over?

Sylvie works at her father's record store in Harlem in the late 1950s where she meets Robert, an aspiring saxophone player who takes a part time job at the store. Even though Sylvie is waiting for her fiancé to return from war, she and Robert begin a passionate affair. Their time together is short and life takes them in different directions. Years later, Sylvie, now a successful TV producer crosses paths with Robert again and finds that though their lives have changed, their feelings for each other remain the same.

Written and directed by Eugene Ashe, Sylvie’s Love combines romance and music into a sweeping story that brings together changing times, a changing culture, and the true price of love.

The second set of Premier League clashes this December.

Ragnar Lothbrok was the greatest hero of his age and Vikings tracks his path from farmer to warrior king and fearless conqueror of distant shores across the ocean. Ragnar embodies the Norse traditions of devotion to the gods and legend has it that he was a direct descendant of Odin, the god of war and warriors.

The final season mainly focuses on King Bjorn's reign over Kattegat, Ivar's adventures in Rus', and Ubbe's expedition to Iceland.

Ordered as a final season of 20 episodes in two batches of 10, the second half reaches Amazon Prime subscribers just in time for 2021 to hove into view.


So, that’s the early word on films and TV shows  coming to Amazon Prime Video UK in December. Pop into the discussion thread and let us know what do you think of the streaming services adieu to 2020. We’ll keep the article updated when more information is released, so make sure you come back to keep up to date.