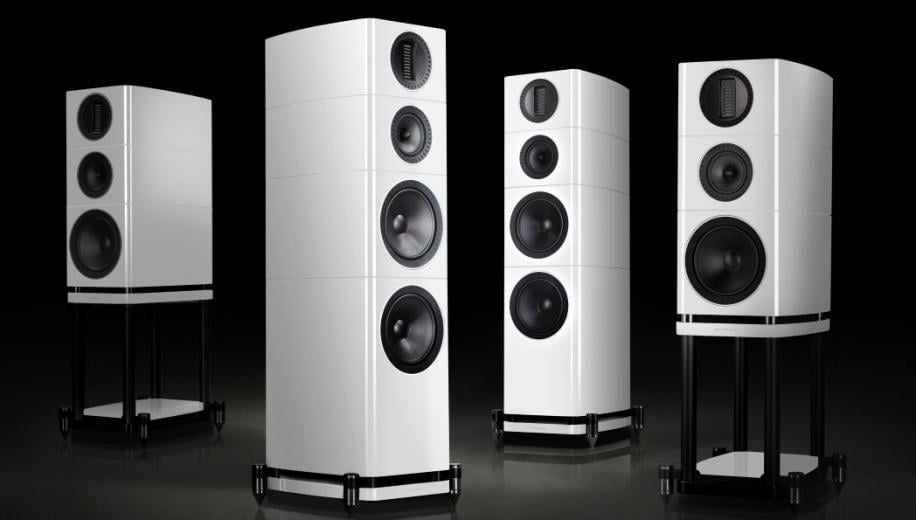 The Elysian 2 and Elysian 4 speakers from renowned UK speaker company Wharfedale are the culmination of three years of R&D and are designed to match their heavenly name.

Developed concurrently with the company’s EVO4 range of speakers, the Elysian speakers consist of just two models -  a large standmount model called Elysian 2 and a floorstanding speaker named Elysian 4. These sit just above the EVO4 range which was launched at the end of last year.

Due to the unified nature of the EVO4 and Elysian projects, both sets of speakers share many design elements including the core speakers which are three-way designs that sport an unusual and sophisticated driver array including an Air Motion Transformer (AMT) high-frequency unit.

However, in the case of the Elysian loudspeakers, each component part was engineered to the very highest standard without cost constraint while the EVO4 versions underwent some re-engineering to create a more affordable iteration of the component.

The Elysian AMT (Air Motion Transformer) has been developed as an alternative to the long standing dome tweeter models which have dominated Hi-Fi for decades. However, dome tweeters are not necessarily the ideal way of reproducing the exact harmonics of the musical waveform due to inherent limitations of size and material used which often counteract efficiency and accuracy.

Instead, the AMT uses a large, pleated, lightweight diaphragm which is driven across its surface by rows of strategically placed metallic strips immersed in a strong magnetic field. The pleats in the diaphragm contract and expand under the influence of the musical drive, efficiently squeezing the air between them to form the desired waveform.

The motor system closely controls the diaphragm at all times to maintain accuracy. The result is a wide bandwidth transducer that achieves extremely low distortion and has a fast response plus plenty of musical detail and dynamics.

The AMT unit used in the Elysian models is larger and of higher specification than the one used in the EVO4 Series. It features an ultra-lightweight diaphragm material called PET and an acoustically damped rear chamber which delivers clear and extended high frequencies.

In order to match the  sensitivity and accuracy of the AMT treble unit, the design team turned to a proprietary woven glass ﬁbre matrix, formed into a 150mm cone for the midrange driver.

The matrix provides a combination of low mass and high strength and its acoustic behaviour is controlled using a high-plasticity coating. Given the low mass of the cone, a low-damping, foamed, rubber-like material is used for the surround – again, coated for durability.

A central phase plug is specially shaped to linearise the output across a wide bandwidth, even oﬀ-axis, so the music can be heard anywhere the listener wishes to sit.

This combination helps the midrange driver deliver as added realism to voices and instruments, the company claims.

The Elysian 2 features a single 220mm bass driver while the Elysian 4 sports twin units and these are manufactured using the same glass ﬁbre matrix as the midrange driver and are capable of reaching down below 28Hz in-room. They are sited in a highly ﬂexible rubber surround and driven by a specially developed low-distortion motor system.

Aided by Wharfedale’s signature SLPP (Slot-Loaded Proﬁled Port), the lowest frequency energy is vented at the base of the speaker so as to ensure that the rear output of the bass units is not wasted. With lower distortion than typical bass reflex systems, the SLPP is profiled to equalise the high internal pressure to the low pressure in the room and because the air is dispersed uniformly in the room, the speakers are less fussy about siting.

Smoothly bringing together the output form the drivers is a sophisticated crossover network which has been fine-tuned over hundreds of hours of listening tests. All the components within the crossover are the highest grade and acoustically transparent to ensure all the musical detail is present.

Of particular note is the phase consistency across the driver output, permitting a wide range of seating positions and encouraging the power response to be highly linear throughout the listening room

Aiming for a structure that will enhance the acoustic output of the drivers and come across as a piece of furniture, the handcrafted veneers of the cabinet feature a sandwich of woods of differing densities, designed to reduce panel resonance to below audibility. Named PROS (Panel Resonance Optimisation System), this multi-layer construction also inhibits the leakage of unwanted sound energy from inside the cabinet, which would otherwise interfere with the forward output of the drive units.

Moving away from slimline and compact footprints, the Elysian speakers have a wide stature and wide baﬄe which is ﬁnished with radiused edges to smooth the ﬂow of sonic energy around the cabinet.

Speaking about the development of Elysian, Wharfedale’s Director of Acoustic Design, Peter Comeau, said: “Our aim for the Elysian/EVO4 project was to deliver a new flagship for Wharfedale (Elysian) whilst creating design elements that could be trickled down to a more affordable, mid-range series (EVO4).

“While we are justly proud of the value for money offered by the EVO4 Series, the two Elysian models represent the pinnacle of our achievements – loudspeakers that deliver an exceptional high-end performance yet still cost much less than many of the models with which they compete.”

Available in the UK from this month, the Wharfedale Elysian 2 and Elysian 4 come in walnut, black or white and are hand polished to six levels of depth in high-gloss piano lacquer.

What do speaker enthusiasts think of Wharfedale’s new Elysium speakers? Let us know your thoughts in the discussion thread.