Elysian passes on its secrets 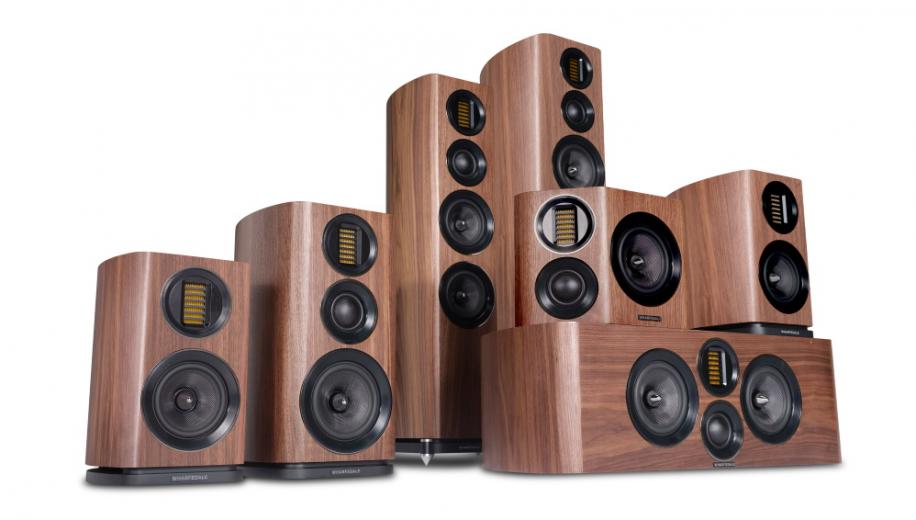 A mixture of features found in products further up the exclusivity ladder along with affordable prices is always a welcome proposition and that’s exactly what Wharfedale are promising with their EVO4 speaker line up.

Developed concurrently with the company’s forthcoming flagship Elysian range, the two series share a family resemblance in their curved sides, substantial cabinets and sophisticated driver arrays. There’s much of the same engineering and technology shared between them and the EVO4 is designed to sit just below its progenitor but above Wharfedale’s existing Diamond 11 speakers.

The range consists of the EVO4.1 and EVO4.2 standmount speakers at £449 and £599 per pair respectively and two floorstanders - the EVO4.3 at £999 per pair and the EVO4.4 at £1,199 per pair. To support home cinema use, there’s the EVO4.C centre speaker which costs £499 and the EVO4.5 is a surround speaker designed for wall mounting at £999 per pair. A more compact centre speaker, the EVO4.CS will be released before the end of 2019.
All of the speakers, bar the entry-level EVO4.1, combine an AMT tweeter, a fabric dome mid-range unit and a bass driver with a Kevlar cone, which gives a distinctive appearance to each speaker since all the drivers looks different.

The AMT unit (Air Motion Transformer) high frequency unit found in the EVO4s has been developed from the one found in the Elysian speakers. Radically different from conventional dome tweeters, it drives a large, pleated, lightweight diaphragm across its surface using rows of magnets. As the diaphragm moves, the pleats expand and contract as the music pushes air between them forming the desired waveform. This approach is an efficient way of moving air and highly accurate since the diaphragm is closely controlled by the motor at all times. The result is low distortion and wide bandwidth which retains details and dynamics.


Matching the speed, response and bandwidth of the AMT treble unit is a mid-range driver that uses a high-flux magnet. The soft fabric dome is damped by a plasticiser coating and is vented into a specially shaped rear chamber which scatters and absorbs rear energy from the dome, which results is a linear response from 800Hz to 5kHz. The wide dispersion of the dome ensures accurate listening anywhere in the room.

Looking after the low frequencies, the EVO4 bass drivers use a woven Kevlar cone fitted with a low-loss rubber surround working with the same low-distortion motor system found in the Elysian range. This provides a wide bandwidth unit that covers lower mid-range frequencies as well as bass. And over two decades of experience working with the strong, yet lightweight Kevlar material has resulted in engineering knowledge adept at producing natural sounding drive units.

Bass response is further enhanced by Wharfedale’s SLPP (Slot Loaded Profiled Port), whereby the lowest frequency energy is vented to a slot at the base of the speaker, specially profiled to equalise the high internal pressure to the low pressure in the room. This results in lower distortion than a typical ported bass reflex systems and because the air is dispersed uniformly in the room, speaker positioning is less critical.

Overall audio output is combined via a computer-modelled crossover network which uses components chosen for their audio transparency, such as high-grade polypropylene capacitors and laminated silicon-iron and air core inductors. After hundreds of hours of testing, the crossover is fine tuned to ensure the blend between the drive units is seamless and phase consistency is outstanding.

Housing this acoustic technology is a series of eye-catching cabinets hand-finished in wood veneers, below which is a sequence of woods of different densities designed to reduce panel resonance beyond the point of perception. This multi-layered construction also helps inhibit internal sound energy which would otherwise interfere with the drive unit’s output.


Speaking about the overall development of the EVO4 speakers, Peter Comeau – Wharfedale’s Director of Acoustic Design – said, “... it’s refreshing to work with the advanced motor systems we’ve incorporated into the EVO4 Series, along with our version of a dome midrange and an AMT treble unit that has grown out of our research for the Elysian project. This Wharfedale speaker range is distinctly different, yet it continues to do what Wharfedale does best: deliver superb material and sonic value-for-money.”

The Wharfedale EVO4 Series is available from October in a choice of black, white or walnut wood veneers.