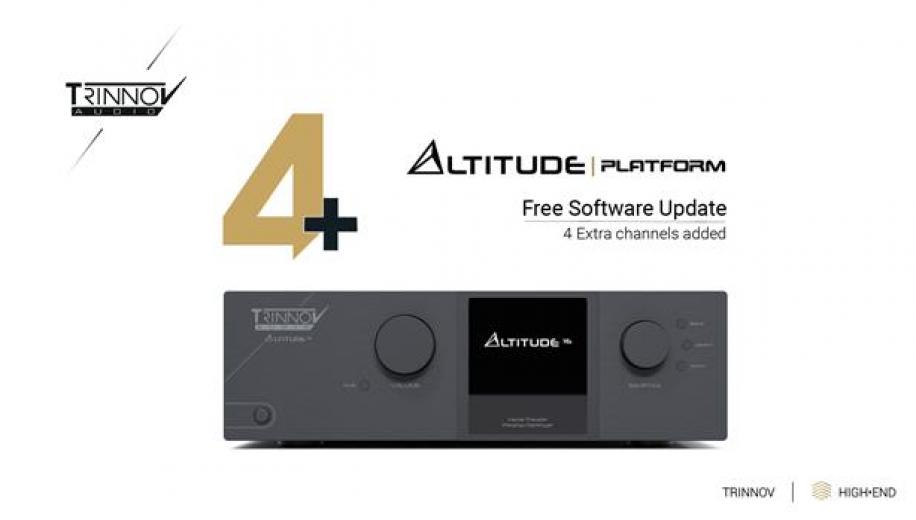 Trinnov Audio has announced that an upcoming update to its Altitude A/V platform will enable four additional output channels and bring IMAX Enhanced certification, at no extra cost.

Leading manufacturer of reference grade audio processors for cinema, studios and home theatres Trinnov Audio will release a software update in mid October which will impart the two major features to every Altitude processor installed globally since 2015.

This means owners of Trinnov Altitude16 and Altitude32 A/V processors will see four extra output channels and IMAX Enhanced support added to their devices for free.

The implementation of additional output channels presented a challenge for Trinnov’s engineers who eventually settled on converting the Toslink output of the Altitude16 to the professional ADAT transport protocol which allows the carriage of four channels at up to 96 kHz. The solution for the Altitude 32 models was to add the four extra channels to the built-in AES/EBU outputs.

To enable the outputs in both of these cases, a simple external D/A converter will be required, something that many enthusiasts may already be in possession of.

Arnaud Laborie, Trinnov Audio co-founder and CEO, confirmed, “For both Altitude models, our customers will need to source a Digital / Analogue converter.”

Once the update has been installed, owners of the Trinnov16 will have new possibilities supported such as the popular 9.4.6 speaker layout, and the low frequency and 3D sound performance can be optimised with the fully integrated calibration suite.

Laborie explained, “Our implementation of immersive sound codecs is unrivaled. We have always been committed to high spatial resolution and we are now taking the extra step to enable this benefit across a higher number of home theater installations by adding four extra discrete and acoustically optimized outputs.”

The upcoming availability of IMAX Enhanced on the Altitude platform comes after months of certification testing and will see Trinnov Altitude processors able to take advantage of the expected increase in IMAX Enhanced native content.

The last few years has seen Trinnov experience unprecedented growth, though the COVID-19 crisis has presented challenges with regards to supply chains. To counteract this, the company has secured a large stock of critical semiconductors, parts and components to help buffer the increased demand for Altitude processors this year.

The company’s press release stated, 'Trinnov is committed to maintaining current pricing as long as possible, even though there doesn’t seem to be any foreseeable improvement in the availability of key components.'

The two new features are expected to be ready by mid-October and will be available to Altitude owners through a free software download.

Trinnov Altitude platform updates due for 2021