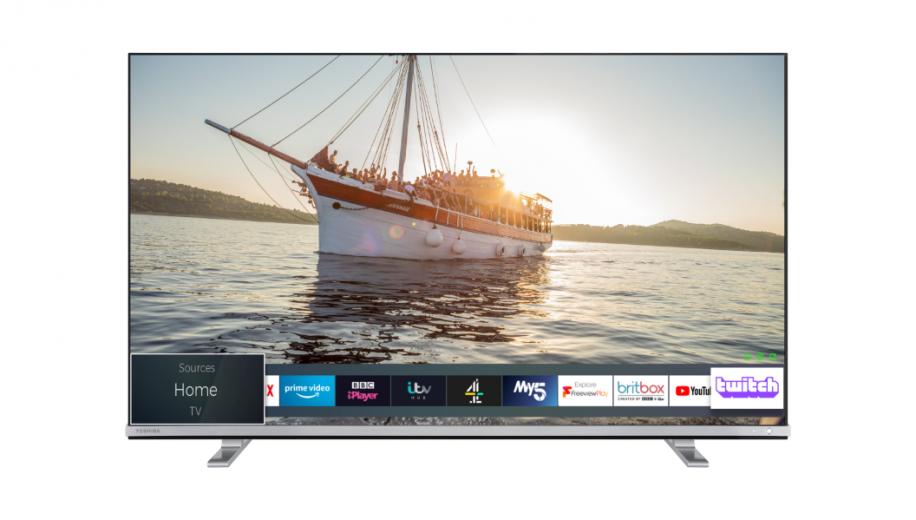 Amazon Music and Twitch will bring 75 millions songs and thousands of live streaming channels to owners of a range of Toshiba’s TVs.

Toshiba has announced it is set to bring two of the most popular content streaming services to UK owners of its TVs.

Amazon Music is available now and has been rolled out to all Toshiba smart TVs across the UK. Viewers who are Amazon Prime members will now be able to access two million hand-curated songs and over one thousand playlists and stations on their Toshiba TV at no additional cost to their membership.

For those that subscribe to Amazon Music Unlimited, the service’s premium tier, full access to more than 75 million songs, as well as many thousands of playlists and stations is available.

Bart Kuijten, Commercial Director at Toshiba TV, said, “We are excited to be able to launch Amazon Music across our range of TVs. With access to Amazon Music, our customers can now enjoy a big-screen audio performance for all the music they love. Whether they want to listen to their favourite tracks, or discover playlists to match their mood, everyone can find what they like.”

The live content streaming Twitch app, which will be available on any Toshiba smart TV produced from June 2018 onwards, including the brand’s Android, and Alexa Built-In models, will bring thousands of live streaming channels via the Twitch platform, covering topics such as gaming, music, sports, talk shows, food/drink and more.

For users with auto updates switched on, the app will be ready and waiting for them in the TV’s Apps section. Navigation has been made easy and using the remote controls’ arrow buttons makes it easy to find streaming content.

The Twitch service is free to join and those with existing accounts can sign-in on their TV and keep up with the latest live broadcasts from the streamers they follow, while enjoying the content on a large screen.

Toshiba will be rolling out the Twitch app in partnership with Defected Records which will provide access to six exclusive streamed magazine shows from the record label’s festival in Croatia which runs from 05-10 August this year.

The Twitch and Amazon Music apps join a lineup of entertainment on Toshiba TVs which includes streaming favourites Netflix, YouTube and Amazon Prime Video. Plus, there's over 20,000 hours of on-demand content from BBC iPlayer, ITV Hub, All 4, UKTV Play and CBS all available through Freeview Play, including 85 live Freeview channels.