At least we had these to enjoy during Lockdowns 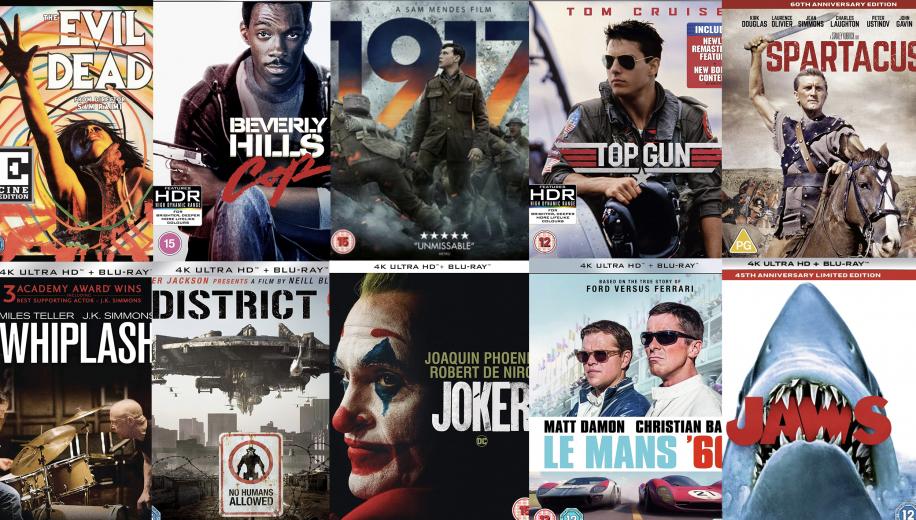 Whilst the year has been a disaster, there have some tremendous releases, new and back catalogue, released; here are our pick of the best (and before you panic about any LOTR-sized omissions, we have put together a separate top 4K box sets / limited editions 2020 list)

Sam Raimi’s The Evil Dead has a huge reputation, gained through notoriety, and is one of the few films of the ‘video nasty’ era not to disappoint on viewing. Taking established horror tropes and turning them up to eleven and covering the screen with splatter in what is an over-the-top excuse in excess; the film is the original and the best.

The 4K UHD set from Sony is great; the picture, considering the source, is amazing, very detailed, well coloured with a tremendous black level, keeping intact the darkness and occasional heavy grain, while the DTS-HD MA 5.1 surround tack is well layered, mixed with strong presence and good bass. The extras package, found on the included Blu-ray, is also very comprehensive.

Although he would go on to become a superstar, this really was one of those last times that we got a young, fresh, enthusiastic Eddie Murphy who was absolutely at the top of his game, commanding this opportunity to finally take the reins in a lead vehicle, and improvising the hell out of the script to make it his own. As the sequels would go to show, there was no bottling lightning here, despite repeated attempts, and it remains one of the greatest action comedies of all time.

Paramount's UK 4K Ultra HD Blu-ray release of Beverly Hills Cop may well prove modestly controversial in its application of DNR, but hopefully most will see just what magic was worked to make the relatively low budget movie look pretty damn great. Sure, there's no soundtrack upgrade, but there really didn't need to be, and the extras were already pretty comprehensive, leaving it a recommendation for fans - or certainly those who didn't pick up the last Collector's Edition. Undoubtedly, the sequels will eventually follow but this one was the only classic. Highly recommended.

Nolan's Dunkirk arguably blended technical mastery with narrative punch more skilfully, but nonetheless Mendes - or rather Deakins - has pulled off something frequently visually stunning here, an oftentimes immersive endeavour which ultimately places gimmickry above greatness, and somewhat ironically becomes most notably great for its gimmickry in the process.

Universal's UK 4K Blu-ray release of 1917 delivers on all fronts technically, with an absolutely tremendous native 4K Dolby Vision (and HDR10+) enhanced presentation and a superb Dolby Atmos track too, as well a some nice extras, leaving this a must-have purchase for fans, and a film that's certainly an unmissable watch.

Paramount's US 4K Blu-ray release of Top Gun ﻿beat the UK disc off the deck by a couple of weeks (finally landing with an identical disc and the perfect companion piece in Days of Thunder 4K), and delivered absolutely stunning native 4K video, complete with Dolby Vision enhancement, as well as a tremendous Dolby Atmos track and some nice new extras too. It's the best of the best, which is what the film deserves.

While Spartacus did have a troubled production, especially during filming, the result has stood the test of time. While Stanley Kubrick was the director, he didn’t have full creative control, and producer/star, Kirk Douglas, made sure he was front and centre; even though it was loaded with acting talent. The story, clichéd as it now might seem, was fresh and epic in 1960, and with Kubrick’s eye and direction went on to win numerous awards, including Oscars. It is bold, brash and thoroughly entertaining, although probably best known for the line, “I’m Spartacus”.

As a 4K UHD set, the package from Universal is pretty good; the native 4K picture is based on the 2015 fully restored version; it is well detailed and has rich, lustrous colours with strong blacks and defiant whites, easily besting the Blu-ray. While the updated DTS:X surround track is well layered and produces a vibrant surround environment with good bass. Even though this is labelled as a 60th Anniversary set, there is nothing new to the extras, which have all been seen before.

Whiplash is a minor modern masterpiece, a little bit like an entire movie based around the first half of Full Metal Jacket, only here repurposed to focus on professional drumming. Simmons absolutely steals the show, and is a force to be reckoned with and it's worth watching for him alone.

Sony's 4K Ultra HD Blu-ray release of Whiplash is an excellent package, delivering impressive video and stunning Atmos enhanced audio, as well as all the old but excellent extras. It comes highly recommended.

A stunning first feature film from writer/director Neill Blomkamp being a multi-nominated and award wining science fiction story, involving a human being absorbed into an alien culture, quite literally, packs an emotional punch, is action orientated and cuts swathes with its rich social commentary. Stunning.

As a 4K UHD, the set from Sony is equally as good; the up-scaled picture is bright, well detailed with vibrant colouring and strong blacks, while the Dolby Atmos track is a surround extravaganza and packs a solid bass punch; add to it a few new extras and you have a winning package.

Joker is not your typical origin story, neither is it a comic book interpretation; it is new, bold and complet﻿ely enthralling. Its influences are worn proudly on its sleeve, director Todd Phillips and lead actor Joaquin Phoenix have created a character that is born from a broken society as much as a broken mind, and the result is all sorts of awesome.

As a 4K UDH Blu-ray, the set from Warner is pretty good; the native 4K image is absolutely stunning in its detail, colour representation and black level, while the English Dolby Atmos surround track engages and immerses being realistic and naturalistic. The only let down are the slightly lack-lustre extras.

A bit of a surprise winner - few could have predicted the welcome Oscar nod for Best Picture, let alone the further three nominations, two of which it won - Le Mans '66 is a very engaging biographical sports drama which has enough heart and soul to enthrall well beyond its core fanbase of racing aficionados, not least thanks to a pair of superb lead performances and keen direction from Logan's James Mangold.

Fox's UK 4K Ultra HD Blu-ray release delivers the goods - and then some - with a stunning 4K video presentation and a loud-as-all-hell Dolby Atmos track, as well as a hefty hour of behind the scenes Featurettes, leaving it a great package that comes highly recommended.

Jaws hardly needs any introduction, a seminal ride spearheading the ‘summer blockbuster’ it also happens to be one of the best films ever made. Combining in a perfect storm, a young, on form, enthusiastic director, a failing prop forcing invention, a tight script, excellent performances and that score and you have a film that once seen is never forgotten.

The 4K UHD from Universal is terrific; the native 4K picture is blistering with absolute detail, incredible colouring and stunning blacks, while the Dolby Atmos surround track adds an extra layer to what is an already top notch sound track. The extra material, whilst not new, is nearly all on the UHD, which makes a nice change!

Please let us know how right or wrong we are, and tell us what you're most looking forward to in 2021 in the discussion!