The Year's Best. Let the arguments...COMMENCE! 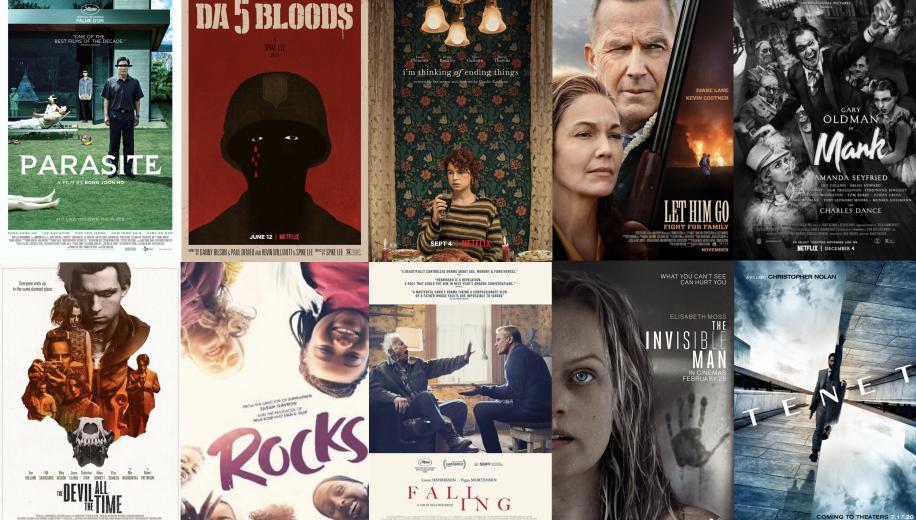 What a rough old year for cinema it's been (only cinema, of course, everything else has been fine and normal) and we've been deprived of some of the most anticipated blockbusters of the year. No Dune, no Black Widow, ﻿no Top Gun. ﻿But dry those eyes, you weirdo, because here's our breakdown of the best movies that did get released.

Chris Nolan wanted so desperately to breathe life back into the cinema that he sacrificed box office takings to bring his latest spectacle to the big screen... either that or he made a grave error of judgement.

Certainly Nolan goes all-out to embrace his temporal trademarks, taking you on a mind-bending, brain-breaking paradoxical palindrome of a journey that is as unique as anything else he's ever done. It sits right up there with Inception and Interstellar in terms of high concept insanity, and comes complete with Dark Knight Rises / Interstellar levels of booming bass and incomprehensible dialogue. His setpieces are tremendous, and this is pure, utter, sheer Big Screen entertainment at its best, but it's not quite Nolan at his best, lacking the heart we have come to expect from him.

Tenet is available to buy on 4K, Blu-ray and digital.

A late entry into the year's Best Of - but an assured and affecting directorial debut from Viggo Mortensen about the ravages of dementia on a family.

This structural awkwardness is rescued somewhat in the direction and editing which pulls back from being choppy and untethered to allow breathing space between bouts of family trauma. There’s a focus on stillness and silence, sometimes to push you to hold your breath in shock, sometimes to allow you to breath deeply. Close-up shots held on Henriksen’s eyes emphasise his growing inner turmoil and confusion; slow shots of farm or woodland bring happiness and calm back into the frame. It’s direction which supports the performances.

Mortensen is master of his craft, and of drawing strong performances out of others and in Falling, he’s given a strong directorial debut which highlights that fact.

Upgrade's Leigh Whannell returned to cinema earlier this year to provide us with a surprisingly excellent reimagining of the old H.G. Wells / Universal Studios monster movie.

The Invisible Man is in its element during the earlier tension-ramping-up stages. It’s fascinating to watch main character Cecilia’s struggle play out – even as we know she’s completely right and totally lucid, watching those around her assume she’s losing her mind is agonising. The portions of the film which take part in Cecilia’s house are sharply taut, well executed scenes of edge-of-your-seat tension. The final third sees the chase spill out onto the street and into a prison, and as blood starts to be spilt the film does start to lose some of the anxiety-ridden focus it’s built up.

Because, as the film shows, it’s the way that ordinary objects and everyday spaces are militarised in domestic abuse that’s the most terrifying part of it. In The Invisible Man, both Cecilia and the audience are suspended in a state of hyper-vigilance in every scene.

Read the Official AVF Review for The Invisible Man here

Drawing favourable parallels with the work of Andrea Arnold, Rocks is Sarah Gavron's semi-improvised chronicle of the teenage experience. Friendship, love, acceptance and tragedy are all laid bare

Heartache and heartbreak abounds, but in a very natural way, with the power often understated, but the claustrophobia immense, as small-scale tragedy echoes throughout. Lead actress Bukky Bukray is great, but Kosar Ali is also integral to the character and narrative deployment, particularly when her best friend role is juxtaposed with the potentially more wayward influence of the new troublemaker who arrives in class. It's powerful and perfectly played, and one of the best films you could easily miss this year. So its launch on Netflix is the ideal opportunity to make sure you don't.

Rocks is available to stream with Netflix

6. The Devil All The Time

A stellar ensemble cast including Robert Pattinson, Tom Holland, Bill Skarsgård and Riley Keough come together to demonstrate that the American Dream is nothing more than a DE-LEW-SHUN.

What The Devil All the Time does most efficiently is to sharply burst the bubble of soft-focus nostalgia for the America of the 50s and 60s, uncritically peddled so frequently by both literature and Hollywood. The childhood of main character Arvin is not bike-riding and adventures with friends and hoping for a pop-gun for Christmas. It’s bullying and narrow-mindedness and mortality of the kind that affects everyone at some point in their lives. Arvin just happens to be the conduit for all of it at once.

In the end, it's an undeniably powerful masterclass in discomfort which makes its point all too effectively.

The Devil All The Time is available to stream with Netflix

If you love cinema and everything that goes into being a cinephile, it’s a pretty ravishing watch. Oldman sucks you in, the visuals knock you out, and the sweeping narrative’s many overarching themes will leave you breathless. The film has recreated Classic Hollywood in painstaking fashion, from the shadowy black and white cinematography to astonishing attention to detail in recreations of the offices of producer Irving Thalberg (Ferdinand Kingsley), or legendary screenwriters Ben Hecht (Jeff Harms) and Charles Lederer (Joseph Cross). Indeed, the film plays out as as much of a biopic of old Hollywood as a biopic of Mankiewicz, though the central figure is never anything less than compelling.

Mank is available to stream with Netflix

An eleventh hour entry into list, this heart-wrenching story of rescue from abuse maintains Kevin Costner's place as a living god of Westerns. It also pairs him with Diane Lane in a weird DC Extended Universe reunion.

Let Him Go's title is almost a boon, as you're going to want to watch this one knowing as little as possible and, if anything, assuming it's just another generic revenge thriller will probably be of benefit when it comes to expectations. Based on Larry Watson's 2013 novel, this will be a defining turning-point in director/screenwriter/producer Thomas Bezucha's career, crafting a staggeringly compelling narrative which draws you in effortlessly, planting those seeds of doubt, building with slow intensity until it's too late, and the darkness comes crashing in.

It's a story which, in one form or another, has been told countless times in the history of cinema, but Let Him Go somehow finds a new angle, investing in its period sensibilities but not getting waylaid by them, and trading in heavy Neo-Western vibes - the kind which would happily see this joining the ranks of gems like Hell or High Water, Wind River and No Country for Old Men.

Read the Official AVF Review for Let Him Go here

Challenging Synecdoche, New York for the title of 'Charlie Kaufman's Most Alienating Film,' this Netflix Original explored the the despair of a life half-lived

From the outset, everything in the production is very carefully engineered to guide you towards making some tentative deductions about who main characters Lucy and Jake really are. Kaufman has really matured as a director and, where Synecdoche and Anomalisa tested the waters using tips from his old partners, Spike Jonze and Michel Gondry, here it really feels like he finally has an understanding of film-making as a holistic process. His careful attention to detail in all elements is clear and his use of colour, depth of focus, cinematography and sound are all working together to create this experience and every element, with the possible exception of his reliance on close quarters filming and the sort-of-unhelpful 4:3 aspect ratio, is a vital clue to deciphering the film.

It's an accurate depiction of irrational thinking. The frustration of feeling like a straightforward answer might be present but just out of reach. It’s an apt reflection of the characters’ headspace.

I'm Thinking of Ending Things is available to stream with Netflix

It’s quintessential Spike Lee – by turns wild, violent, confrontational, messy, emotional, symbolic, funny and outrageous. Viewers can, and most likely will, view this film how they want. It can be seen as a darkly comic, violent meditation on Vietnam with absorbing action and lots of signature Lee style. On its surface after all, it’s a film about a group of former brothers in arms who return to the scene of their truly formative years. But there’s also a significant commentary on questions of war, patriotism, trauma and memory at play, as well as a powerful exploration of how Blackness is used, ignored, perceived and exploited that couldn’t come at a more poignant (or ironic) time.

Da 5 Bloods is available to stream with Netflix

Bong Joon-ho's story of two families wrapped up in each other's lives made history earlier this year as the first foreign language film to win Best Picture at the Oscars. Not only that, it's one of the greatest films of the 21st Century.

It's impressive that they have put together such a clever piece which works on so many... levels. You can enjoy it for the sheer audacity of the con - 'enjoy' being used loosely, since the tension can get absolutely unbearable - or you can contend with the varying emotions from what's going on underneath. Sure, these are largely amoral con artists that you shouldn't really be rooting for, but there's something quite interesting about seeing them revel in things that 'the rich' don't ever really stop to look at. And when you see father Kim's face when he realises just how much these privileged people look down at those below them, it's hard not to - almost unbelievably - feel some empathy.

Uncut Gems - Adam Sandler does one of his once-a-decade 'real acting' roles in this film by the Safdie brothers. It's basically a 2 hour heart attack...which is good?

Vivarium - This low profile flick about a couple stuck in an endless housing estate to be observed by outside forces was one of the most accurate depictions of parenthood ever committed to screen... Excuse me, I have to get back to digging the hole now.

Finding the Way Back ﻿- An extremely personal venture for Ben Affleck who gives one of the best performances of his career as a recovering alcoholic who steps into the position as basketball coach at his old highschool.

Saint Maud ﻿- It's always good to see a new star rising in the terrifying constellation that is A24's horror output. This troubling story of religious zealotry and madness brought us one of the strongest final scenes in cinema this year.

Greyhound - Apple's great experiment this year was with the purchase of this taut Tom Hanks WW2 naval thriller. It certainly worked out well for them with this masterpiece of structure and tension with Hanks as both star and co-writer.

The Lighthouse - Robert Eggers (The Witch) wrote a screenplay based very loosely on an unfinished Edgar Allan Poe story using dialogue from 150-year-old lighthouse keepers' logs and delivered ﻿one of the strangest, most compelling films of the year. One that most people will turn off long before Willem Dafoe invokes the name of Poseidon at full volume.

Please let us know how wrong we were and tell us what you're most looking forward to in 2021 in the discussion!