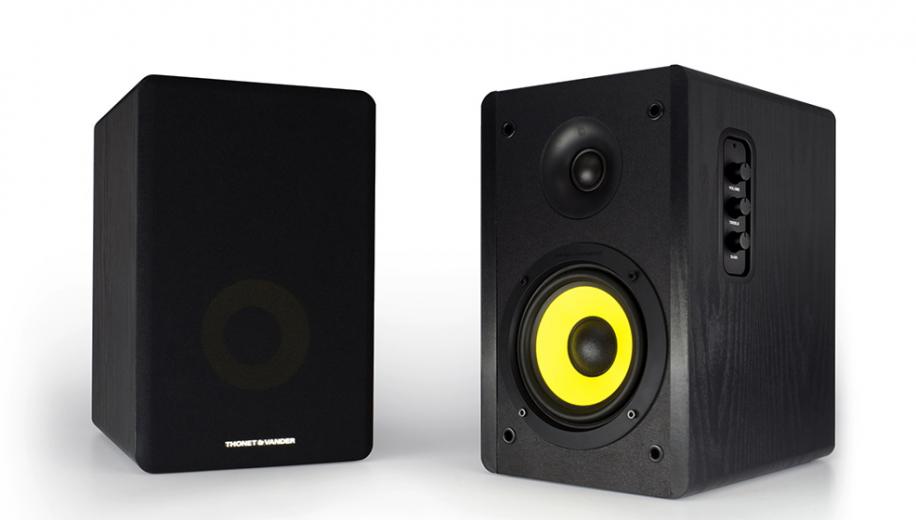 German audio brand, Thonet & Vander has launched their latest bookshelf studio monitors in Europe - the Kurbis Bluetooth speakers, featuring Hammer Bass technology.
Available for £149.99 the Kurbis features an integrated amp that provides 340 watts of distortion free power to deliver a balanced range of frequencies with the bass holding firm even at full volume. This is down to the Hammer Bass technology that Thonet & Vander has implemented, which the company claims magnifies the impact of the bass frequencies in conjunction with Drone FX, which enhances the detail across the entire frequency spectrum.

Behind the mesh protection, the sound itself is delivered via the 5.2-inch, bass enhancing woofer which is constructed entirely from aramid fibre, as well as the one inch silk tweeter for the issue of the high frequencies. Additionally, there’s a Bass Reflex resonance system designed to increase the bass response of the controller and optimise the efficiency and performance of the low frequencies.

The Kurbis cabinets are made from a high density, natural polymer called HDAA. This creates a rigid and dense structure which reduces vibration and prevents sound leakage leading to a more accurate and efficient performance which can be sustained for longer. Connectivity is via the stereo RCA input or 3.5mm jack and wireless connection uses Bluetooth 4.0 to allow streaming from smartphones, tablets and laptops.

There are tactile rotating knobs to adjust volume and basic EQ and the speakers also work with Amazon Echo and Google Home devices allowing voice commands to control volume and playback.