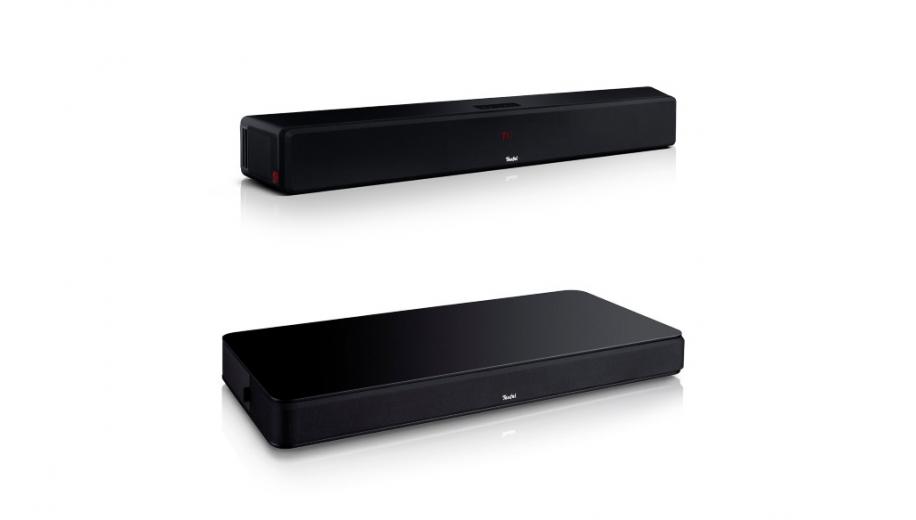 How often do companies really listen to their customer’s feedback? Well, Teufel invited responses to their current lineup of soundbars and have acted on a clear call for plenty of bass in TV audio products - but without a subwoofer. Enter the Cinebar Ultima and Cinedeck.

Teufel, one of Germany’s largest manufacturers of audio products, has plenty of soundbar solutions but many of them, such as the Cinebar 52 THX or Cinebar Pro, come with a subwoofer. This is great for the half of the survey respondents that want a separate sub for their low end oomph but is not what the other half, who clearly state that they want low end but without an additional black box, is looking for.

Taking all this on board, Teufel has added the Cinebar Ultima and Cinedeck soundbars to their lineup to cater for this side of the consumer spectrum.
Both devices forego the requirement of an additional subwoofer, by using internal bass drivers which produce a neighbour friendly bass response down to 50Hz. However, should the desire for just a little more bass power or a move to a larger space ever feature in your future thinking, then the option exists to add a wireless sub, as well as additional wireless rear speakers such as Teufels’s Effekt range - thus covering all options going forward.

Both the Cinebar Ultima and Cinedeck also employ Teufel’s Dynamore Ultra technology which widens the audio horizontally in conjunction with side-firing drivers to create an enveloping surround sound.

Cinebar Ultima
Teufel's Ultima speaker series now sees the Cinebar Ultima join it as the only soundbar in the range and thus shares various design cues such as the wooden casing and iconic copper-coloured woofers, which can be on permanent show since the magnetic fabric covers are removable. The Cinebar Ultima contains six speakers - four 3.5-inch full-range drivers and two oval bass drivers (8 x 4 inch). Two of the full range drivers are located on the sides of the soundbar to make full use of Teufels’ Dynamore Ultra surround technology.
A high-quality metal remote control allows complete control and a large display on the front panel shows the current input and volume.
The Cinebar Ultima is now available in black and white.

Cinedeck
Providing a space saving alternative to the Cinebar Ultima (and other Teufel soundbars) is the Cinedeck which can be placed directly underneath the TV.

The low profile of the Cinedeck means that smaller sized speakers are used and the full complement includes seven full range drivers and two 5.25-inch woofers that point downwards. Five of the full-range loudspeakers face the front - two each for the left and right channel and one as a dedicated centre for optimum dialogue intelligibility. The remaining two drivers are built into the sides of the unit to deliver surround sound via Dynamore Ultra.
Like the Cinebar Ultima, a remote control enables full control of the Cinedeck with feedback provided by the large dot matrix display.
The Cinedeck comes in a black and white finish.

For consumers who wish to grow their TV sound system, both units can be paired with the Effekt rear wireless surround speakers and the T8 or T10 wireless subwoofers from Teufel.