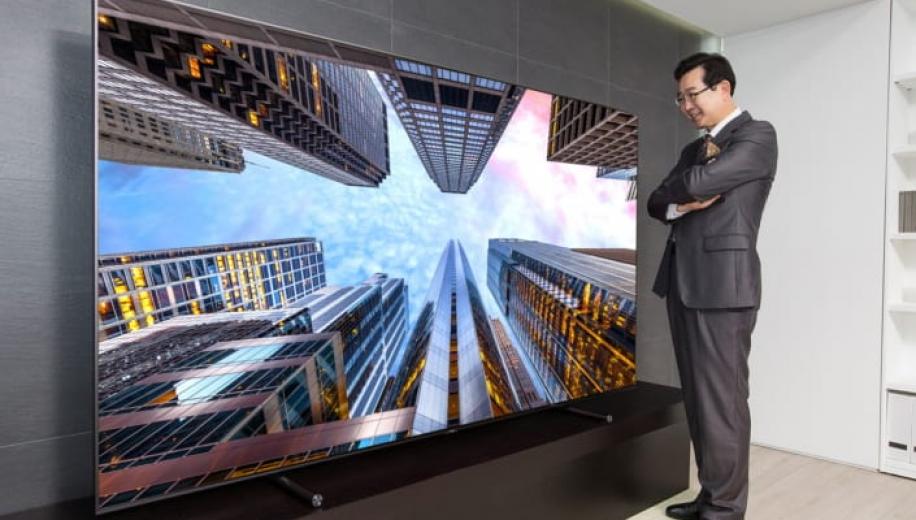 When it comes to TVs, most fans would agree that, all things being equal, bigger is better. In the so-called ultra large TV market of screen sizes above 70-inches, Samsung and LG Electronics are making sure South Korean TV manufacturing stays on top.
Coming second, China’s burgeoning TV industry pushes Japan's electronics firms into third place.

Figures reported by industry information provider, IHS Markit, show that South Korean companies sold 499,700 units in the global, ultra large TV category during the first quarter of 2019 - this accounts for almost 58 per cent of the market share and was split between Samsung and LG with figures of 287K and 212K respectively.

As premium large sized TVs have become more popular, so the last few years have seen an interesting turn around for manufacturers in the segment. Back in 2017, the annual sales in the large TV market had Japanese companies just edging into first place with 857K units sold, representing a 42 per cent market share. However, just one year later, that figure had decreased slightly to 737K while the market share it represented shrank to 23 per cent. South Korean producers meanwhile had exploded from 826K to 3.2M as the overall ultra large TV market surged by 134 per cent.

As the South Korean producers continue to solidify their lead going forward in 2019, so the Japanese manufacturer’s position has now come under threat from China’s competitive TV industry. During Q1, sales of 70-inch plus screens from Chinese sources reached 152K units versus those of 135K from Japanese firms.

This sees low sales among name Japanese brands with Sony only managing a small increase of 13 per cent over the same period the previous year and Panasonic showing no growth at all. Compare this with China's TCL, whose sales nearly quintupled to 46K in Q1 2019 from 10K during the same period a year earlier.

IHS Markit predicts that the 70-inch plus screen size sector will continue to show strong growth with overall sales of 4.7M expected this year, up 47 per cent from 2018 and increasing to 8.5M in 2023.

Similar healthy growth is predicted for the premium OLED panel TV as estimates put sales figures around 14.2M units in 2024 which is almost 4 times higher than the 3.6 units for 2019 and represents a market share increase from 1.3 to 4.9 per cent in five years.

This must sound like good new for LG who has built its business model around increasing sales of OLED panels.

Are you planning an upgrade to an ultra large TV? Drop in on the discussion thread to let members know what models you’re looking at and see if it fits in with the information reported above.