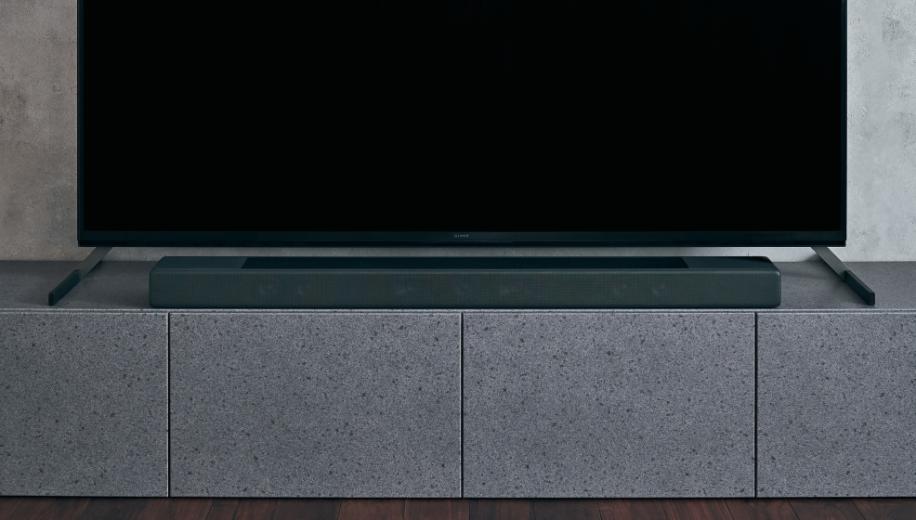 The HT-A7000 is Sony’s latest flagship soundbar featuring a 7.1.2 channel layout, optional subwoofer and rear speakers and the latest surround sound format support including its own 360 Reality Audio platform for spatial music.

Sony’s new soundbar is packed with two up-firing speakers for overhead sound plus two beam tweeters and five front speakers for wider surround, all of which feature an X-Balanced Speaker Unit in a unique rectangular shape to maximise the area of the speaker diaphragm for punchier bass and greater vocal clarity. The HT-A7000 also includes a built-in dual subwoofer for enhancing bass.

The overall Omnidirectional Block concept provides a cohesive look with rounded edges which matches the optional speakers that are also available.

Compatible with both Dolby Atmos and DTS:X object based surround sound platforms, the HT-A7000 employs Sony’s Vertical Surround Engine which can position sound in vertical space alongside S-Force PRO Front Surround for a wider spread of sound, resulting in increased audio immersion.

The HT-A7000 has been launched at the same time as Sony’s brand new 4 speaker HT-A9 home theatre system and both products share a number of features to create the most immersive and up to date entertainment experience possible.

Both support 8K HDR, 4K120, eARC and Dolby Vision, ensuring the most realistic gaming and movie experiences with the HT-A7000 featuring two HDMI 2.1 inputs while the HT-A9 has a single input on its connection box.

The HT-A7000 and HT-A9 are the latest speaker systems to support Sony’s 360 Reality Audio (after the SRS-RA5000 and RA3000 wireless speakers) allowing music that has been mixed or remastered in the format to be experienced beyond just using headphones. To get hold of 360 Reality Audio tracks, a subscription is required to Amazon Music HD, Deezer, nugs.net or TIDAL, all of which are supported - though the latest update is required on the HT-A7000.

Away from 3D sound fields, good old stereo is available with Hi-Res Audio support. In addition, DSEE Extreme technology uses Edge-AI to allow for real-time restoration of all your compressed digital music files to restore any high-range frequencies lost during the compression process.

Unsurprisingly, the HT-A7000 and HT-A9 have a few tricks up their sleeves when used with Sony’s latest Bravia TVs, such as the Z9J, A90J, A80J and X95J series, where the Bravia Acoustic Centre recognises the speakers and synchronises them to use the TV speakers as an additional centre channel.

Both the HT-A7000 and HT-A9 can be paired with additional subwoofers to go deeper with the bass. Both systems will connect wirelessly to either the 300W SA-SW5 sub which has a 180mm driver with a passive radiator or the smaller 200W SA-SW3 compact bass reflex subwoofer with a 160mm driver. The HT-A7000 can also pair with the SA-RS3S wireless rear speakers which bring an extra 100W to enhance surround sound field when placed behind the viewer.

Sound Field Optimisation uses built-in microphones to measure the height and width of the room as well as the position of the soundbar to optimise the sound for your room layout. The feature can be used with or without the additional speakers.

Availability for the HT-A7000 soundbar, SA-SW5 and SA-SW3 subwoofers and SA-RS3S wireless rear speakers will be from September 2021.

Prices are expected as follows: