The new line-up looks good but what happened with Dolby Vision? 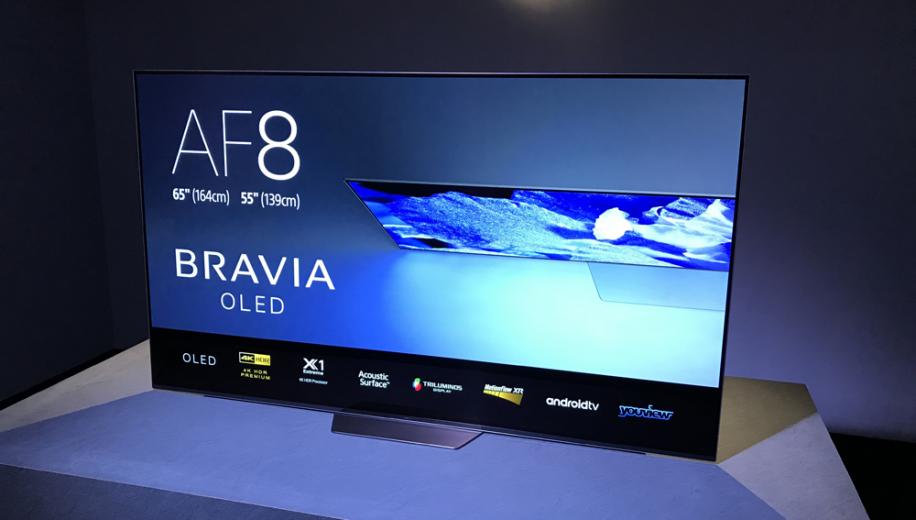 Sony launched their full UK line-up of OLED and LCD TVs for 2018 at press event held at their Weybridge head office.
There were very few surprises at the launch because Sony had already revealed their 2018 line-up at CES but it did give us a chance to get our first look at the new XF85 and XF80 models. As previously announced the A1 remains Sony’s flagship OLED TV for 2018 and the, for the third year in a row, the ZD9 remains their flagship LED LCD model.

However, Sony has expanded the BRAVIA OLED line-up with the addition of the AF8, which they say uses the same panel as the A1 and offers exactly the same picture quality thanks to the inclusion of Sony’s 4K HDR Premium X1 Extreme picture processing engine. That means the AF8 will ultimately support Dolby Vision, along with other versions of High Dynamic Range like HDR10 and Hybrid Log-Gamma. The AF8 uses a Triluminos display, X-Reality Pro and Motionflow XR, along with Sony's Android Smart TV platform which includes support for Chromecast and YouView. It also has their Acoustic Surface technology where the panel is the speaker – Sony calls this the One Slate concept which eschews all visible speakers.

In fact the only difference between the A1 and the AF8 is that the latter uses a different chassis, dropping the 'Easel Stand' of the flagship, in favour of a more traditional approach. This new stand not only simplifies setup, uses a smaller footprint, accommodates a wider range of locations and allows for a closer fit when wall mounting but also ensures the AF8's screen is level rather than at an angle, which is sure to please many enthusiasts.

The only other difference is that to accommodate the simplified stand, the AF8 uses two smaller subwoofers at the rear, rather than the one large one located within the rear stand of the A1. However Sony promise that the sound quality from the acoustic surface will be identical between the two models despite this minor difference. The AF8 will come in two screen sizes, the KD-55AF8 and the KD-65AF8 but unfortunately Sony were unable to confirm when the AF8 will start shipping or how much it will cost. If Sony is to believed, the differences in their OLED line-up are purely cosmetic, however the changes to their LCD range are more significant. Aside from the ZD9 remaining the flagship model in 2018, there will also be no replacement for either the full array XE94 or the edge-lit XE93.

This means that the full array XF90 is the big new addition to Sony's LCD line-up in 2018. However Sony have made some changes to the XF90 which still uses an LCD 4K panel with a full array LED backlight and local dimming, just like last year's XE90, but now includes the X1 Extreme processor. This means that the XF90 is classed by Sony as 4K HDR Premium and will ultimately support Dolby Vision, along with HDR10 and Hybrid Log-Gamma. The XF90 uses a native 100Hz panel and includes X-tended Dynamic Range, XDR Contrast, X-Reality Pro and a Triluminos display. It also comes Sony's Android Smart TV platform which includes support for Chromecast and YouView.

The XF90 features X-Motion Clarity which is unique to this model and is designed to deliver the benefits of Black Frame Insertion (BFI) whilst simultaneously maximising the light output. As the screen size gets larger, it becomes easier to notice motion blur, especially in fast-moving scenes, and X-Motion Clarity is designed to solve this issue by using technology that keeps fast action images smooth and clear. The X-Motion Clarity technology utilises Sony’s proprietary direct LED local dimming and backlight boosting algorithm to control the luminance and optimise its duration. The X-Motion Clarity feature analyses the images and uses the local dimming backlight to boost the brighter areas of the image, thus mitigating the dimming effects of BFI. Sony said that X-Motion Clarity could be used with both SDR and HDR, as well as Game mode, but they have no plans to include the feature with any other models.

The inclusion of the X1 Extreme processor and X-Motion Clarity makes Sony’s XF90 one of the more interesting LED LCD TVs launched this year. The XF90 will be available in four screen sizes, the KD-49XF9005, the KD-55XF9005, the KD-65XF9005 and the KD-75XF9005 but once again Sony wouldn't comment on when the XF90 will start shipping or its price. Whilst the XF90 is getting a significant upgrade this year, the rest of Sony’s LED LCD range is very similar to 2017. The XF85 still uses a native 100Hz LCD 4K panel with an edge LED backlight, except for the 85-inch model which will use direct LED backlighting although it won't have local dimming. The XF85 also features the 4K HDR Processor X1 with Object-based HDR remaster and Super Bit Mapping 4K HDR technology. a Triluminos display, X-Reality Pro and Motionflow XR 800Hz. Aside from support for 4K and HDR10, the XF85 will also include Sony’s Android Smart TV platform which includes support for Chromecast and YouView. The XF85 will be available in six screen sizes, the KD-43XF85005, the KD-49XF8505, the KD-55XF8505, the KD-65XF8505, the KD-75XF8505 and the KD-85XF8505 but once again Sony have yet to confirm pricing and availability. The final model in Sony’s 2018 LCD 4K TV line-up is the XF80 which uses a 50Hz LCD 4K panel and edge LED backlighting. It will also include 4K X-Reality PRO and a TRILUMINOS Display, Dynamic Contrast Enhancer and Motionflow 400Hz. The ultra slim design comes with a narrow aluminium frame and clean cable management for table top mounting, along with support for HDR10 and Sony’s Android Smart TV platform with Chromecast and YouView. The XF80 will be available in three screen sizes, the KD-43XF8005, the KD-XF8005 and the KD-55XF8005 but pricing and availability has yet to be confirmed.

All of Sony’s 2018 TVs include their Android Smart TV platform and will initially ship with the Nougat operating system. To provide a better user experience, they also work with smart speakers like Amazon Echo, Google Home and the latest models from Sony, which enables users to control TV via voice and without having to use their hands. However Sony didn't demonstrate any of their latest smart features at the press launch.

Since CES Sony has begun the US rollout of the Dolby Vision firmware update for their 2017 TVs that use the X1 Extreme processor – that’s the 93E, X94E and ZD9 LCD TVs and the A1 OLED. However the Dolby Vision HDR support on these models is currently limited to streaming apps and isn’t applicable to HDMI sources.

Apparently this is because Sony adopted a ‘low latency’ Dolby Vision profile, created specifically by Dolby to implement in Sony TVs. The reason for this appears to be because the hardware for Dolby Vision wasn’t fully in place on Sony’s TVs and this low latency profile is something of a compromise between Sony and Dolby.

This low latency profile requires more pre-processing to be carried out by the source devices, whereas with other manufacturers, most of the processing work is undertaken by the TVs themselves. As a result, the manufacturers of Dolby Vision sources and other devices that support Dolby Vision like AV receivers will require firmware updates to ensure their devices work with this new profile. Of course Sony’s new X700 Ultra HD Blu-ray player already supports the new profile, making it the obvious choice for owners of Sony TVs.

Although it is understood that the quality of Dolby Vision HDR experience will not be affected once the firmware is in place, the rollout has been poorly handled by Sony. It must be particularly frustrating for Sony TV owners to wait nearly a year for their Dolby Vision update and then discover it isn’t fully supported yet. Although Sony’s notes on the update did state that: “For third party branded Ultra HD Blu-Ray Disc Players, check with the manufacturer for questions regarding the Dolby Vision feature in association with your Sony TV,” their actions could hardly be described as transparent.

Unfortunately if you’re planning on buying a 2018 Sony model that uses the X1 Extreme processor, that’s the AF8 and the XF90, your new TV still won’t support Dolby Vision out of the box either. That's because Sony don't appear to be particularly confident that the Dolby Vision upgrade will actually roll out in February as originally planned. Sony refused to comment on Dolby Vision at the launch event but it appears they are beta testing their Dolby Vision update in the States and until that works properly they won't start rolling out in other territories. The chances are that by the time the new TVs start shipping the Dolby Vision update will have rolled out in Europe and all new owners of the AF8 and XF90 need to do is immediately update their firmware. That's the plan at least but let's hope that 2018 owners won't have to wait as long as their 2017 counterparts.
To comment on what you've read here, click the Discussion tab and post a reply.
News Discussion (519)