An umbrella of sound 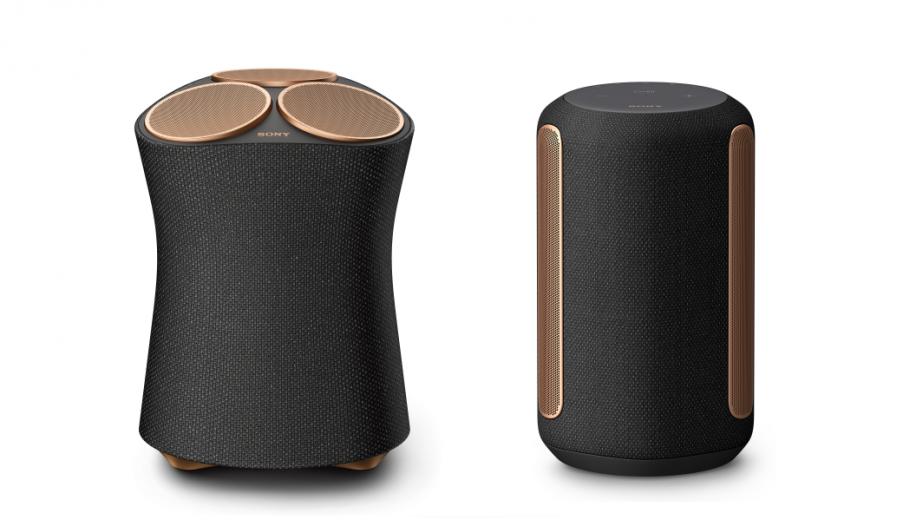 The two new speakers both come with an eye catching black body and contrasting copper highlights while the more compact RA3000 also sports a lighter grey fabric finish with silver accents - it is also humidity resistant so can be used in kitchen and bathroom environments.

Designed to deliver room filling 2-channel audio, the SRS-RA5000 and SRS-RA3000 make use of unique spatial sound technologies based on Sony’s Immersive Audio Enhancement and 360 Reality Audio to project sound vertically and horizontally to create a broad and wide sweet spot.

The larger RA5000 is Hi-Res Audio certified to handle high resolution audio playback through its trio of up-firing and 3 additional horizontal firing speakers, sited in the middle of the body. The speaker unit uses high-magnetism neodymium magnets and a mica reinforced cellular diaphragm that bestows both speaker strength and a compact size. There’s also an incorporated subwoofer to handle the lower frequencies.

Both speakers feature Sound Calibration for optimal performance irrespective of their position. The RA3000 will perform an auto adjustment every time it is switched on, so even if it has been moved between listening sessions, it is always producing the best possible sound. The RA5000 will perform a detailed calibration upon a press of the Immersive Audio Enhancement button, which initiates the process.

Auto Volume adjusts the sound track-by-track to achieve a consistent volume so there’s no more diving for the remote when a new song starts at an unexpected volume.

Hands free control of playback and volume is possible using voice assistants courtesy of compatibility with Google Assistant enabled devices as well as Amazon Alexa enabled devices. Both devices can support multi-room playback via speaker groups set up with the Google Home or Amazon Alexa apps.

Control is also possible from anywhere in the house using the “Sony | Music Centre” app on your smartphone, with customisation made easy for an individualised sonic experience.

Owners of applicable Bravia TVs will be able to enhance their TV’s sound by connecting to the RA3000 and RA5000 speakers using Bluetooth. Connectivity is also possible for both speakers via home Wi-Fi and NFC, while Spotify Connect and the built-in Chromecast enable streaming from tablets and smartphones.