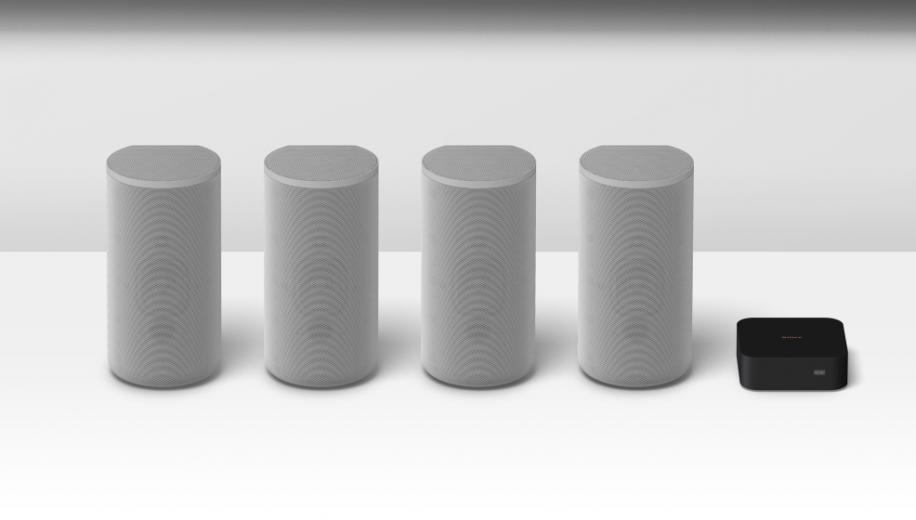 Sony is rolling out more hardware to support its 360 Reality Audio format in the form of the HT-A9 home theatre speaker system.

The HT-A9 consists of four cylindrical speakers, each about 12-inches tall which wirelessly connect to a small control box. The speakers themselves feature a new Wide Directivity Woofer which works in conjunction with the 19mm soft dome type tweeter to reproduce clear, natural sound at high frequencies. With X-Balanced Speaker Units that maximise the diaphragm area, up-firing drivers to bounce sound off the ceiling and Dolby Atmos and DTS:X support, the effect is one of truly immersive audio.

However, the HT-A9 doesn’t stop there in its pursuit of convincing immersion. Sony’s Sound Field Optimisation measures the relative height and position of each speaker so that Spatial Sound Mapping can synthesize sound waves to create up to twelve phantom speakers from just the four original speakers, effectively extending the sound field as wide as possible, resulting in what the company is dubbing 360 Spatial Sound.

Moreover, the HT-A9 speakers are designed to be placed virtually anywhere within the room - though remember they will still require a power outlet - with the unit’s flat back and light pearl grey colour designed to blend perfectly against walls. There’s no need to spend time perfecting their placement as the dual microphones in each speaker and Sound Field Optimisation technology make sure the immersion is always optimal.

The wireless connection box has a single HDMI 2.1 input unlike the new HT-A7000 soundbar (which has been launched simultaneously with the HT-A9) which features twin HDMI 2.1 ports. Thus both support 8K HDR, 4K120, eARC and Dolby Vision ensuring the most realistic gaming and movie experiences.

There are a number of other shared features between the two products too including support for Sony's 360 Reality Audio. This means music that has been mixed or remastered in the format can be experienced beyond just using headphones. To get hold of 360 Reality Audio tracks, a subscription is required to Amazon Music HD, Deezer, nugs.net or  TIDAL, all of which are supported.

Hi-Res Audio is present and DSEE Extreme technology uses Edge-AI to allow for real-time restoration of all your compressed digital music files to restore any high-range frequencies lost during the compression process.

The HT-A7000 and HT-A9 have a few tricks up their sleeves when used with Sony’s latest Bravia TVs, such as the Z9J, A90J, A80J and X95J series, where the Bravia Acoustic Centre recognises the speakers and synchronises them to use the TV speakers as an additional centre channel.

The HT-A9 can be paired wirelessly with additional subwoofers for deeper bass and there’s a choice of either the 300W SA-SW5 sub which has a 180mm driver with a passive radiator or the smaller 200W SA-SW3 compact bass reflex subwoofer with a 160mm driver.

Availability for the HT-A9 home theatre system, SA-SW5 and SA-SW3 subwoofers will be from September 2021.

Prices are expected as follows: