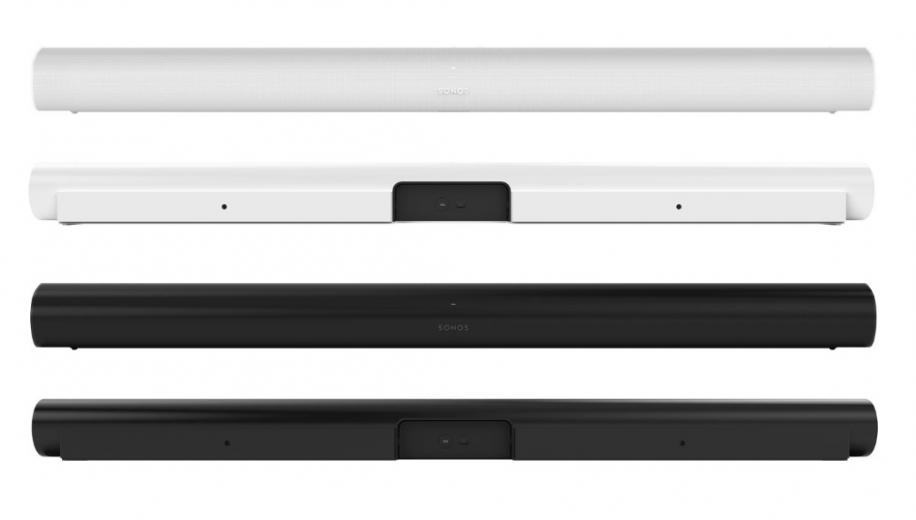 Sonos first launched the Playbar soundbar back in 2013 and the intervening years have seen strong competition from rivals. Now the multi-room audio pioneer is back with a replacement - the Arc soundbar which features the long awaited addition of Dolby Atmos.

The Arc comes in as a replacement for the Playbar and also 2017’s PlayBase, which was a flattened soundbar upon which the TV could stand. However, the Sonos Beam continues in the company’s portfolio as it is more suited to smaller sized TVs than the 114cm long Arc.

Representing the first of the company’s new speakers which are designed from the ground up to work with Sonos’s imminent S2 software platform, which adds support for higher resolution audio, the Arc is available in black or white, which is about as adventurous as Sonos gets with its colour schemes, and features an elliptical design with a matching 270° curved grille.

The newly implemented Dolby Atmos support uses 11 drivers in the form of 8 woofers, including two which are upfiring and two which are side firing, along with 3 silk dome tweeters. The company claims that these have been tuned by Oscar winning sound engineers to make sure the human voice stays crystal clear within the sound field.

Adjustments can be made to refine the Arc’s sound output via the Sonos app including further speech enhancement and the neighbour friendly Night Sound which tempers loud effects such as explosions. There’s also the ever present Trueplay tuning technology which can be used to tweak the Arc’s acoustic profile based on the room. It can also automatically adjust its playback profile based on the audio input received, whether stereo, Dolby Audio 5.1 or full Atmos.

The Arc can be placed in front of the TV or wall mounted using an optional mount which costs an extra £69 and connects to the TV using HDMI eARC or ARC.

A far field microphone allows voice control of the soundbar since both Google Assistant and Alexa are built-in. Of course volume control is always available via the Sonos app on your smartphone or tablet.
﻿

﻿The inclusion of Airplay 2 means that content such as music and podcasts can be streamed from iOS and MacOS based hardware to the Arc and it will also stream music from a large number of sources such as the new Sonos Radio service, Spotify, Apple Music and others over Wi-Fi.

Since the Arc can be incorporated into a Sonos based multi-room setup, it can be paired with a Sonos Sub and other speakers such as Sonos Ones to increase the cinematic immersion.

And as if to emphasise the interconnection possibilities, Sonos has also released an updated version of the Play:5 called the Sonos Five, along with a third generation of its subwoofer, called Sub (Gen 3). The changes for both of these speakers include an updated processor for use with the more advanced features of the S2 platform, improved Wi-Fi handling and the inclusion of Bluetooth Low Energy. Both are available in black or white.

Sonos will be hoping that the launch of three brand new products along with the impending release of the S2 version of their audio platform will help them move on from the confusion over the recycling requirements when using its recent Trade-In scheme and the unpopular news that several of its longstanding hardware units will not be supported by the new S2 platform.

What do readers think of Sonos’s latest releases? Drop into the discussion forum and let us know.