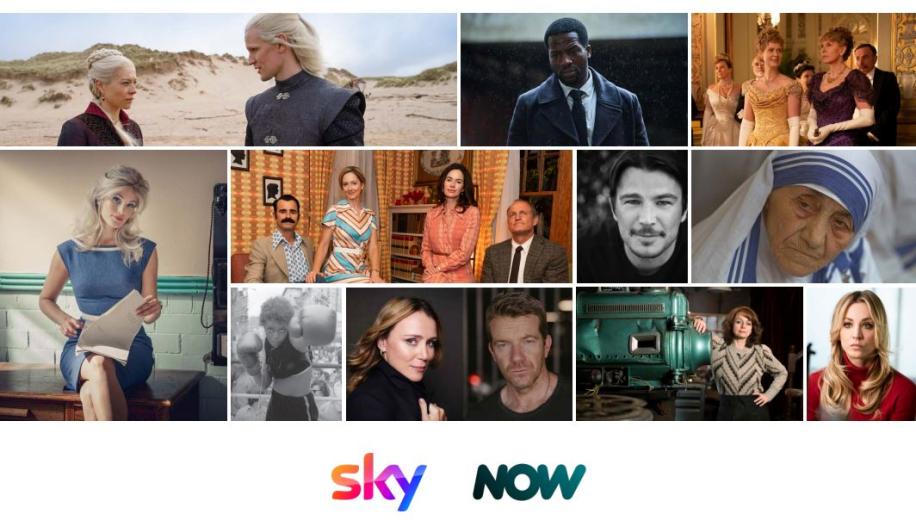 Sky has given a peek at what it has planned for subscribers and NOW customers in 2022 with a host of brand new series, both homegrown and from international partners, plus plenty of returning favourites as well as documentaries and original entertainment.

As competition for viewer loyalty and new subscribers continues to escalate in a broadcasting market now groaning under the burden of several major streaming services plus a multitude of smaller ones, Europe’s leading media and entertainment company Sky is finishing off 2021 by pulling back the curtain on its range of offerings promised for next year.

Let’s Get the Party Started

We’ll get into more details on January’s lineup in our forthcoming ‘What’s new on Sky and NOW for January 2022’ listing but the starting lineup for 2022 features a couple of high profile series making a comeback. There’re second seasons for The Righteous Gemstones and HBO’s teen drama Euphoria starring the in-demand Zendaya, and the third and final season of A Discovery of Witches sees Matthew and Diana searching for the missing pages from the Book of Life.

Brand new series A Gilded Age is another period tale from Gosford Park/Downton Abbey scribe Julian Fellowes, this time set in 1880’s New York amongst the well-to-do socialites with their strict rules and conventions.

Movie-wise, 2022 kicks off with the hard hitting Mass starring Jason Isaacs and Martha Plimpton as the parents of a child slain in a school shooting meeting the parents of the perpetrator. There’s also Save the Cinema, starring Samantha Morton and Tom Felton, which tells the story of the real life campaign to save a beloved local fleapit from the bulldozers.

So that gets things underway in January but there’s plenty more to look forward to as the hugely popular Gangs of London returns for a sophomore season (at least for those characters that survived the brutal first season!). Also coming back for more are second swings from big hitters Raised by Wolves, The Flight Attendant, the BAFTA nominated I Hate Suzie, Devils and the next batch of episodes for The Nevers. Plus comedies Bloods and Avenue 5 return for follow ups to their debut seasons, as do Frayed and Tim Minchin starring Aussie dramedy Upright.

Of course, how you feel about the return of some of these shows will be entirely dependent on your thoughts about them first time round but some of the best TV series need a season or so to iron out any niggles.

Slightly more matured are return outings for Westworld and Babylon Berlin, both hitting their stride with season 4, whilst there’s also confirmation of a fourth stretch for one of Sky’s biggest original comedies as Vinnie and the gang reform for Brassic, which probably won't land until much later in 2022 given that season three has only just aired.

Meanwhile, German production Das Boot, starring Game of Thrones’ Faceless Man Tom Wlaschiha, surfaces for a third voyage and Sky Original comedies Breeders and Code 404 get a third run round the block too. Bill Hader also returns in season three of Barry, starring as the low-rent hitman from the Midwest hoping to start again as an actor in LA.

So that’s all well and good for old favourites but what about brand new content?

Probably one of the most anticipated series due in 2022 is the Game of Thrones prequel show House of the Dragon set 200 years before the main GoT timeline and which charts the fortunes of the House Targaryan with its starry cast including Matt Smith, Olivia Cooke, Paddy Considine and Rhys Ifans.

Hugely popular novel The Time Traveler's Wife, already adapted as a 2009 movie, makes a further transition under the guidance of Stephen Moffat as it comes to Sky Atlantic in the form of a series bearing the UK spelling of ‘traveller’ and starring Theo James and Rose Leslie as the married couple who have a unique problem in their marriage.

Other anticipated originals include The White House Plumbers which stars Woody Harrelson, Lena Heady and Justin Theroux (sporting the kind of ‘tache that must have inspired a certain Italian plumber in the eighties). Based in part on public records and the book Integrity by Egil and Matthew Krogh, the five-part limited series tells the true story of how Richard Nixon’s own political saboteurs and Watergate masterminds, accidentally toppled the presidency they were trying to protect.

Funny Woman stars Gemma Arterton as a young woman from Blackpool trying to make her voice heard in the male dominated world of 1960’s comedy in an adaptation of Nick Horby’s Funny Girl novel, while Fear Index takes Robet Harris’s book and gives Josh Harnett the worst 24 hours of his life as a tech entrepreneur trying to make a killing on the stock market.

Further new series include a modern take on John Wyndham’s science fiction classic The Midwich Cuckoos - previously filmed as The Village of the Damned (twice) - now starring Keeley Hawes and Max Beesley as a couple in a sleepy commuter town caught up in a strange phenomenon where women of a child bearing age suddenly become pregnant after simultaneously falling unconscious.

There’re more sci-fi/fantasy tinged tales with time-loop action thrills in Extinction (working title) and The Rising which sees a recent murder victim able to use supernatural abilities to investigate her own killing and is Sky’s first series produced entirely in-house by Sky Studios. Meanwhile in The Baby, free wheeling Natasha suddenly finds herself landed with a baby that has terrifying and violent powers.

More grounded is And Then You Run which follows a close knit group of young women on the run across Europe, while We Own This City from The Wire creators George Pelecanos and David Simon stars Jon Bernthal and Josh Charles in the story of the Baltimore Police Department’s Gun Trace Task Force - and the corruption and moral collapse that befell the American city. And an international cast including Matthias Schoenaerts and Noomi Rapace team up for a high concept take on Django, the charismatic character at the centre of Sergio Corbucci classic Western of the same name starring Franco Nero.

Some of Sky’s most popular original entertainment vehicles will be popping up during 2022 too, with A League of Their Own Road Trip Dingle to Dover taking Freddie Flintoff and Jamie Redknapp off on another adventure and joined by plenty of star names along the way.

Pals Rob Beckett and Romesh Ranganathan are back for more challenges in Rob and Romesh Vs. season 4 as they take on strongman competitions, the West End, winter sports and restaurant management.

Sky Arts will be showing the second season of Dating No Filter and there are reality shows in the form of both Landscape and Portrait Artist of the Year plus Anyone Can Sing which plans to turn tone-deaf shower crooners into performers with technique and stage presence.

The factual side of programming sees a large number of documentaries hit Sky’s dedicated channel with topics ranging from: Mother Teresa, Chernobyl, the theft of Edward Munch’s The Scream during the 1994 Winter Olympics, the aborted launch of the European Super League, female boxing’s pioneers as well as exposés on the fashion and modelling worlds.

Apart from Mass, Save our Cinema and the animated The Amazing Maurice, all in January, there’s not much word on Sky’s Original Film slate and anticipated shows such as This Sceptered Isle starring Kenneth Branagh as Boris Johnson and The Tales of Dunc and Egg are notable by their absence from the list so far. Let’s hope there'll be a follow up to these announcements with even more content revealed for later in 2022.

Still, as an early peek, there’s a decent amount to digest. Why not leave a comment in the thread and let us know what you think of Sky’s announcements for 2022 so far.