The S Express is full steam ahead... 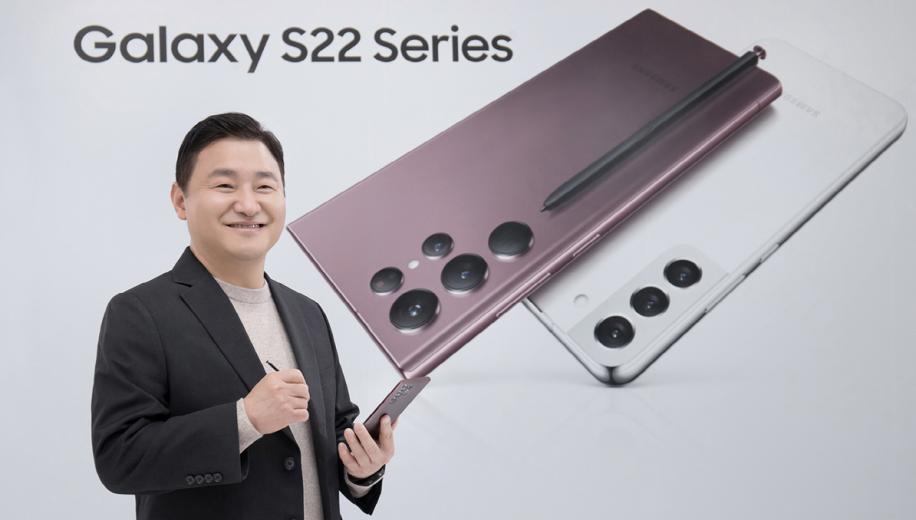 Samsung has unveiled its new Galaxy S22 range of smartphones, with three fresh models due to start shipping from the end of the month.

Along with the announcement of its new Galaxy Tab S8 series, the highpoint of this year’s first Samsung Unpacked showcase was the unveiling of its hotly-anticipated Galaxy S22 range of phones. With more than a few pre-show leaks they hardly came as a surprise, but having confirmation of the S22, S22+ and S22 Ultra models makes them no less impressive.

The S22 Ultra will no doubt take most of the headlines, further filling the hole left by the Note series since 2020 as Samsung looks to further bridge that phone/tablet divide – with a built-in S Pen included in the box. However, both the S22 and S22+ seem to carry a lot of welcome upgrades to last year’s S21 models, both in terms of the hardware and their software compatibility, even if improvements to the likes of camera quality are rather more under-the-hood.

Across the range, all three models boast Dynamic AMOLED 2X displays, with the Ultra having a 6.8-inch screen, and the S22 and S22+ at 6.1-inches and 6.6-inches respectively. All models benefit from a powerful new 4nm processor (though the specifics may vary by region) and have a larger camera sensor than before, using Adaptive Pixel technology to draw in more light and offer increased visual detail, which should compensate for the relative lack of advancements in the general megapixel count of its various cameras.

This should be further bolstered by Super HDR and other features such as Samsung’s Vision Booster technology, OIS and VDIS image stabilisation and plenty of other AI trickery are on hand to really help make your videos and photos snap. Nightography, Auto Framing (for videos) and Portrait mode options are a few examples you’ll find on all three devices – along with a wide array of compatible apps and sharing options across social media. In addition, all models will be supported by up to four generations of Android OS upgrades, to give them a decent life-span if you’re not into buying a new phone every six months.

The design doesn’t look to have changed a great deal compared to the S21, with a similarly slick ‘contour cut’ style to incorporate the cameras. The frame has been toughened up with a new Armour Aluminium material for a well-polished, if still quite familiar, look, and the screens are also getting some extra strength courtesy of Gorilla Glass Victus+.

Available from 11 March, both versions will be available in the same four colours (Phantom Black, Phantom White, Green and Pink Gold), with pricing starting at £769 for the S22 and £949 for the S22+. Those prices will get you 8GB of RAM and 128GB of storage, with the option to upgrade to 256GB for an extra £50 on each.

A first look at the Samsung Galaxy S22 Ultra

The headline act of the Unpacked showcase, the Samsung Galaxy S22 Ultra, looks to set a new benchmark for the S Series, with the built-in S Pen making quite the statement for its intended market – with Samsung claiming a 70% lower latency in the use of the stylus compared to the S21 Ultra. It boasts the same toughened frame and glass tech as its siblings, while retaining what seems to be the series’ now signature style with a nicely mirrored look adding a little extra sheen to those smooth curved edges.

As with the other models, the cameras are similar to last year, with a 108MP wide-angle camera, supported by a 12MP ultra-wide, 40MP front camera and two telephoto lenses with a 3x and 10x optical zoom – the latter can be coupled with the 10x digital zoom for the super-enhanced 100x ‘Space Zoom’ (though at an obvious deterioration in quality). As with the S22+, the Ultra is also 5G and Wi-Fi 6E compatible, and comes with a peak brightness of 1750 nits.

The Ultra model also boasts an adaptive refresh rate up to 120Hz, though it can drop down to just 1Hz for those more sedate moments to help save on battery use and any heat build-up – with new Thermal Interface Material and other heat dissipation furniture built-in to keep things cool. Speaking of the battery, the Ultra has a 5,000mAh capacity (the same as its S21 counterpart) and, as with the S22+ comes with 45W fast-charging, with the base S22 model down at 25W.

Certainly, as the series most powerful model yet, the S22 Ultra should be well-equipped to handle all of the supporting features with some ease. There’s also the added bonus for high-end users to make use of Expert RAW (a separate, but free, download) to enable them to work with RAW files and the extra benefits that can bring, along with a Pro Mode hands-on control over things like lenses, focus, ISO, white balance and more. Plus, it comes with a host of the usual online options (including access to the likes of OneDrive, Google Duo and YouTube) so sharing your content or working with others should be easy enough.

Eagle-eyed readers will have noticed that the S22 models are launching at the same prices as their S21 counterparts a year ago. All the new models are available to pre-order right now, with a pair of Galaxy Buds Pro headphones and a 12-month Disney+ subscription your incentive to sign up before the 25 Feb.