LG and Sony fill out the podium 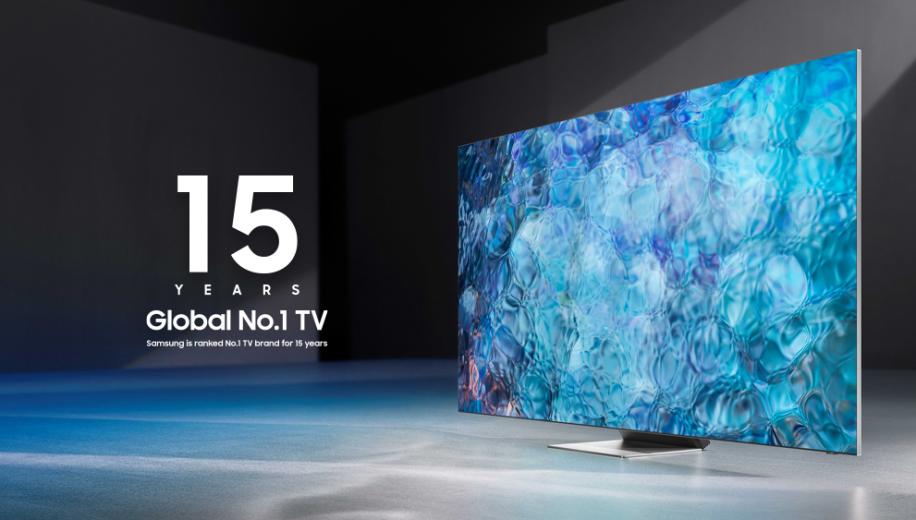 2020 might have been a hugely challenging year for many businesses but Samsung has shrugged off the difficult conditions and maintained its position as the number one global TV manufacturer for the 15th consecutive year, according to research firm Omdia.

The newly published figures quoted by industry analysts Omdia for 2020 show Samsung once again leading its rivals with a 31.9 percent global market share by sales revenue over the full year, representing growth from 2019’s 30.9 percent market share by revenue.

As far as Samsung is concerned, the last 15 years represents the success of its innovation-led commitment to the most premium at-home viewing experiences. The unbroken run at the top of the global TV tree started with 2006’s Bordeaux LCD TV before moving onto LED Edge-lit models through to smart TVs, as well as seeing the introduction of QLED technology and lifestyle TVs such as the Frame, Sero and Terrace and culminating in 8K resolution and high end micro LED technology. Now, 2021 will see the unveiling of Neo QLED models based around mini LED backlight technology.

Samsung claims its business strategy of focussing on premium QLED and large-size TVs has contributed towards its record market share. Omdia’s report notes that Samsung sold 7.79 million units of its QLED TVs last year, up from 5.32 million units in 2019, representing 35.5 percent of its total 2020 TV revenue. This, therefore, does point to the fact that, while QLED sales are increasing, the majority of its income is still from more affordable non QLED models.

Samsung also topped some of the more delineated categories including the $2,500 and above premium TV sector where the company led with a market share of 45.4 percent in terms of revenue (down from 52.4 percent in 2019) along with the 80-inch or larger screen size sector where the TV giant was dominant with an increased market share of 50.8 percent. Both these sectors return greater sales margins.

Overall, Omdia’s data shows growth in the global TV market with 225.36 million units shipped in 2020 (up from 215 million in 2019) despite the difficulties of trading in a pandemic.

Meanwhile, LG remains the world's leading OLED TV seller as it shipped 2.04 million OLED TVs in 2020, up 23.8 percent from a year ago. Omdia’s predictions put OLED shipments at 5.6 million units for 2021, still a relatively small fraction of overall TV sales.