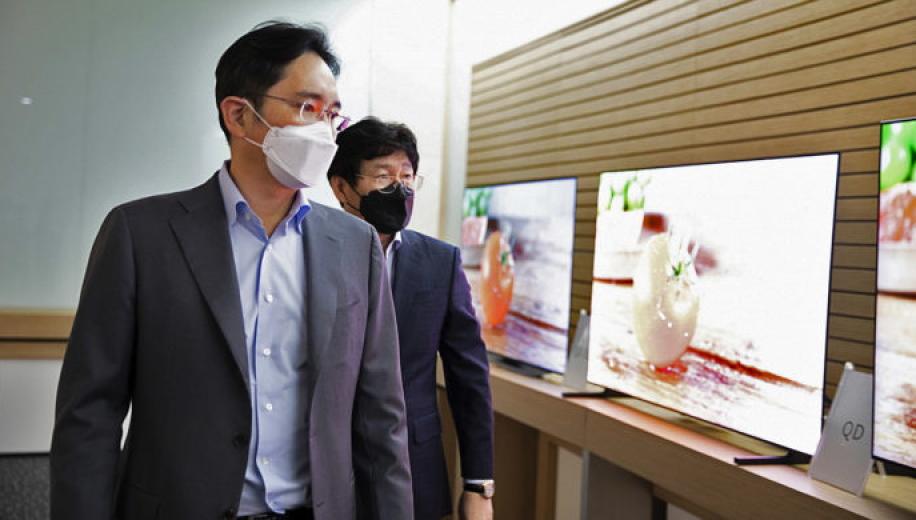 Lee Jae-yong, the Vice chairman of Samsung Electronics and heir to the Samsung Group, spent time at its display manufacturing facility in Asan, South Korea accompanied by company senior management on an inspection tour.

The morale boosting visit was reported in 4kfilme.de and has provided the first images of Samsung’s latest Quantum Dot (QD) display, a project which is hoped will raise the company to the top of the TV technology tree and in which Lee Jae-yong has a special interest after greenlighting a $10.3 billion investment package last year.

The QD TV prototype on show is different from the company’s hugely successful QLED TVs which rely on an LED backlight and use a quantum dot colour filter. The latest QD displays do not rely on a backlight since the red, green and blue sub-pixels that make up each pixel become self emissive when stimulated (energised) by exposure to light. Samsung says this will deliver a perfect black level and expanded colour reproduction.

With the TV industry currently facing challenges that range from production scaledowns due to the coronavirus, manufacturing issues facing individual companies such as LG Display and the threat of cheaper LCD panels from Chinese manufacturers when production returns to normal post Covid-19 levels, Samsung’s strategy relies heavily on its Quantum Dot developments.

The path forward for Samsung’s Quantum Dot Displays seems to have been developed in a number of differing versions including the Quantum Dot + blue OLED (QD-OLED) and the newly revealed Quantum Nano Emitting Diode (QNED) display technologies. It’s not immediately clear whether either of these technologies is involved in the prototypes but the indications are that the current pilot production phase will soon give way to mass production.

Commenting on the current state of the TV panel manufacturing sector, Lee said, “ We face unexpected obstacles, but we can't stop at anything. We will remain cautious, but will only be satisfied if we can let the cat out of the bag ... Let us get through these difficult times together and with confidence ... It is our job to lead the market with the commercialization of the next-generation QD displays to cope with the oversupply and the drop in prices for panels due to the increased competition."