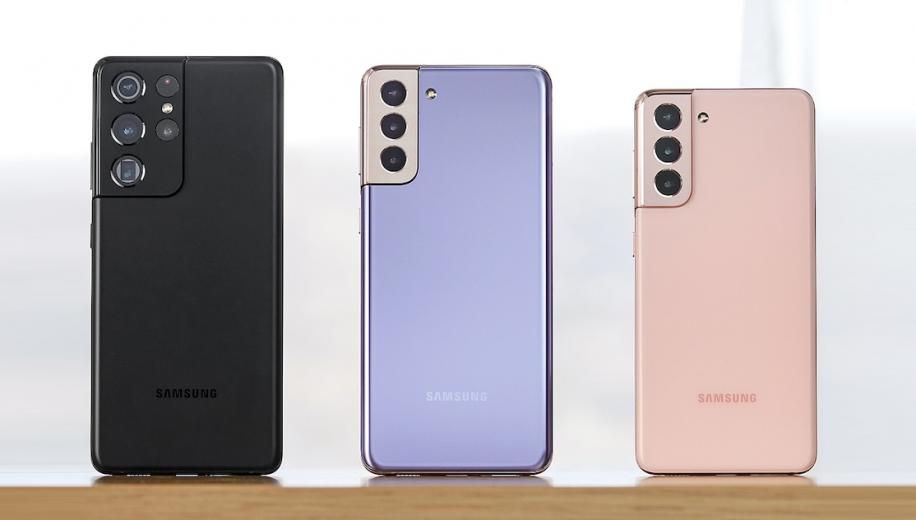 Samsung’s S21 lineup of Galaxy smart phones has been unveiled at its annual Unpacked event, topped off by the S-Pen supporting flagship S21 Ultra.

Samsung’s Unpacked launch event has taken place a little earlier than normal this year - perhaps to ride on the coattails of the media attention from the all-digital CES 2021 - and has seen the traditional launch of the company’s latest Galaxy smart phone lineup. This earlier launch of the S21 range also brings Samsung’s latest phones into more direct competition with Apple’s iPhone 12 range which was itself launched later than usual last year.

Amongst the most eye catching changes across the handsets is a new look to the rear camera assembly which has a shell that covers part of the phone’s frame - Samsung call this the Contour Cut Camera. All three models are 5G ready and also feature displays that come with an adaptive 120Hz refresh rate which means it’s only used when the content requires it, The S21 Ultra also becomes the first Galaxy phone outside of the Note handsets that is compatible with the S-Pen, though what this actually means for the future of the Note itself is uncertain.

The S-Pen itself costs an additional £35 and will need to be secured in a specially adapted S21 Ultra case since there’s nowhere on the phone itself to store the pen like there is on the Note handsets. An S-Pen Pro will be made available later on in the year which will enable air gestures and click-throughs for presentations.

Other overarching features include the octacore Exynos 2100 SoC in non US territories, Wi-Fi 6 compatibility, IP68 dust and water resistance and brighter screens. On the downside though the new phones lack any expandable microSD storage and will ship in a package that no longer includes a phone charger or basic entry level earphones, which is in line with other smart phone manufacturers.

The S21 and S21+ models share a triple rear camera set which consists of a 12MP ultra-wide, a 12MP wide and a 64MP telephoto sensor plus a 10MP front shooter. Optical image stabilisation is available on the 64MP lens.

As expected, the top flight Ultra model ups the camera ante somewhat by featuring a quad camera configuration that includes a 108MP wide angle sensor, a 12-megapixel Dual Pixel ultra-wide sensor and two 10MP telephotos - one with 3x optical zoom and one with 10x optical zoom. This twin lens telephoto system is achieved through the use of double folded lenses inside the phone and allows the Space Zoom function to achieve 1-10x optical zoom and 10-100x AI-enhanced digital zoom.

There’s a new Bright Night sensor, improved Night Mode and 12MP Nona Binning which sees 9 pixels combine into one much larger pixel in order to harvest all the light. Overall, the low light performance is a step up from last year’s S20 Ultra.

The front facing selfie camera on the S21 Ultra is an f/2.2 40MP snapper and, for the first time, 4K 60fps video is available across all the lenses.

Other AI enhanced camera functions available across all the S21 handsets include Director's View which lets you see the view from each lens and easily switch between them, Super Steady Video and Dynamic Slo-Mo. Then there’s Single Take which creates a portfolio of all the best moments you captured in one shot to make it easy to select the best one for your social media feeds.

Continuing Samsung’s heritage of using OLED screens in its Galaxy phones, the S21 has a 6.2-inch full-HD+ Dynamic AMOLED 2X Infinity-O Display with a 20:9 aspect ratio while the S21+ sports a 6.7-inch version. Both displays come with HDR10+ certification and Samsung's Eye Comfort Shield, and the adaptive 120Hz refresh rate can drop to as low as 48Hz to save on power

Meanwhile, the S21 Ultra uses an advanced 6.8-inch Edge QHD+ with an adaptive refresh rate of between 10 - 120Hz and can reach a peak brightness of up to 1,500 nits for improved HDR response.

The S21 models support Samsung's Smart Things Find plus the newly announced £29 Galaxy Smart Tag which means they can be used to find your most valuable assets.

The all-new ultrasonic fingerprint sensor is now 1.7x larger for improved accuracy and battery sizes move up through 4000mAh, 4800mAh and 5000mAh capacities in line with model’s specs.

As expected, 5G support now comes as standard and Ultra-wideband (UWB) wireless communication support in the S21+ and S21 Ultra means they could be used for interacting with other devices and equipment such as being used for security for cars or homes.

The Galaxy S21 range will be shipped on 29th Jan with preorders being taken now.