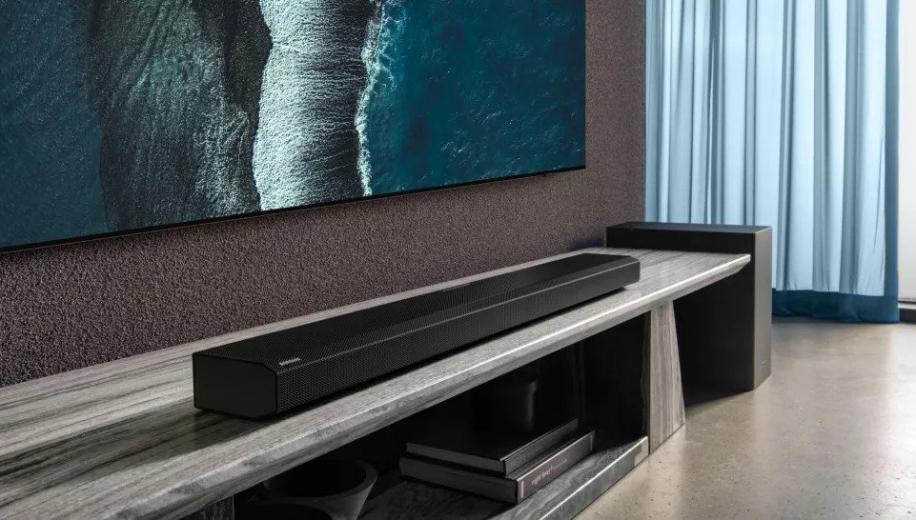 An online pre CES event from Samsung has revealed the introduction of new S- and Q-series soundbars which will selectively include AirPlay 2, room calibration and Dolby Atmos compatibility for 2021.

Heading the Q-series line up is the flagship HW-Q950A 11.1.4 channel soundbar which features Dolby Atmos and DTS:X support. The main soundbar unit itself comes with a wireless subwoofer making the main device a 7.1.2 device  but it also comes with a 4.0.2 wireless speaker package. These surround speakers feature standard forward facing drivers but also throw up- and side-firing drivers into the mix too for a totally immersive experience.

The accompanying subwoofer comes with a built in microphone which detects the acoustic traits of where it has been positioned in the room and uses Space EQ to calibrate the appropriate bass response.

A number of the new soundbars are also able to use a new feature called Q-Calibration when they have been paired with a Q-Series smart TV. This further calibrates the audio output from the soundbar to improve clarity and surround sound effects by using the TV’s built in mic to detect the acoustics of the room. The proprietary nature of Q-Calibration appears to mirror Samsung’s Q-Symphony feature which enables a Q-series soundbar to work only in unison with a Q-series TV and use the TV’s speakers to widen the sound stage. Samsung has said this feature will come to more TVs this year including the Q70A, A80A, A60A, and AU8000 lines.

As well as the 4.0.2 speaker package that comes with the HW-Q950A, Samsung has also announced a 2.0.2-channel wireless speaker set for select Q-series soundbars, including the upcoming HW-Q800A,  a 3.1.2-channel soundbar featuring Dolby Atmos and DTS:X.

Other features headed for certain new Samsung soundbars include AirPlay 2 to allow iPhone and Mac users to stream content, while the built-in Alexa will carry over from its introduction in 2020 to the higher end 2021 models.

Active Voice Amplifier will detect changes in ambient noise and boost the dialogue channel, Bass Boost delivers a 2dB kick to the low frequency effects and Samsung has stated it will increase the power of its entry level models by at least 90 watts.

There’s no word on price or territory availability at this point.