5G and foldables are major pillars of Samsung’s future focus 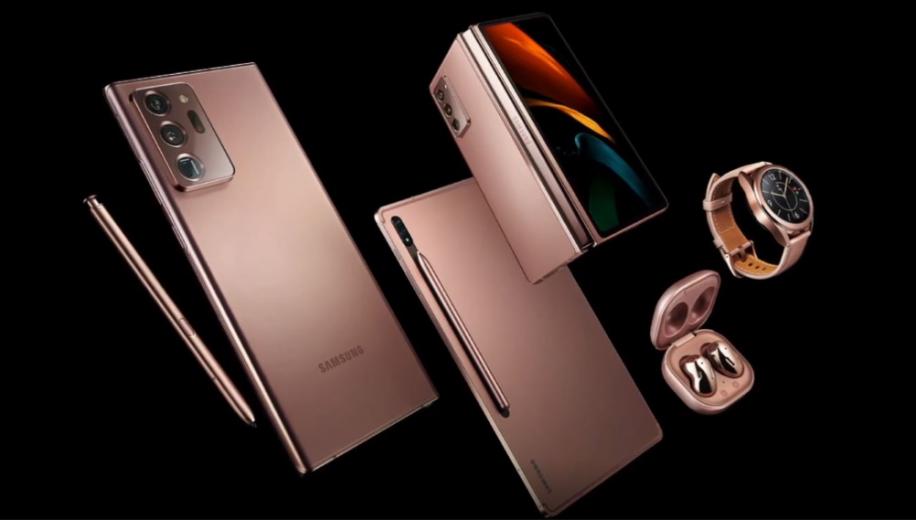 Unpacked 2020 was Samsung’s first major digital only presentation, and the company was keen to unveil its latest ecosystem of Galaxy products, which share a cohesive design and colour scheme with most of the devices on show available in at least one of the following colours, Mystic Bronze, Mystic Black, Mystic White, Mystic Silver and Mystic Green.

As Samsung’s latest flagship phones the Galaxy Note 20 and larger Note 20 Ultra were front and centre. While both share the same core features including the 10MP front facing camera, in screen fingerprint reader, an improved S-Pen and the Qualcomm Snapdragon 865+ chipset (or Exynos 990 for those territories such as the UK that usually receive Samsung’s own chipset), the Note 20 Ultra obviously gets a spec bump in certain areas.

Among other things, that means a slightly larger 6.9-inch Edge screen - the Note 20 has a 6.7-inch flat screen - and the option to operate at 120Hz refresh rate for a smoother experience, though presumably with a slightly reduced battery life. Speaking of batteries, the Note 20 Ultra gets a slightly larger juice-box (4,500mAh vs 4,300mAh) and more RAM (12GB vs 8GB) over the Note 20. The Note 20 Ultra also makes use of the latest Gorilla Glass version, called Victus, giving an overall more robust feel especially as the Note 20 reverts to a polycarbonate (read: plastic) back.

Elsewhere, the Note 20 also loses out on any expandable storage since there’s no microSD card slot, so you’re capped at 128GB and it also lacks Samsung's new UWB (ultra wide band) connection protocol. UWB will be used in upcoming new features including ‘Nearby Share’ and ‘Smart Things Find’ which helps locate other Galaxy phones, watches and even earbuds. UWB technology can measure range and direction and makes connecting with other UWB equipped devices quicker and easier. Samsung is planning on using the technology as a digital key so you can use your Note 20 Ultra to unlock your home or car.

Moving onto the feature that makes Samsung Galaxy Note a … well Note, the S-Pen has undergone some improvements. Probably the most important one is the reduction in latency. This is the time it takes for the movement of the S-Pen to be picked up by the handset, processed by the software and finally drawn on the screen and it has now been reduced to 9ms. This has been achieved both by the use of the 120Hz screen (in the case of the Note 20 Ultra) so the data from the S-Pen is presented twice as frequently, plus the use of AI-based Point Prediction which means the system has analysed tens of millions of writing samples so it can use that information to more effectively predict where the S-Pen is going next.

In addition, the Samsung Notes app has been updated so, among other things, there’s live auto syncing with the cloud so that notes are always ready to be seen or edited on other devices. This is especially useful as the continued partnership between Samsung and Microsoft will let you run Galaxy Note 20 apps on your Win10 PC and the Notes app will soon be able to sync with Microsoft OneNote.

Handwriting recognition has been improved and one further useful Notes feature is the ability for the handset to record voice notes and sync with the text that has been written. The voice note will then playback when the trigger word or phrase is activated by the S-Pen so you can listen to what was said if you suspect your written notes are not completely accurate. Off screen gestures with the stylus will help navigate through your notes too.

Preorders for the Galaxy Note 20 and Note 20 Ultra will be taken from 6th Aug with availability from 21st August.

Samsung’s third foldable phone is the Galaxy Z Fold 2 which comes on the back of the original Galaxy Fold and last year’s smaller clamshell style flipper, the Z Flip - somehow Samsung has decided to conflate the earlier phone’s nomenclatures into something that seems to cover all bases of folding and flipping.

The Galaxy Z Fold 2 addresses the complaints that the exterior 4.6-inch screen on the original Fold was too fiddly to use. This has been addressed with a larger 6.2-inch screen with a punch hole cut out for the selfie camera which means the Z Fold 2 resembles a Galaxy S20 when it is in the closed position.

When open, the internal screen is 7.6-inches and there’s another Infinity ‘O’ display camera available. Samsung has alluded to a 120Hz refresh rate but didn’t elaborate whether it was the inside or outside screen - or both.

Addressing the durability issues faced by the first Fold, Samsung has gone back to the drawing board and come up with newly designed UTG folding glass -  which is much smoother to use and more durable than plastic -  as well as coming up with a re-engineered hinge which allows the display to be held open at a multitude of angles (much like the Z Flip). There are over 60 moving pieces in the hinge and these need space to move around each other correctly. These spaces attract dust and crumbs from the outside world so an improved and longer lasting sweeping mechanism has been introduced to keep the internal hinge gaps cleaned out.

There were very few technical specs given away and a separate online event concentrating more on the device was promised for 1st September when preorders can also be taken.

The Z Fold 2 comes in Mystic Bronze and Mystic Black but no price or availability was revealed.

An obvious AirPods rival, the distinctive kidney bean shaped Galaxy Buds Live are Samsung’s first True Wireless noise cancelling earbuds. With the addition  of wingtips, the earbuds can stay snuggly in the ear with all day comfort and don’t protrude like other TWSs. The battery lasts for up to 6 hours plus there’s another 21 hours available from the charging case.

Both the buds weigh a mere 5.6g and feature 12mm drivers tuned by AKG. Each has 3 microphones (1 inside and two outside) to reduce external noise by up to 97 percent, plus there’s a voice pick up mic for clear voice calling.

Connection is via Bluetooth 5.0 and they support AAC and SBC codecs. A touch panel provides control and a simple tap allows access to your playlists.

The Galaxy Buds Live are available from Aug 6th for £179

The Galaxy Watch 3 comes in 41mm and 45mm sizes and features a precision rotating bezel for choosing functionality.

With an eye on the ultimate personalisation experience, there are over 80,000 different faces available for the Watch 3. But health and fitness is really at the core of what the Watch 3 is about and functions for measuring blood pressure, taking electrocardiograms (ECG) and determining blood / oxygen saturation levels are in the process of being cleared by local regulators.

Galaxy Watch 3 will be available from 6th Aug.

Also launched was the new lightweight Galaxy Tab S7 which comes in two sizes, the 11 inch LCD Tab S7 and the 12.4-inch super AMOLED Tab S7+ and both support 120Hz refresh rates. Designed to be used with the S-Pen, a separate keyboard/case is also available for increased functionality and protection.

Multitasking has been improved and up to three apps can now run simultaneously. The Tab S7 can now be used as a second screen for your PC and each one comes with ad-free access to YouTube Premium too.

Preorders for the Galaxy Tab S7 and Tab S7+ will be taken from 6th August with availability from 21st August.

What do you think of Samsung's announcements this year? Let us know in the comments section.