Neo is the one 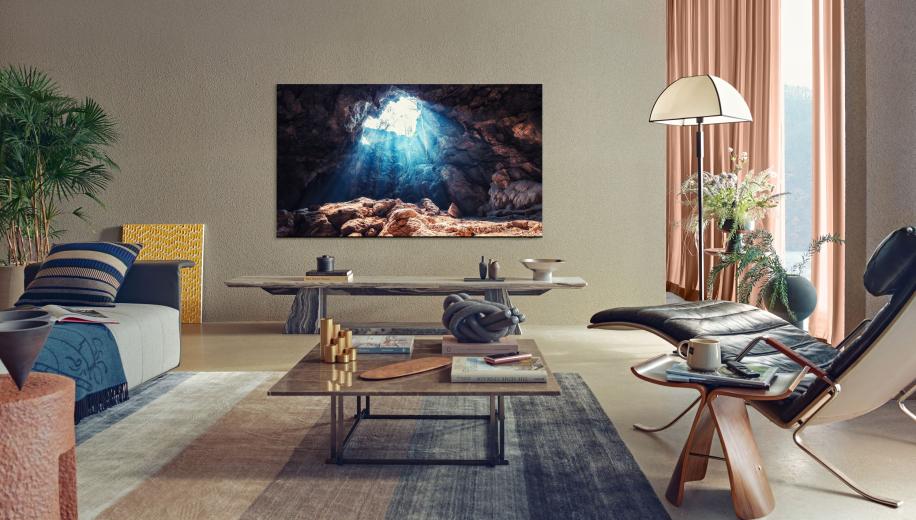 Samsung has just held its traditional pre-CES First Look event, albeit virtually this year due to the pandemic. I had a chance to go though the company's latest TV tech innovations with their engineers before Christmas, and now that the embargo has been lifted I can share the main points. However Samsung won't be announcing model numbers, prices or availability until later in Q1.

Unsurprisingly, Micro LED will be getting plenty of attention this year. First announced at CES 2020, but delayed for fairly obvious reasons, these TVs will finally arrive in stores during the first quarter of 2021. This revolutionary display technology promises pixel-level control like an OLED, but much brighter images with peak highlights up to 2,000 nits and no risk of burn-in.

These new Micro LED TVs are possible thanks to mass production of smaller chipsets, allowing for panels to be pre-assembled in standard sizes. There will be a bezel-less design, a pure metal plate around the outer edge, and 80W of amplification built-in. A special wall mount is included in the box, while a dedicated stand will be sold separately. There's no confirmation on screen sizes or pricing, but as far as the latter goes you can assume these new Micro LED TVs won't be cheap!

Naturally Samsung is still heavily promoting 8K resolution, but the company's flagship 8K and 4K TVs will be enhanced by the introduction of Neo QLED. This latest innovation not only includes quantum dot technology for wider gamuts and increased colour volume, but also a newly designed LED light source.

Conventional LEDs use a lens to guide the light and packaging to protect the LED itself. Samsung's new Quantum Mini LED units eliminate the lens and packaging, using a micro layer to accurately control the light and make sure it doesn’t leak or cause blooming. As a result, the Quantum Mini LED unit is a 40th of the size of a traditional LED, allowing Samsung to use considerably more in a backlight. This smaller Quantum Mini LED unit also allows Samsung to build significantly thinner QLED TVs, with almost zero distance between the backlight and LCD panel, with smaller parts and power circuitry further reducing the depth of the panel.

The increased number of Neo QLED units and dimmable zones will result in improved backlight control with deeper blacks, brighter highlights and significantly less blooming or other artefacts. In addition, Quantum Matrix Technology will ensure active control of all the LEDs, while an upgraded processor will allow for more precise dimming, better localised power distribution, deeper blacks and increased shadow detail.

The 8K TVs will also benefit from an upgraded Neo Quantum Processor that now uses Multi-Intelligence Deep Learning. The previous AI processor used one neural network, but the latest version uses up to 16 neural networks with multi-intelligence to create a neural analyser that’s specialised for video. The neural analyser chooses the best neural network based on the analysis of the scene for optimal upscaling.

Other features include Ultra Viewing Angle technology for improved off-axis viewing, and Anti-Reflection technology to minimise distracting reflections. There's also Adaptive Picture technology that optimises the image for a particular scene, and also for the room using a light sensor. As previously announced, Samsung will also be adding HDR10+ Adaptive this year.

On the cosmetic side of things, the new TVs will not only boast slimmer panels but the flagship 8K model will use a bezel-less Infinity One Design. There's the new Solar Cell solar-powered remote control that can be recharged by indoor or outdoor light, so you'll never need to change the batteries again (there's also a USB port if you need to give it a charge boost). Even the One Connect Box has had a make-over, and is now slimmer. The Slim One Connect Box can be attached to the rear of the TV's stand for tidier cable management, or used separately when wall mounted.

The audio has also been upgraded and there are now four different versions of Object Tracking Sound (OTS), depending on the model. At the lower end will be OTS Lite, which creates immersive audio by using software simulation. Then there's OTS which uses a 2.2.2 speaker layout with two at the top, two at the bottom and two subs. OTS+ adds two more speakers halfway up the panel for a 4.2.2 channel layout, while the flagship OTS Pro adds two more centre speakers for a 6.2.2-channel layout.

The SpaceFit Sound feature will detect a TV’s surroundings, including the distance from the TV to the surrounding walls and their acoustic properties, thus allowing it to optimise the audio. The Active Voice Amplifier (AVA) will also detect ambient noise and adjust vocal clarity accordingly, while the Q Symphony feature allows Samsung's TVs to work in unison with its soundbars.

Samsung will also introduce TV Plus Home, with its dedicated button on the remote, allowing you to collate all your content into a single hub. There will also be a mobile app so you can access content on the move or in another room.

Speaking of remote access, in these difficult times it will now be easier to work from home using your Samsung TV. If you install the necessary app on your PC, any TVs within the same Samsung account will be scanned and automatically connected. There will be support for Remote PC, Samsung Dex, Office365 and Microsoft Teams to make it even easier to work from home. You can also use Multiview and Google Duo for video conferencing.