A lap of luxury? 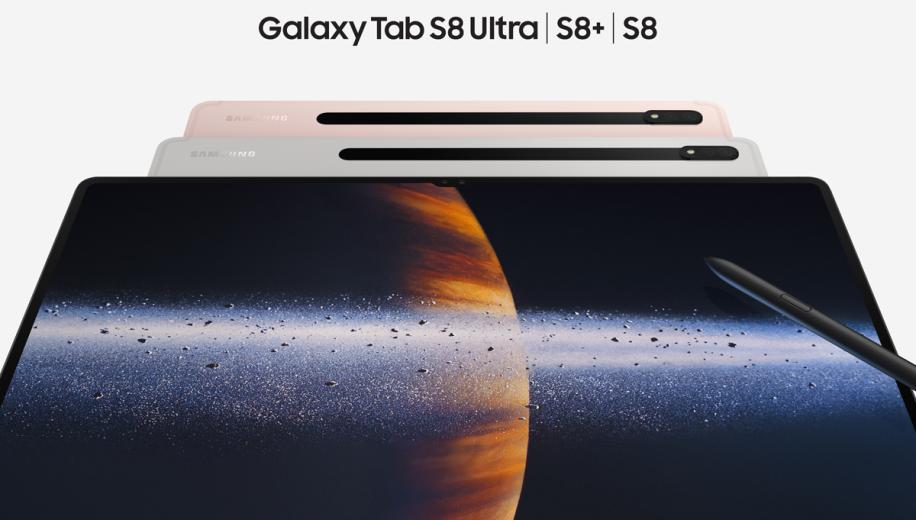 Samsung has unveiled its new range of Galaxy Tab S8 tablets, with the S8, S8+ and S8 Ultra set to launch at the end of the month.

As part of the same Unpacked event that saw the S22 range of smartphones announced, Samsung has also added three new tablets to its roster with the Galaxy Tab S8 Series. Much like its mobile siblings these come in the standard, ‘plus’ and Ultra variants, with pricing starting at £799 for the S8, £999 for the S8+ and £1,149 for the Ultra model. Similarly, while the three also share some common hardware and software options, there are some notable key differences.

At their core, there are plenty of reasons for the likes of creatives, gamers or those working from home to like what they see across the board. There’s support for Samsung’s DeX and One UI Tab 4 interface, with a customisable multi-window system that’s made even easier with the use of the S Pen (now readily available in the box). Further compatibility with the likes of Samsung Notes, Google Duo, Video Calling and more (including a new partnership with Clip Studio Paint), should make it easier than ever to work, play and share with others – and across all other Galaxy devices.

Of course, the S8 Ultra was always going to be the pick of the bunch. It boasts a 14.6-inch Super AMOLED display, with the S8+ offering similar tech in a smaller 12.4-inch screen. Unsurprisingly, the Tab S8 is the smallest of the bunch, with a 11-inch LTPS TFT display. All three models share an adaptive refresh rate of up to 120Hz, as well as supporting 5G and having W-Fi 6E connectivity for the first time, along with Wi-Fi Direct Bluetooth v5.2.

You can find 3-way microphones in place across the series, with quad stereo speakers supporting Dolby Atmos to support your audio options. One area where the Ultra may warrant the extra money is with its second front-facing camera – a 12MP wide lens that comes in addition to the standard 12MP ultra-wide option, with all models featuring a 13MP AF and 6MP ultra-wide camera at the rear. You can record at up to 4K with access to the likes of Selfie Videos, while the S8 series also offers up access to the LumaVision editing system for the first time.

With a 4nm processor in place for the first time, the series promises to be the fastest to date and possibly the sturdiest, too. Much like the S22 phones, these new tablets are also made using an Armour Aluminium body which we're assured is 30% more scratch resistant and 40% less prone to bending. We’ll let you do the testing on those figures! Much easier to judge will be its thinnest and lightest frame (5.5mm and 726g for the Ultra) in what is a typically slick design.

Wrapping up the specs, the S8 comes with a 8,000mAh battery, compared to 10,090mAh for the S8+ and 11,200mAh for the Ultra – which Samsung claims equates to a day’s usage. If it doesn't, then the 45W fast-charging across all models should help, with a 100% charge said to be ready after just 80 minutes (with its USB-C port making it a handy way to add charge to your phone on the go if needed).

The whole Samsung Galaxy Tab S8 range is available for pre-order now, with products set for arrival on 25 February. Anyone getting their order placed in the meantime will get a free keyboard and a 12-month Disney+ subscription thrown in. And, as with the S22 phones, all tablets come with the promise of support for up to four generations of Android updates, so they shouldn’t become redundant any time soon.