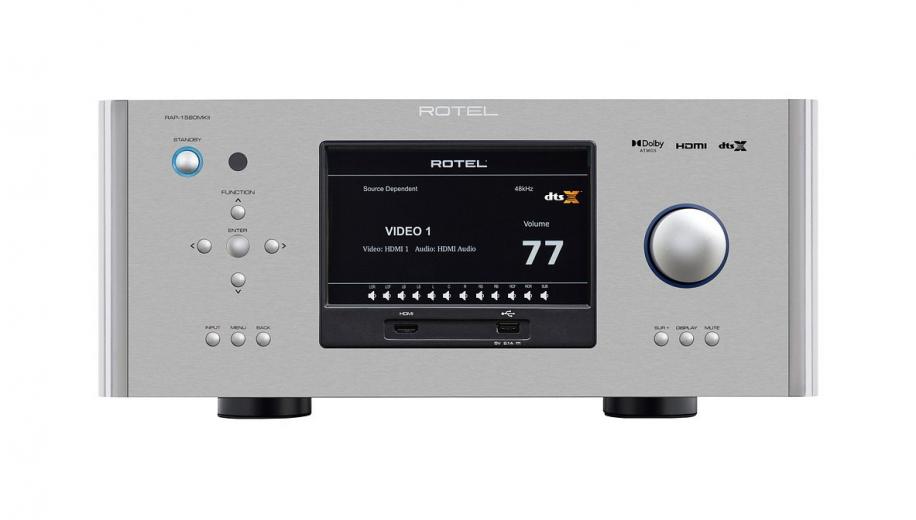 Drawing on Rotel’s six decades of audio design experience, the RSP-1576MKII Surround Sound is a surround processor that supports up to 7.1.4 channels for Dolby Atmos and DTS:X audio formats, while the RAP-1580MKII is an amplified Surround Processor that includes seven channels of Class AB amplification. Both devices use the latest Texas Instruments quad-core DSP and an array of six Wolfson 24bit /192kHz audiophile grade DACs using critically tuned sonic components to ensure the audio performance meets the highest acoustic standards.

The RSP-1576MKII comes with Dirac Live Full which uses the included measurement microphone to enable automatic frequency and time domain adjustments across the 20Hz – 20kHz range, ensuring optimal performance in any size theatre. Meanwhile, the RAP-1580MKII also includes support for Dirac, however the license is for Dirac Live LE room correction which allows adjustments in the most difficult frequency region from 20Hz to 500Hz.

The RSP-1576MKII’s architecture is designed as a multi-channel preamplifier and as with all Rotel products, the audio engineering utilises Rotel’s proprietary Balanced Design Concept. This is built on an in-house manufactured toroidal transformer, plus there's a low distortion – noise rejection circuit layout and acoustic tuning of all critical audio circuits.

A number of Rotel’s Class AB power amplifiers would prove to be ideal partners for the RSP-1576MKII ranging from the RMB-1585 (5 x 200W, 8 ohms) to the RMB-1504 (4 x 70W, 8 ohms) for installations of any size.  Once installed, setup functions are easily visible on the HDMI OSD and also on the front VFD display when the unit is housed in an equipment rack in a remote location.

The seven channel RAP-1580MKII on the other hand already includes its own amplification which utilises an oversized Rotel factory built toroidal transformer and high efficiency slit foil capacitors. Power delivery is 100 Watts per channel into 8 ohm loads with all channels driven and 200 Watts of power into 4 ohm loads with two channels driven.

The 1580 adds a further HDMI input, taking the total to eight, with three of these supporting 4K HDR pass-through and, like the 1576, both HDMI outputs support 4K HDR. The source inputs include optical, coaxial, analog, XLR, iPod USB, PC-USB (24/192), aptX Bluetooth for high quality wireless streaming and a Moving Magnet Phono Stage for those who have large vinyl collections.

Like the RSP-1576MKII, the front panel display is easily readable from a distance to aid configuration and both processors support control system integration with RS232 and IP Ethernet controls, three assignable independent 12V trigger outputs plus wired IR input and output.

The RSP-1576MKII and RAP-1580MKII will be available in both Silver and Black finishes in September and October 2020 respectively.

Suggested retail pricing for the new models is as follows: