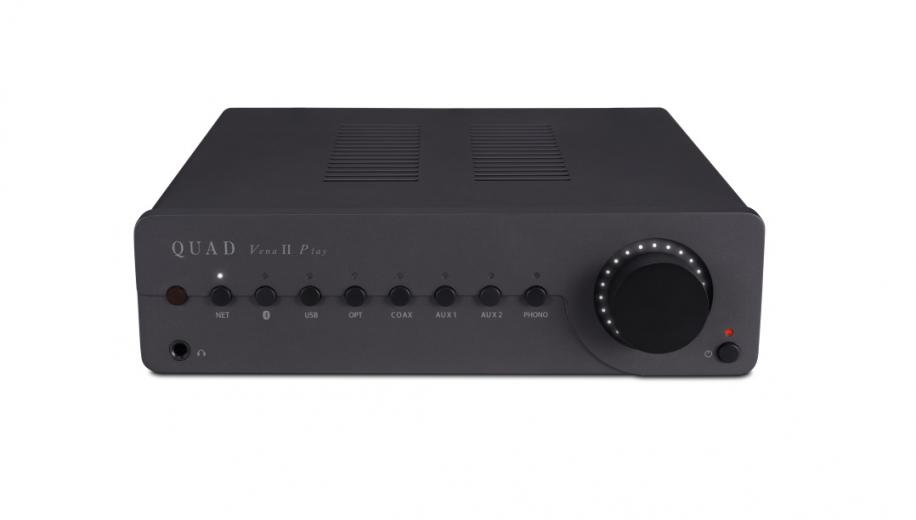 Quad introduces the Vena II Play, an updated version of the 12 month old Vena II stereo amp which gets a makeover that adds Hi-Res Wi-Fi streaming by incorporating the DTS Play-Fi platform.

One of the venerable audio brand’s most popular current products, the addition of Play-Fi brings a new range of connection possibilities such as Bluetooth and network access via Wi-Fi to the Vena II. The resulting Vena II Play now covers all bases from traditional Hi-Fi sources to wireless streaming and it thus becomes Quad’s first product to embrace Wi-Fi streaming.

The overall front appearance of the new Play version of the Vena II remains largely unchanged except for the addition of the word ‘Play, a ‘NET’ button and an array of white LEDs around the rotary control to indicate volume level and reflecting the use of a stepped resistor under microprocessor control, which differs from the motorised ALPS volume pot in the Vena II - a change which delivers enhanced accuracy and integration with the Play-Fi app.

Developed by DTS, Play-Fi is an app-based streaming platform that enables high-quality, whole-home wireless audio and is capable of streaming Hi-Res music up to 24-bit/192kHz. One of the great advantages of the system is that it is brand independent and, as long as a product is compatible with Play-Fi, then devices from a wide range of established audio brands can be used in the same multi-room setup, using up to 32 Play-Fi enabled devices.
Play-Fi also provides access to a host of internet music services including Spotify, TIDAL, HDtracks, Deezer, Qobuz, Amazon Music, Napster, TuneIn, iHeartRadio and SiriusXM, among thousands of other music and podcast channels - favourites can be assigned to presets within the app.

Streaming content from a DLNA-compatible NAS drive or media server is also an option and a wide variety of file formats are supported, including MP3, MP4A, AAC, FLAC, WAV and AIFF. In standard mode, which is optimised for multi-room bandwidth, audio is streamed at up to 16-bit/48kHz CD quality and by engaging Play-Fi’s Critical Listening Mode, Hi-Res audio up to 24-bit/192kHz may be streamed to the Vena II Play over Wi-Fi or Ethernet cable, without transcoding or down-sampling.

Control over the Vena II Play is available via the Play-Fi app, which is available for iOS, Android and Kindle Fire smartphones and tablets, as well as Apple and Android smartwatches and Windows PCs. In addition, the amplifier Works With Alexa (via an Amazon Echo smart speaker or similar) to allow voice control and Spotify Connect allows users to stream directly from Spotify’s servers using the Spotify app.
Elsewhere, the heart of the Vena II Play remains unchanged from its predecessor and is centred around an ES9018K2M DAC chip from the Sabre32 Reference family, which applies the benefits of ESS Technology’s 32-bit HyperStream architecture and Time Domain Jitter Eliminator to deliver ultra-low noise and high dynamic range. The post-DAC active filter has been chosen specially for its synergy with the ES9018K2M which helps retain a sense of musicality from the circuitry.

The class AB power amp section has a power output of 2x45W into 8 Ohms and despite these modest figures, Quad is confident that the amp will drive any speaker it is likely to be partnered with to high volume levels. The sensitive preamp section is protected from interference and along with a short signal path and independent low-noise power supplies for all critical stages, the amp delivers high dynamic range.

There’s a phono stage for MM cartridges with a high-quality, low-noise, JFET-based circuit with precise RIAA equalisation and a range of headphone types are catered for thanks to a dedicated amp stage with current-feedback circuitry.
The rear panel reveals some key changes from the Vena II, with the new Play iteration sporting changes to the digital inputs. An Ethernet port if the most obvious addition to enable hardwired network connectivity but this has reduced the number of S/PDIF inputs from three to two, leaving one optical and one coaxial input. The Vena II’s optical/coaxial digital outputs are absent here, too, while the main Type B USB port can receive and process Hi-Res PCM audio up to 32-bit/384kHz, as well as DSD up to 11.2MHz (DSD256)

The Vena II Play gains two extra aerials for connecting to its dual Wi-Fi receiver, while the third is used for Bluetooth activity which features support for the aptX and AAC codecs as well as the basic SBC format, enabling streaming from any smart device.

Analogue RCA cable connections are the same as the Vena II, with two line-level inputs and the MM phono input, plus pre-out sockets to allow the addition of an external power amp.

Finished in Quad’s classic Lancaster Grey, the Vena II Play is on sale from November at an RRP of £799.
The Vena II remains available at £649 for listeners who do not require streaming capabilities.


Does the Quad Vena II Play hit the right balance of price, flexibility and features for AVForums readers? Let us know what you think in the discussion thread.