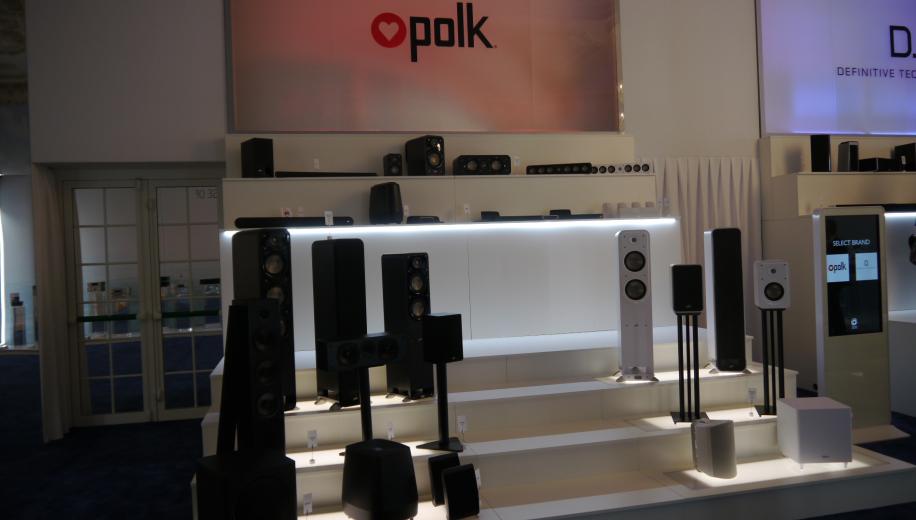 Polk is an American speaker brand that was formed in 1972 and is now the number one loudspeaker in terms of market share in the US.
In fact if you like statistics, Polk speakers and soundbars are in 10% of all US homes and the company sells 1.3 million speakers globally each year. The brand is the most trusted name in surround sound in the US with key patents in surround technology, sonic dimensionalisation, bass enhancement and vocal intelligibility. Polk offer complete speaker packages from entry-level price points up to high-end systems and they also make soundbars. However the challenge for Polk, who along with Denon, Marantz and Definitive Technology form part of Sound United, will be to develop speakers and soundbars that appeal to the European market. We’ve already had a taste of what Polk is capable of in the form of the Magnifi Mini soundbar which we reviewed recently. The Mini retails for £339, includes a wireless subwoofer and delivers a sound that is much bigger than its dimensions would suggest. However if you have a big screen TV and are looking for a soundbar to match, then Polk’s Magnifi Max will arrive in August with two options. You can either buy the basic soundbar and wireless subwoofer package for £499 or the SR package which includes two wireless surrounds for a suggested price of £649. The Magnifi Max uses five full range drivers and two tweeters combined with a powerful 8” subwoofer. Polk prefer to invest in quality drivers than other aspects to ensure an excellent mid-range and better high frequency response. The soundbar has 3 HDMI inputs and 1 output, with all of them supporting 4K HDR and the output also supporting ARC (Audio Return Channel). There’s also an optical digital input and a 3.5mm analogue input, along with streaming via Google Home and Bluetooth. The Magnifi Max includes Dolby Digital and DTS decoding along with Polk SDA Surround technology and Polk’s Voice Adjust technology that is designed to make dialogue clearer and easier to understand. If you’re interested in buying a soundbar but your budget is a bit tight then Polk’s new Signa S1 could be the answer at just £199. This soundbar and wireless subwoofer combination is already available and offers a great set of features for what is a highly competitive market. The Signa S1 uses two full range drivers and two tweeters, and a powerful 5.25” wireless subwoofer. There are optical digital and 3.5mm analogue inputs, along with Bluetooth and Dolby Audio (5.1) decoding. The soundbar includes Polk’s Voice Adjust technology and it comes with a deluxe remote control. We had a demo of the Signa S1 in action with the trailer for Kong: Skull Island and it delivered an audio performance far in excess of its size or price point, with a wide and detailed soundstage supported by plenty of bass. The Signa S1 also managed that rare trick of sounding good with music as well as movies, something that we also noted when reviewing the Magnifi Mini. Whilst launching a range of soundbars makes sense, especially in the European market, what Polk are famous for are full size speakers and their new Signature Series has been designed with Europe in mind. This new range is already available in black but a white option will be available in July. This is important because whilst almost all speakers sold in the US are black, 80% of the speakers sold in Nordic countries are white. The Signature Series speakers combine a quality crafted cabinet design with modern American styling and dual-floor compatible feet. There are three floor-standing models, all of which include Polk’s patented Power Port technology, along with a 1” Terylene Hi-Res dome tweeter capable of output to 40kHz and 5.25” or 6.25” Polypropylene mid-woofers. There are also four-layer voice coils and cascading cross-overs, along with support for high resolution 24-bit/96kHz audio sampling rates.