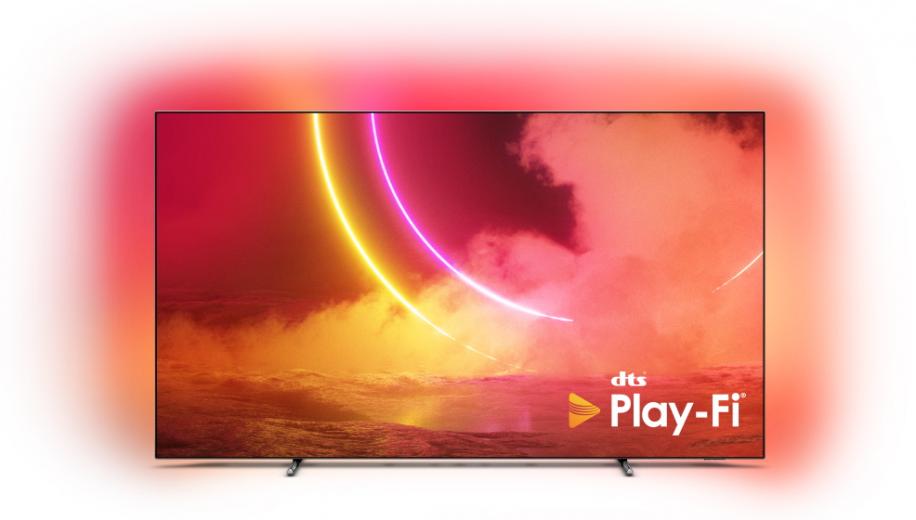 TP Vision has announced plans to introduce the DTS Play-Fi wireless audio protocol to its most recent Android TVs and upcoming soundbars and wireless audio speakers.

The just announced Philips OLED805 series of TVs will be the first models from a premium TV brand to host the premium wireless audio ecosystem and Philips will make DTS Play-Fi available on all of its planned 2020 Android based TVs including the OLED855 and 865 models and 9435, 9235, 9005 and Performance Series 8505 LED/LCD TVs.

The good news is that as part of TP Vision’s efforts to build a complete wireless connectivity platform using DTS Play-Fi, the second half of 2020 will see an over-the-air update bring the feature to the company’s 2019 Android powered TVs too. This will include its OLED 804/854 models as well as the 9104, 8804, 7504 and 7304 LCD TVs, which are based around the Android TV Pie (9) OS.

DTS Play-Fi is a Hi-Res (24bit/192kHz) wireless audio platform that supports sub-millisecond playback accuracy and enables music and TV audio throughout the entire home via compatible products. The advantage of the Play-Fi ecosystem is that it is not bound to a single brand or hardware type and the scope of its whole-home entertainment experience benefits from its seamless interoperability between hardware from a wide range of manufacturers, including Arcam, Klipsch, Quad, Polk Audio, Anthem, Pioneer, Wharfedale and now of course Philips. Currently, DTS Play-Fi is supported by over 200 speakers, set-top boxes, soundbars and AV Receivers so it’s easy for AV fans to mix and match their hardware.

Indeed, Philips will be further adding to the list of supported hardware with the release of compatible soundbars and wireless speakers in September this year (sounds like a possible IFA announcement to us!) to offer the option of building a connected streaming audio system based on Philips’s latest products. Or you could choose to throw in other brands too, that’s the beauty of DTS Play-Fi.

Is the addition of DTS Play-Fi a significant enough feature to make a Philips Android TV a possible next TV for you? Let us know what you think of this news in the discussion thread.