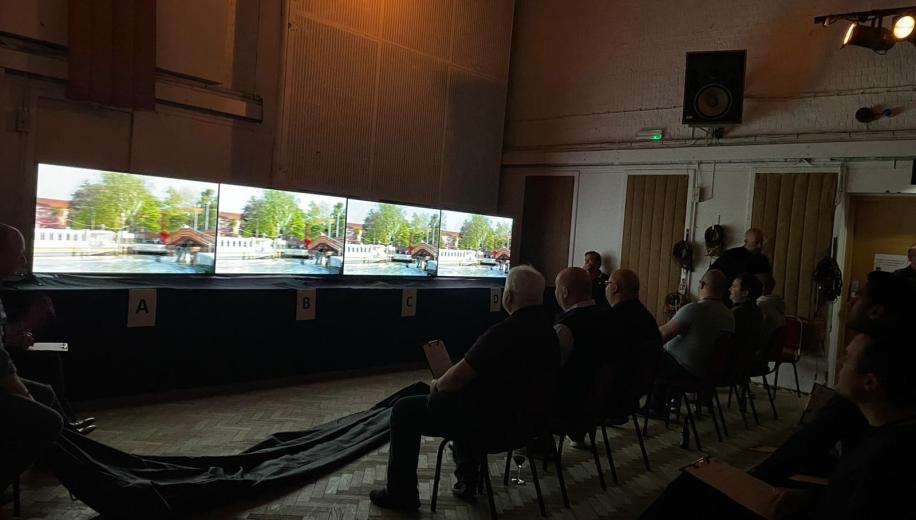 Since its first shootout event in 2017, Philips has continued to put forward its OLED TVs as the best for picture quality over the years. And on the 16th of November 2021 at the world-famous Abbey Road Studios in London, AVForums' members were once again invited to decide which of the four OLED screens on display was the best.

Of course, a manufacturer event will always draw cynical comments from the readers that it’s a fix and that it will be set up so the right screen wins on the night. But, Philips does things differently and actually puts its neck on the line by conducting the testing, not only blind, but after calibration by independent onlookers.

The testing is set up with all four 65-inch OLED panels made to stand at the same height to each other in a line. They are then covered from bezel to stand so that anyone looking at them has no idea which screen is which. There are no manufacturer badges on display and between clip changes, a black out sheet is held up in front of all the screens, so the audience of AVForums' members, has no idea which screen is which.

Added to this, for the first section of the evening, the testing is also done in SDR calibrated modes. The screens were calibrated and checked by Steve Withers and then further checked by me to make sure that all four screens looked as identical as possible; which is the whole point of calibration.

For HDR10 playback, all the screens were in their most accurate out of the box presets, with all image manipulation and processing switched off. For three of the screens this was the Filmmaker Mode which follows D65 white and ST.2084 PQ EOTF, with DCI-P3 colour, and on the Sony it was set to Custom, which is their claimed out of the box preset for HDR10 accuracy to ST.2084 PQ EOTF, DCI-P3 colour and D65 White.

The first two sections were observed to be fair by Steve and I and we were satisfied that all settings were correct on all the sets and that the audience of AVForums' members couldn’t see which set was which, therefore removing any brand bias either intentional or subconscious.

And this was no shootout for just any member of the public, no, only verified AVForums' members were given the opportunity to attend, people who know their way around an OLED TV and take an interest in picture quality and the best TVs on the market. So, once again, Philips was taking a big risk putting its 65-inch OLED+936 up against the Sony A90J, Panasonic JZ2000 and LG G1 models, all of which feature a variation of LG Display’s EVO type panel with heatsink. All four TVs are superb quality and I personally would be happy owning any of them after reviewing and testing all of the sets this year, they are all top quality and that would make things very difficult for the members attending and voting.

It was also the first opportunity for any normal member of the forums to see these exact models set up in a blind test and calibrated for image accuracy. So, which screen won out on the day and was crowned king of the OLED’s?

AVForums' members were given the opportunity to apply for the limited 30 spaces for the evening and none were paid or given any incentives by Philips. In fact, Philips was looking for long standing and knowledgeable members who know their TVs and who would give their honest opinions on the evenings events and findings. Hopefully, they will also comment in detail on the thread attached to this report.

The day started early with all the set up, testing, calibration and then approval from Steve and I that we were satisfied with the settings to be used for the first two sections of the evening. The third section of the night was Philips' opportunity to test the four screens in their vivid settings, to show off the company's P5 AI+ processing and the claim it does vivid better than anyone else. This section was not overseen by Steve or I and was entirely handled by Philips.

The host for the evening was forum favourite Danny Tack, who is Philips' Senior Director Product Strategy and Planning and its picture quality guru. Danny is a well known member of the AV world and takes his role within Philips very seriously, listening to the market and responding with products that meet what enthusiasts and the general public want from their TV's picture quality.

And the venue was also pretty special. The Shootouts have taken place in a number of very nice locations, including the James Bond vehicle exhibition near Covent Garden and the BAFTA HQ to name two in recent years, so to have the event at the world famous Abbey Road Studios was superb and a real added bonus for those AVForums' members attending.

So, those attending had no idea what the screens were given their position on the display stand as everything was done to make sure the process was blind and nothing gave away the screens being used. Attendees were also allowed to move around the room so there was no issue with colour shift from any of the OLED panels off to the sides.

One area in which AVForums and the attendees had no input was with the viewing material being used for the demonstrations. These were picked by Philips for timing reasons and of course, it would also be best suited to the TVs being tested. It was a mixture of SDR and HDR content as well as demo scenes specially filmed for TV demo purposes.

While it was a manufacturer held event, the calibrated, Filmmaker Mode and Vivid sections were conducted fairly and professionally, with many attendees stating how difficult it was to see differences in the calibrated section as the sets were so close to each other.

So the winner was no preference, which is what we would expect given how good all the TVs are and that the purpose of calibration is to match screens to a given standard.

Moving to the Vivid section of the evening the same clips were played again and repeated like the calibrated section so people could move around the room to change viewing distance and angles.

The results for the Vivid Mode section were -

Finally, we have the combined results for both sections of the evening which were -

And that wrapped up the evening's shootout before the attendees moved to another part of the studio for a few further demos with the Bowers & Wilkins speaker-bar equipped OLED+986 and a mini-LED TV vs. OLED comparison.

And to end the evening Philips also gave away a 65-inch OLED+936 by drawing a name out of the hat from all the attendees on the evening and the lucky winner was forum member Richard (a3rmk), congratulations!

We have a full in-depth video coming very soon with interviews, explanations and the thoughts of the attending forum members, so stay tuned for that to land this weekend.