Gamers get in on the action 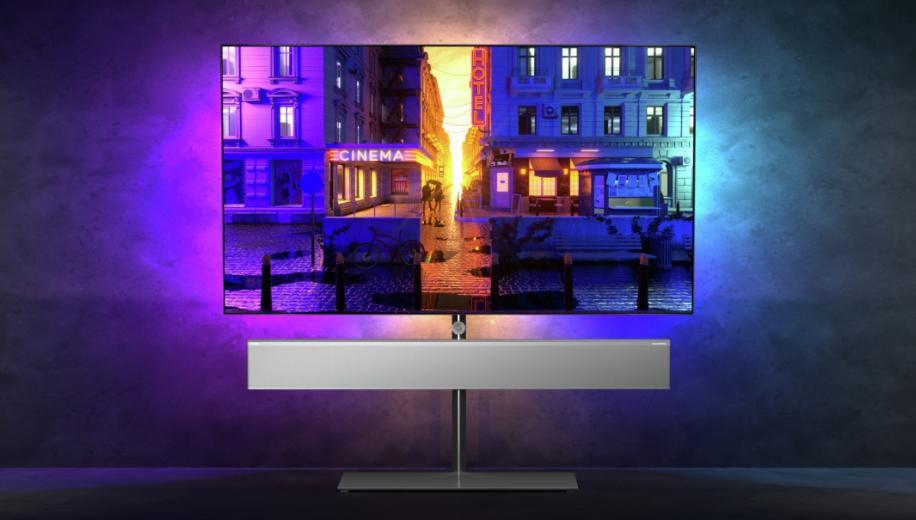 Philips has revealed its newest flagship TVs for 2021, the OLED+936 and OLED+986, which both feature a dual P5 processor, HDMI 2.1 support, HDR10+ Adaptive and updated Bowers & Wilkins sound systems.

Philips has used its first ever live online event to announce new additions to its premium 4K OLED TV range for 2021, with the introduction of the OLED+936 and OLED+986 models, both taking a step up from last year’s last year’s OLED+935 by introducing HDMI 2.1 features and low latency for gamers and adding a new dual P5 picture processor for improved images.

The OLED+936 comes in three sizes, 48-, 55- and 65-inches, while the the OLED+986 will be available in a single ‘Statement’ 65-inch size and, with the exception of the 48-inch 936, all the models feature the latest, high-performance OLED Evo panels which deliver a 20% increase in peak brightness.

The introduction of a new Film Detection Mode to the existing AI categories means that the TVs will automatically bring up Filmmaker Mode, which provides a viewing experience without any P5 picture processing, or Home Cinema Mode which adds in adaptations to the picture quality.

Other modes include Ambient Intelligence which uses the TV’s light sensor to ensure that contrast, for both SDR or HDR content, is always optimised to the local ambient light levels. Moreover,  in addition to HLG, HDR10, Dolby Vision and HDR10+ compatibility, both the OLED+986 and OLED+936 now support HDR10+ Adaptive which combines HDR10+ dynamic metadata with the ambient light information to automatically optimise brightness levels to the viewing environment on a scene-by-scene basis.

The introduction of HDMI 2.1 to two of the four HDMI connectors is a boon to gaming fans and brings 4K/120fps, VRR (Variable Refresh Rate) plus Freesync Premium and G-Sync support along with eARC on port 2. A low latency (a reported 8ms) gaming mode is activated when a compatible next generation gaming source is connected. Gamers will also benefit from the Fast Motion Clarity feature which runs at 100Hz rather than the more usual 50Hz.

Both new series feature Bower & Wilkins speaker systems that bear the signature Tweeter on Top arrangement. All the speaker enclosures have been re-engineered, while an improved Dolby Multistream Decoder and HDMI eARC makes for more efficient transfer of audio content.

The main difference between the new TVs is that the OLED+986 deploys an audiophile grade 70W 3.0 sound system which features three 100mm mid/bass drivers that use the Continuum cones first developed for Bowers & Wilkins’ signature 800 Series speakers, while the OLED+936 features a Dolby Atmos compatible 3.1.2 system with upgraded drivers across the board.

Four sided Ambilight is also on board both new releases and creates immersive lighting effects which include a variety of modes to enhance music, gaming and movie experiences. There’s integration with Philips’ Hue range of products too.

Other features include support for DTS-HD audio plus DTS Play-Fi support for multi room capabilities with other Play-Fi enabled devices, There’s also voice control in the form of Google Assistant and Works with Alexa. Smart TV facilities and services such as Chromecast are delivered via Android 10 but there’s no mention of AirPlay 2 or DTS:X support at this stage.

The premium finish to the OLED+936 and OLED+986 TV packages includes Kvadrat fabric on the B&W speakers plus a Muirhead leather backed remote control with a metal finish and illuminated buttons.

The Philips’ autumn TV release schedule is usually timed to coincide with the annual IFA exhibition and gives TV fans something to look forward to later in the year. The rest of the company's TV range was announced back in late January and includes the 806, 856 and 706 OLED series. AVForums currently has a 48-inch 806 model in for review which will be coming very soon.

The OLED+936 will be available from September, while the OLED+986 is due in October. Prices have yet to be confirmed.