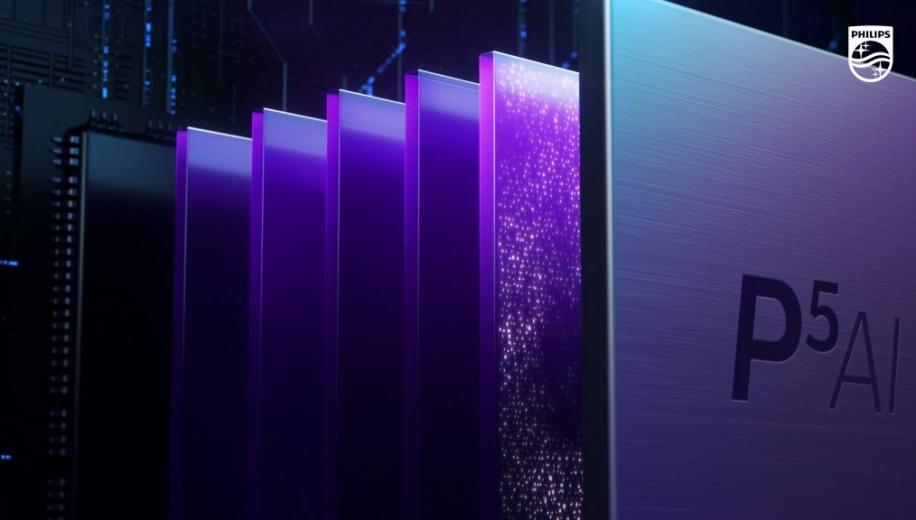 The continuing development of Philips’ P5 image processing engine saw a layer of AI added for the 4th Gen revision last year and now further improvements have given rise to the 5th Gen P5 AI.

Image quality will be improved as a number of measures are introduced into the newly enhanced 5th generation P5 AI processing suite including; Film detection, ‘intelligently’ integrated light sensor operation, HDR10+ Adaptive, a version of the anti burn technology for OLED screens, Calman Ready calibration functionality along with HDMI 2.1 capabilities.

With the resulting understanding, the AI can create a better blend of the five pillars of PQ (source, colour, contrast, motion and sharpness) as it analyses content, frame by frame, reproducing a much more realistic, natural image.

Now with the addition of Film detection as a sixth category alongside Landscape/nature, Face/skin tone, Motion/sports, Dark/contrast and Other, the 5th Gen P5 automatically ‘flags’ movies and offers the viewer the option to switch modes – including to a new Home Cinema Mode, Pure Cinema Mode or Filmmaker Mode.

For the first time, the operation of the TV’s light sensor has been added to the AI functionality. This adjusts the presentation of both SDR and HDR content and delivers the optimum contrast for the ambient light level in all viewing environments.

Moreover, in line with the company’s policy of supporting all current HDR formats, including HLG, HDR10, HDR10+ and Dolby Vision, the latest generation P5 also offers support for HDR10+ Adaptive which combines HDR10+ dynamic metadata with real-time ambient light information to automatically optimise brightness levels on a scene-by-scene basis in response to the viewing environment.

When viewing fast moving images such as sports, or when playing games, viewers can select the new Fast Motion Clarity (FMC) feature which provides a smooth transition from image to image with increased sharpness but without introducing artefacts and which also avoids wide-area, field-flicker by running at 100Hz rather than the more usual 50Hz.

Owners of Philips’ new OLED806/856 TVs will find a version of the company’s unique anti-burn-in system included as part of the 5th Gen P5 AI functionality. This monitors a grid of zones to accurately detect static content such as logos and gradually reduces the intensity of its local light output to avoid burn-in without compromising the output of other parts of the screen.

With 2021 Philips OLED and mini-LED sets now utilising the full HDMI 2.1 48Gbps bandwidth, the 5th Gen P5 AI plays its part in ensuring the smooth operation of the protocol’s associated feature set including VRR for 4K content from 40Hz to 120Hz along with Freesync Premium Pro and Auto Game mode.

And to think the only control viewers used to have was just three rotary knobs on the front of the TV - Contrast , Brightness, Colour - how we’ve come on.