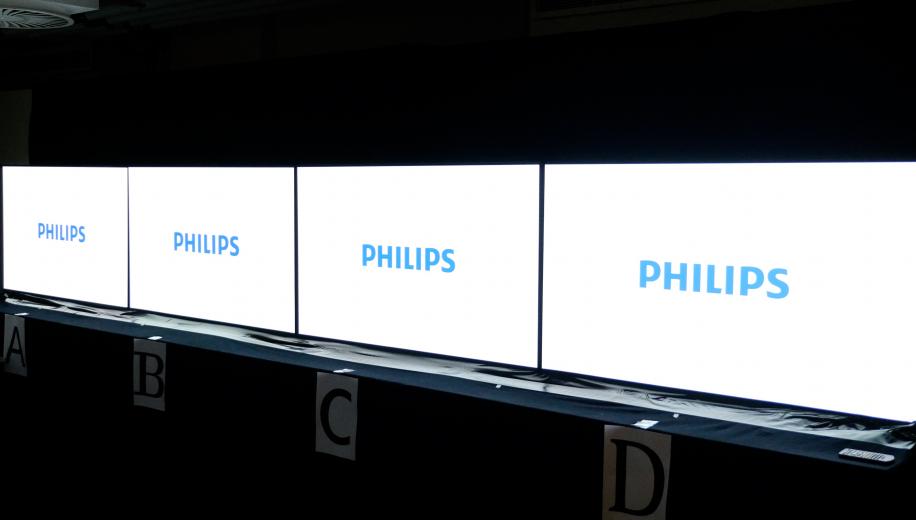 In a 'blind' shootout held by Philips in conjunction with AVForums members, their 9002 OLED TV came out top in terms of both calibrated and vivid picture modes.
The shootout itself was held at the London Film Museum and, although it was organised by Philips, AVForums were on hand to ensure that the event was completely fair and unbiased. To that end, the four TVs used for the shootout were set up in such a way that it was impossible to tell which TV was which – a so-called 'blind' test. The TVs were all 55-inch models, set to exactly the same height, and the bezels, stands and rears were hidden from view, thus making it impossible to distinguish one from the other – aside from picture quality of course. The TVs were purely identified as Set A, Set B, Set C and Set D. To make sure that no on-screen menus or displays gave away which TV was which, a black curtain was raised at certain times when sources were being changed.

This is important because unlike other shootouts, where the brands are clearly visible and thus possibly subject to personal bias, this test was completely 'blind' and thus eliminated any potential brand bias. This hopefully made the event more interesting compared to other shootouts because the ultimate scoring was based purely on the images shown to the attendees rather than any sub-conscious brand bias. In order to make the shootout as fair as possible, AVForums calibrated the ISF/Cinema modes of all four sets to the industry standards of Rec.709 and D65, we also set them to the same peak brightness and turned off any processing or frame interpolation. This meant that all four TVs were theoretically exactly the same with the same LG Display OLED panels and the same calibrated images, although of course there will be minor differences, especially in terms of colour tracking. This first part of the shoot-out was intended to set a base level of performance between the four TVs.

For the second part of the test the four TVs were set into their Vivid or Dynamic modes, which means all the processing features are at their maximum settings. The idea was to show how effective these processing features are and of course since Philips had organised the event they clearly felt confident that their processing was the best. However AVForums members are highly knowledgeable picture quality enthusiasts who can be very hard to please, especially as we always advocate using a calibrated mode for watching movies so that the director's intention is retained. Would the 28 AVForums members in attendance be swayed by the benefits of picture processing? Would they feel that some processing can be applied to certain content or would they just rather use a calibrated mode?


AVForums also vetted the content that would be used for the shoot-out to ensure that it covered a wide variety of material in both standard and high dynamic range. The content was chosen to test the TVs in terms of colour accuracy, sharpness, noise reduction, motion and contrast performance. The first three pieces of content were provided by Philips themselves played from a media server – a still image, a specially commissioned short film with a lot of horizontal and vertical pans and some baseball footage of a ball being thrown – all of which were Full HD and SDR. The second three pieces of content were from Netflix via an Xbox One S, a clip of Friends in Full HD, a clip of The Black List in 4K Ultra HD and a clip of Breaking Bad in 4K Ultra HD – again all three were in SDR. The final section involved HDR10 material played from a Panasonic UB900 Ultra HD Blu-ray player, with a clip from the film Passengers on 4K Ultra HD Blu-ray, an HDR test clip that was actually created by LG and a clip from the 4K Ultra HD Blu-ray of Planet Earth II. In addition a scene from the Blu-ray of The Revenant was showing when the attendees first arrived, although this wasn't part of the scoring. Since there are currently no agreed industry standards when it comes to HDR calibration, the decision was made not to show calibrated HDR images as part of the actual test. However the three HDR clips were shown again on the four TVs in their optimal HDR modes at the end of the event, for the purposes of completeness.

The results of the shoot-out were fascinating, especially the first section where all four OLED TVs were in their calibrated picture modes. We expected there to be no clear winner, since all four images looked almost identical, although no four consumer televisions are ever going to look exactly the same even when calibrated, and in fact a 'No Preference' option was added to the scoring sheet for this reason. However in the shootout the AVForums members actually scored as follows:

For the Philips TV to be such a clear winner was a genuine surprise but what also surprised was how poorly the Panasonic EZ952 scored, especially as it has the most accurate picture in terms of colour. The Panasonic has scored much higher in other shootouts but given that they weren't conducted under 'blind' conditions that may have influenced the results. As to why AVForums members chose the Philips 9002 over the other brands, the exact reasons were difficult to pin down, with many just preferring the overall look of the picture, some preferring the colours and others the contrast performance. Some members did suggest that screen B and C may have benefited from being the two in the centre, although that would only apply to those sat in the centre and doesn't explain why Set C had 33% but Set B only had 8%. When you consider the range of prices these results were even more interesting with the Sony KD-55A1 currently retailing for £2,799, the Panasonic TX-55EZ952 costing £1,999, the Philips 55POS9002 also setting you back £1,999 and the LG 55C7 the cheapest at £1,699.

In the second part, where all four TVs were in their Vivid/Dynamic picture modes the scoring was as follows:

Whilst we weren't surprised that Philips performed well in the second part of the shootout, a score of 68% was huge and clearly justified Philips's faith in their own processing. Interestingly the Panasonic performed much better in this section which, when you consider that image accuracy is their strong point, was rather surprising. The poor showing of the Sony A1 and LG C7 was also a surprise, with both TVs really struggling in some of the motion tests, whilst the C7 ironically performed poorly on the manufacturer's own HDR test clip. As to why the Philips scored so highly, well they clearly place a great deal of emphasis on their picture processing and look to apply it without over-saturating colours, blowing out highlights or using excessive sharpening. We would still always recommend using a calibrated picture mode for watching movies and TV dramas but there is plenty of scope for applying more image processing to TV programmes and sports broadcasts. Certainly it appeared that many AVForums members in attendance agreed and quite a few were surprised at how far Vivid modes have come in the last few years.

At the end of the shootout one lucky AVForums member got to take a Philips 55POS9002 4K OLED TV home with them, so our congratulations to Daniel Hendon. We will have a full video of the evening with interviews and comments available in a few days.

Were you at the event, do you wish you'd gone or are you just interested in the results? If so why not add your thoughts to the discussion thread?

In addition you can find out more about Philips's P5 Picture Processing in this dedicated thread.