“It’s not my favourite mode” 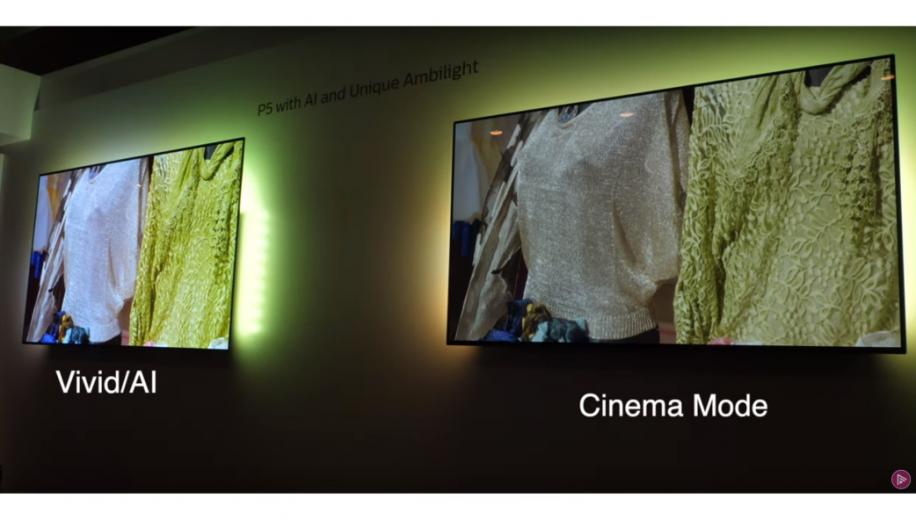 Never one to rest on its laurels, Philips has introduced the 4th generation of its award-winning P5 Picture Perfect image processor to its latest range of OLED TVs, with this version adding AI and promising to give the most realistic image yet.

AVForums was invited to the Philips main launch event in Amsterdam where we got to spend some time with the man behind the P5 image processing engine, Philips’s Director of Product Strategy and Planning, Danny Tack.

Danny explained how the new iteration of the processor analyses image information and applies its processing in line with Philips’s Five Pillars of Picture Quality - Source, Sharpness, Colour, Contrast and Motion.

Taking last year’s 3rd Generation P5 processor, which was the AVForum’s Editor’s Choice Award winner for Best TV Picture Processing 2019, and introducing a layer of AI gives rise to this year’s 4th Gen version.
The AI that has been added is based upon a neural network which Danny’s team started training a year ago by having it analyse millions of images and teaching it to identify and differentiate the images into five categories. The different image types were grouped using the following classifications; Nature/Landscape; Faces/Skintones; Sports/Motion; Dark/Contrast and Other (to include images types such as animation). Philips used a database of 30 years worth of images that the neural network could draw from.

With the AI now on board the P5 processor, once the AI software has categorised the content images, it then makes decisions about how best to apply processing, subject to Philips’s Five Pillars, such that the balance between them gives the most realistic version of the image.

With the ability to constantly analyse the content frame by frame, the AI makes ongoing adjustments based on its learned parameters, which results in a more life-life image, according to Philips.

This P5 processing mode has undergone a change in name from Vivid to Vivid/AI based on feedback from AVForums members and Danny explained that this post-image-categorisation processing is designed as a refinement stage to create a realistic image. “It’s not now our ambition to make Vivid even more vivid with more sharpness or more colour, but more real.”
When asked about how the sharpening process worked, Danny said that there were many options that could be used during sharpening but that the approach involved using small changes in many areas rather than a few larger ones. In this way, the balance between all the sharpening parameters never gets stretched to the point where it looks artificial. He stressed that the same approach was taken with contrast and colour, “Sharpness, colour and contrast, we do in a very balanced way. We try to keep them even and in perfect harmony with each other”

The 4th Generation P5 Picture Perfect image processor will appear on all three upcoming OLED models from Philips, the 805, the 855 and the 865 and on both the 55- and 65-inch screen sizes that all three models will come in.

Given the focus Philips puts on its P5 processor, it was interesting that it was included in the CES announcement as a supporting partner of the new Filmmaker Mode, which is a picture setting that the UHD Alliance has introduced to enable content to be viewed in the way that the creator intended. This involves switching off the image processing so that the content is seen without any accompanying motion smoothing, colour adjustment or sharpening. Since Tack is a firm believer that the kind of processing that the P5 does can actually enhance the image, AVForums wondered what his thoughts on the setting were. His response to Filmmaker Mode is not surprising.

“Well it’s not my favourite mode," he conceded.

However, he was sanguine about it saying, ”I don’t see a contradiction to what we are doing today. Today in our smart picture modes we have Movie Mode, and Filmmaker Mode is very similar to Movie Mode.”

Tack admits that the P5 processing may be adding nuances to the image that the director did not intend but he says changes happen elsewhere too, for example, sharpening is added when a Full HD movie is upscaled to 4K and that’s not something that can be avoided.

The bottom line with Filmmaker Mode is that the consumer has a choice and therefore the final say in how they want to watch the content. All Tack says, is to give the P5 processing a go, since you may actually like it.

Are you the owner of a recent Philips TV with a P5 processor? How do you feel about images it delivers? And what do you think about Philips supporting Filmmaker Mode? Why not drop us a comment in the discussion thread and let others know your thoughts?