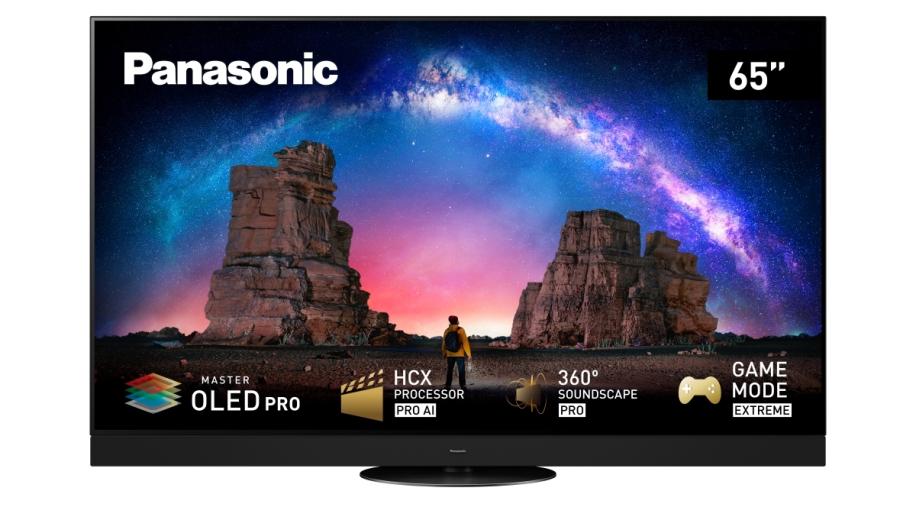 Panasonic has announced its 2022 line-up of OLED and Core LED TVs, including two models boasting its Master OLED Pro panels and one getting the full 360-degree Dolby Atmos treatment.

Announced along with a host of LED displays, the five new 4K OLED models, billed as being “the perfect choice for movie lovers”, are the LZ800, LZ980, LZ1000, LZ1500 and the LZ2000, with the latter two promising better picture quality and higher contrasts courtesy of their Master OLED Pro panels (except for the 42 and 48-inch versions of the LZ1500) – with a few improvements that we knew about after the LZ2000 was announced at CES in January.

Screen sizes start at 42 inches for the LZ800, LZ980 and LZ1500 TVs, going up to 77 inches for the first time with the LZ2000, and all models available at 55- and 65-inch variants. It's worth nothing that the LZ800 is looking like a UK-specific model so anyone based further afield might want to check for other regional variations.

Panasonic is promising plenty of improvements to its 2022 OLED range, including a higher peak brightness in its True Cinema, Cinema, Filmmaker and Professional Modes, along with improved colour volume in its blues while maintaining high-precision gradations through its updated HCX Pro AI processor. This is backed up by an improved Auto AI mode, which Panasonic introduced last year, which can identify the type of content that you’re watching and adjust both the picture and audio accordingly.

The new models also come with optimised picture quality, using improved sensors for ambient colours and brightness to automatically adjust each colour tone individually for an enhanced and more authentic viewing experience – with a ‘cinema quality’ colour performance tuned by film colourist Stefan Sonnenfeld. While this may be most noticeable for night-time viewing, Panasonic also points out how people tend to see whites differently based on their surrounding ambient lighting, with the HCX Pro AI processor preserving the colours that we’re more familiar with, such as skin tones, in a warm and natural way. The OLED displays will also come with Dolby Vision IQ and Netflix Adaptive Calibrated Mode support for further automatic picture processing based on your lighting conditions, to deliver images true to the source material.

On the audio front, the LZ2000 comes with a full 360-degree Dolby Atmos experience built-in, using a Front Array speaker system. This includes up-, front- and side-firing speaker units, coupled with Beam Forming technology to create an immersive spatial soundstage. The LZ1500, LZ1000 and LZ980 come with Dolby Atmos courtesy of their Cinema Surround Pro set-ups, with the 55- and 65-inch LZ1500 models coming with an advanced ‘Dynamic’ variant that utilises a built-in woofer for added bass, while the LZ800 comes with the base Cinema Surround tech.

There’s plenty to keep gamers happy, with Panasonic’s own Game Mode Extreme providing these HDMI 2.1-friendly TVs with high frame rates, low latency, and a new Game Control Board feature that lets you set and access a range of features on the fly, including key info, the HDR Tonemap and a Dark Visibility Enhancer.

The TVs come with VRR support up to 120Hz at 4K with a VRR ON option to automatically synchronise the pacing in line with the action and counter issues with screen-tearing for a smoother gameplay experience. The 60Hz Refresh Mode also improves on latency and input lag, and all of the OLED models come with FreeSync Premium support to help iron out some of the other visual kinks.

The package is wrapped up with a tidy interface, using the latest iteration of Panasonic’s Smart TV set-up with My Home Screen 7.0 providing support for all of the usual streaming suspects. We’re assured of improved accessibility for this year’s models, with a quick menu and voice control, along with audio descriptions, dialogue enhancement and new subtitle configurations.

As for those two Core LED TVs, they come with many of the same features as the OLEDs – most notably the game-friendly ones, with the LX940 also coming with a 120Hz panel and FreeSync Premium support, as well as running the HCX Processor Pro AI chip along with HDR Cinema Display Pro. The LX800 has to make do with the standard HCX Processor and a combination of HDR Cinema Display (55 to 75-inch models) and Bright Panel Plus (43 and 50-inch) for automatically adjusting the brightness based on your ambient lighting. It also comes with the base Surround Sound audio package compared to its sibling's Cinema Surround system.

There’ll no doubt be a lot more to follow in the weeks ahead in terms of pricing, availability and maybe a few more bells and whistles worth shouting about, plus the rest of Panasonic's LED roster to add to the list, so stay tuned for more! In the meantime, feel free to let us know how you see Panasonic’s latest shaping up for the year ahead, in the face of typically tough competition from the likes of Sony, Samsung and LG's offerings. Where’s the smart money going in 2022?