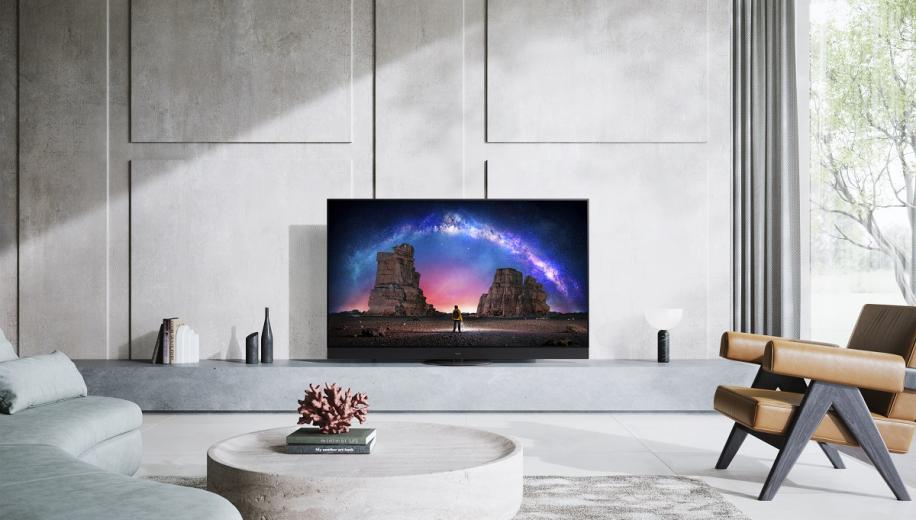 Panasonic held a closed-door online briefing on Wednesday the 6th of January to introduce their latest flagship OLED TV, the JZ2000.

Panasonic has been on a roll with the Custom Professional OLED Panel flagship over the last two years, with the GZ and HZ2000 models taking top honours in our review awards, so expectations are high for the JZ2000 to add more features for 2021. The company has been well known for its stunning picture quality for watching movies at home, but this year they want to build on that and introduce more features for a wider consumer base. The JZ2000 will be available in 55- and 65-inch screen sizes.

For 2021, the Hollywood to the Home marketing strapline disappears and is replaced with ‘See it all, feel it all.’

So what about the JZ2000 and its features? Sadly with Covid restrictions, I wasn’t able to see the new TV in prototype form, as we would in normal years at CES, so the online presentation could only give us the bare facts without any demos. As you would imagine, the chassis design is very similar to the outgoing models with the Custom Professional OLED panel not receiving any major upgrades for the new model. When asked, Panasonic stated that they had more or less reached the possible peak performance for the current OLED panels in terms of picture quality and peak brightness performance. However, there are some upgrades to the picture processor with a new HCX Pro AI chip being introduced.

Panasonic states that the HCX Pro AI is designed for those users who don’t want to tweak settings for content, so it helps to deliver an optimum experience for users by accurately detecting what kind of content is being viewed, whether that be a movie, sports, music, news, etc.

Identifying this content in real-time, analysing the picture every second and comparing it to a varied library of content that it has learned, Panasonic claims the processor is able to automatically adjust both picture and sound quality to suit. If it detects that you are watching football, for example, it adjusts the picture to make the grass more life-like, the players more three-dimensional, whilst also automatically adjusting the sound to make it feel like you are right there inside the stadium. On the other hand, if it detects that you are watching a film, it dials in the most accurate colours and – based on the knowhow Panasonic has learned though its long-term Hollywood collaborations – adjusts the picture quality to give a more cinematic experience. We will of course put these claims to the test when we get a JZ2000 for review.

Panasonic is also keen to open up their OLED TVs to the ever-growing gaming market and with the new HCX Pro AI chip, they have improved the input lag latency and also added HDMI 2.1 features to the TV. However, they were unable at the time of this briefing to confirm if the ports will be full 48Gbps HDMI 2.1 ports and how many there will be on the JZ2000. More information on that should be available in March.

There is also a new Game Mode Extreme picture preset that is composed of the following elements:

Many users will be happy to see Panasonic open up the capabilities of their Flagship OLED for gaming use.

The JZ2000 also expands its all-in-one capabilities by adding new speakers to the previous Dolby Atmos soundbar and upward-firing speakers. This year, those speakers are tuned once again by Technics with the addition of new side-firing speakers and a mono subwoofer. The total audio package will be known as 360° Soundscape Pro and it is capable of delivering a Dolby Atmos experience with the speakers onboard. There are no rear placed speakers so the soundstage will remain front heavy on the JZ2000, but audio quality should be the same high standard we witnessed with the recent HZ2000. Many forum members have voiced a strong opinion that they would be interested in buying a Custom Professional OLED panel TV without the built-in speakers, but it would appear, once again, that such a model is not being launched or considered by the company. The JZ2000 also has a new circular stand which allows it to swivel.

Moving back to the picture quality and with the Custom Professional OLED panel, the JZ2000 is touted by Panasonic as being the only TV in 2021 to have as high a peak brightness with HDR, as well as the company's renowned just above black performance, as was seen with the HZ2000. There is support for Dolby Vision, Dolby Vision IQ, HLG (Hybrid Log-Gamma), HDR10+ and HDR10+ Adaptive High Dynamic Range formats, as well as Filmmaker Mode with Intelligent sensing.

Panasonic also retains its collaboration with Stefan Sonnenfeld, founder and CEO of Company 3 and colour grader on films and TV shows such as A Star is Born, Wonder Woman, Man of Steel, Beauty and the Beast, Star Wars: The Force Awakens, Jurassic World, 300, and lots more. Sonnenfeld has once again assisted in the development and fine-tuning of the accurate picture quality modes available on the JZ2000.

Finally, the My Home smart TV system is now onto version 6.0 with some new user interfaces including new menu designs that make it easier to find the most commonly used picture, sound, and other settings. The JZ2000 also supports major voice services built-in, allowing users to operate some key TV functions using just their voice, plus, there are now two Bluetooth connections available so more than one device can be used simultaneously. Last but not least, there is also a new My Scenery feature which will display images or videos to turn the TV into a useful picture frame or similar.

Overall, the new changes introduced to the Flagship OLED model certainly will open it up to a wider range of consumers and not just those looking for the ultimate dark room OLED for movie watching. It should now offer more from a gaming standpoint as well as sports and smart TV uses. But Panasonic is also keen to stress that the JZ2000 will continue to offer the exceptionally accurate image quality that AVForums look for in a flagship model and I am certainly looking forward to reviewing a sample as soon as one is available. We should get more detailed technical information in March as this event was just an early briefing on the new model.

Panasonic will also be announcing more TV models later in the year.