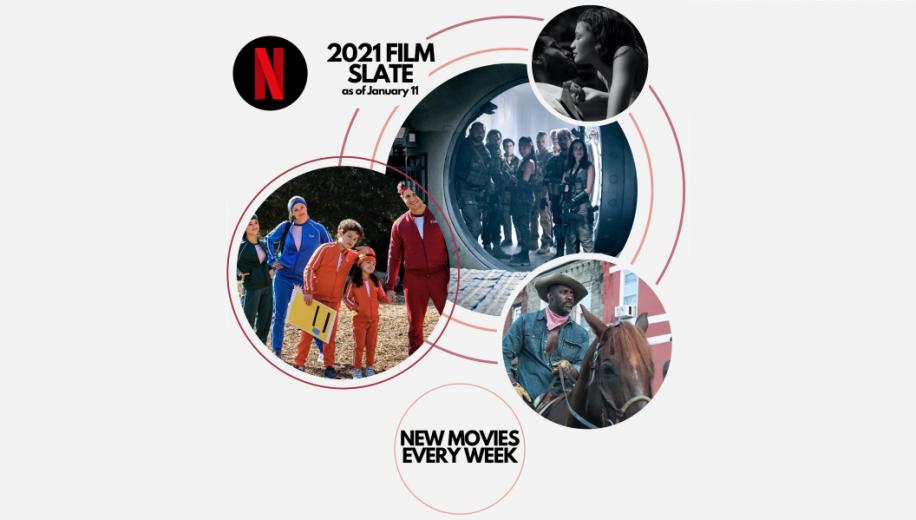 Netflix is kicking off 2021 with a 70 movie slate and the promise of a new movie every week for subscribers throughout the year.

It’s always been fun to bash Netflix for the company’s ‘peaks and troughs’ approach to the quality of its original output. For every Extraction there’s a The Last Days of American Crime!

However, what’s not so easy to have a crack at is the streaming giant’s commitment to ensuring that there’s always something new to watch if the latest content isn’t quite doing it for you.

Now, Netflix has unveiled a shiny new preview trailer showcasing the quantity and variety of its upcoming movie schedule. While quality cannot always be guaranteed (but then that’s true of any studio’s output) the involvement of so many Hollywood A listers will get viewers’ interest up.

The video is a sizzle reel of a number of the upcoming projects and among them are some high profile movies covering genres from Westerns to musicals and from animations to action. Among those showcased are Zack Snyder’s heist-in-a-zombie-apocalypse actioner Army of the Dead, the Chris Hemsworth starring Escape From Spiderhead, Thunder Force which features Octavia Spencer and Melissa Mcarthy as atypical superheroes, comedy YES DAY and a couple of Christmas movies for the end of the year to boot.

There’s also Idris Elba in The Harder They Fall plus Red Notice with its stellar cast including Ryan Reynolds, Gal Gadot and Dwayne Johnson, as well as an unrecognisable Leonardo DiCaprio and Jennifer Lawrence turning up in Don’t Look Up.

The list of 70 movies (see below) includes a number of non English language films, which is something that Netflix has been very strong on as it opens up audiences to content they may not have previously considered. Coming in January alone is Double Dad, a comedy from Brazil, while The Last Mercenary and Blood Red Sky, among others, will all come on line going forward.

Of course, there’s likely to be further additions to the original film lineup as we haven’t even mentioned the highly anticipated contract killer action thriller The Gray Man starring Ryan Gosling and Chris Evans, though that’s not due until 2022.

Don’t forget, brand new Netflix original series, documentaries, comedy specials and reality shows will be added to the mix too - though presumably there’ll be an equal number binned too! So, with an anticipated $19 billion being spent on content by the company, there’s likely to be something most viewers will enjoy throughout 2021.

A current list of 2021 original movies has been supplied by Netflix and is presented below:

A Castle For Christmas
﻿Fuimos Canciones*
﻿Kissing Booth 3
﻿Love Hard
﻿The Last Letter from Your Lover
﻿The Princess Switch 3
﻿To All The Boys: Always and Forever
﻿Untitled Alicia Keys Rom-Com

The Harder They Fall

A Week Away
﻿tick, tick…BOOM