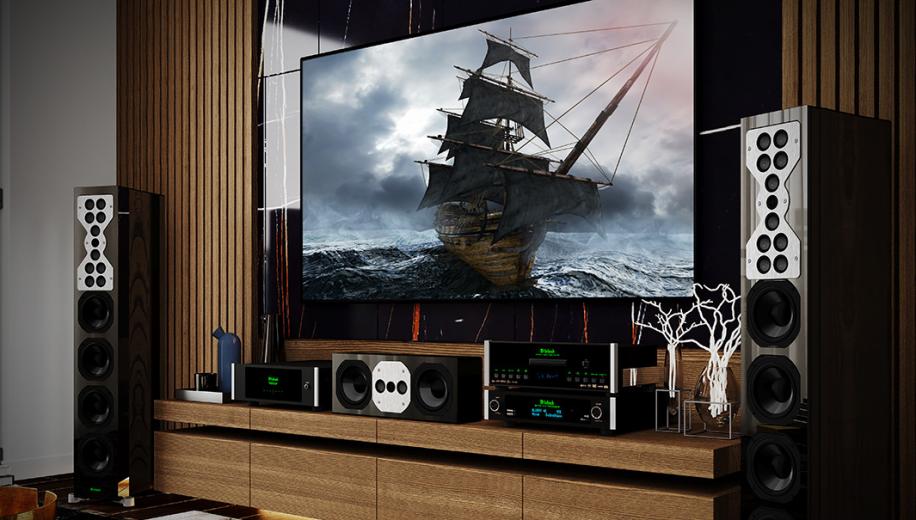 McIntosh’s busy release schedule for 2020 continues with something for home cinema enthusiasts as it unveils the all digital MX100 AV processor and MI347 7-channel power amplifier.

Designed to bring the distinctive look and performance of McIntosh’s renowned products to the world of home theatre, the MX100 AV processor and MI347amplifier offer the latest processing and decoding technologies in a streamlined package which can either be displayed or rack-mounted in a hidden installation, depending upon preference.

The all digital MX100 has 11.2 discrete audio channels, configurable as 7.2.4, via 13 balanced XLR connections and high-performance audio is promised from the seven premium grade 32 bit DACs on board.

The MX100 is compatible with surround sound and object-based 3D audio formats including Dolby Atmos and DTS:X and, as you’d expect at this level, room correction software is available in the form of built-in Audyssey MultEQ XT32 calibration software which provides more than 10,000 individual control points allowing a room’s finer details to be corrected.

HD and 4K video content is supported via four HDCP 2.2 compliant HDMI inputs and one output. Each HDMI port can handle 18 Gbps of bandwidth enabling Dolby Vision, HDR10 and HLG High Dynamic Range formats to be supported along with 4K Ultra HD at 50/60Hz with 4:4:4 colour spacing, Rec.2020 and 3D video pass-through.

Convenient operation is via remote control or a home automation system using RS232.

Obviously, McIntosh want you to pair the MI347 with its latest MX100 AV processor but it will work equally well with the company’s other processors too including the MX123 and MX170 or indeed most non McIntosh branded AV processors beyond that. If the processing exceeds seven channels then additional amplifiers such as McIntosh's MI254 4-Channel Digital Amplifier or MI128 8-Channel Digital Amplifier (both rack-mountable) can be used in concert with the MI347.

Bringing over technologies from the company’s wider range of power amplifiers adds features like Power Guard and Sentry Monitor which offer protection against speaker damaging signal overloads and short circuits respectively. Power Control automatically turns other connected McIntosh components on and off and can also initiate an eco-friendly shut down when detecting the timed absence of an input signal. It can also automatically turn the MI347 on when it senses a signal from the processor.

Both the MX100 and the MI347 include many typical McIntosh design cues including a black glass front panel, an illuminated McIntosh logo, rotary control knobs (MX100) and the familiar form factor highlighted by silver trim.

The MX100 AV processor and MI347 7-channel amplifier will be priced at £6,495 each and can be ordered now from Authorised McIntosh dealers.

UK shipping is expected to begin in December 2020/Jan 2021. US and Canadian orders will ship a little earlier in November.