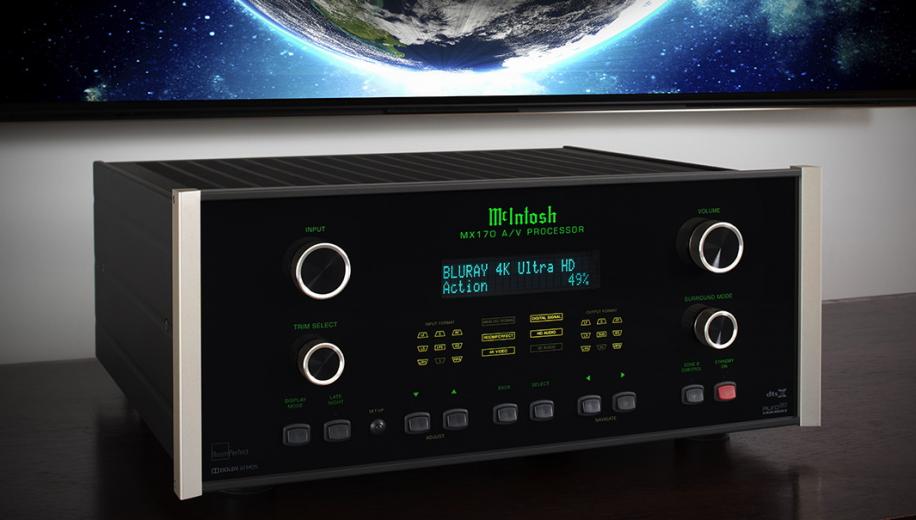 On something of a release roll after their MC257 amplifier announcement last month, US audio specialists McIntosh have now fired off a volley of upcoming releases featuring two AV processors, the MX170 and MX123, and a 5-channel amplifier, the MC255.

Delivering what McIntosh calls ‘the next generation of blockbuster-performance home cinema devices', the three new products breakdown like this.

McIntosh MX170 A/V Processor
At the top end of the scale and with a £20K price tag to go with it, the MX170 AV processor features 12 HMDI ports which all support 18Gbps bandwidth for full 4K Ultra HD and 4:4:4 colour plus HDR compatibility with HDR10, HLG and Dolby Vision formats, along with Dolby Atmos, DTS:X and Auro-3D object based audio support.

As well as being compatible with the latest 3D surround sound formats that add height to the soundfield, the MX170 uses room-correction technology called RoomPerfect to measure audio signals and adjust its output to speakers to compensate for the audio characteristics of the room. In this way, a home cinema setup can benefit from optimised frequency response, calibrated speaker volumes and integration of the subwoofer and speakers. There’s added flexibility in speaker selection and placement too.

To ensure an optimum video signal over long distances between the MX170 and the screen, there is a special HDBaseT output that helps prevent signal degradation and the processor also features 3D video pass-through so viewers can still get enjoyment from their 3D movie libraries.

The MX170 features balanced outputs for a 15.1 surround sound speaker configuration but if fewer speakers are available, four of the outputs can be used to bi-amp selected speakers or to drive additional subwoofers.

A whole host of digital inputs is available, including four optical, three coaxial and 1 USB (that each accepts up to 24-bit/192kHz signals), plus one digital balanced input. On the analogue input side, the MX170 features two balanced and four unbalanced inputs, a phono input, plus a 7.1 multichannel unbalanced input.

All the analogue and digital sources can be custom named to help manage the system and their volume levels matched to prevent sudden leaps or drops in volume levels when switching sources. Analogue inputs are treated to the latest analogue-to-digital converter technology to maximise the audio quality.

McIntosh MX123 A/V Processor
The new MX123 comes in at £9,995 and loses a few HDMI inputs and audio channels compared to its more expensive MX170 sibling but gains other features such as AirPlay 2 and Bluetooth support plus IMAX Enhanced certification to make up for it.

There are a total of ten HDMI ports, all of which are HDCP 2.3 compliant so they will be compatible with digital content protection specifications well into the future. They also feature 18Gbps bandwidth to enable support for 4K Ultra HD at 50/60Hz; 4:4:4 colour spacing; Dolby Vision, HDR10 and HLG High Dynamic Range (HDR) formats; plus Rec. 2020 compatibility and 3D video pass-through. One of the three HDMI outputs also supports Enhanced Audio Return Channel (eARC) functionality.

Hi-Res music files are supported and the MX123 can playback support DSD128 and ALAC 192kHz for better high-resolution audio performance.

The MX123 sports IMAX Enhanced certification means that the AV processor performs to a set of performance standards established by IMAX and DTS to create a consistent, higher standard for image and sound performance on premium devices. IMAX and DTS will also partner with award-winning Hollywood sound mixers to use a special variant of the DTS:X codec technology included in the MX123 to deliver an IMAX signature sound experience at home.

Using the included Apple AirPlay 2, the MX123 can receive content streamed from iPhones, iPads or Macbooks and also link with other AirPlay enabled devices to form a multi-room audio setup. Bluetooth and Spotify Connect are also present so non Apple mobile devices can stream to the MX123 too. To provide streaming performance and reliability, wireless connectivity has been improved to include 2.4/5GHs dual-band support.

The MX123 uses the Audyssey MultEQ XT32 room correction software rather than the MX170’s RoomPerfect system but the results are similar in dealing with the environment’s audio characteristics.

Each discrete audio channel has its own 32-bit premium digital-to-analogue converter (DAC) and the MX123 also has the flexibility to create two additional zones and send select audio and/or video to each zone.

Taking other technology cues from its seven channel sibling, the MC255 has a power output boost of 25 percent from 200 watts per channel (WPC) to 250W when using just the front left, centre and right channels. Using all five channels gives 200WPC and McIntosh’s Dynamic Power Manager (DPM) technology delivers the full 200/250W regardless of whether 4- or 8-Ohm speakers are used.

There’s been a 50 percent increase in filter capacity too which has more than doubled dynamic headroom from 1.7dB to 3.6dB and that has improved the performance of low frequencies, whereas the MC257 only benefited from a 20 percent boost to the filter.

The speaker binding post terminals are gold plated to reduce corrosion and preserve signal integrity to the speakers and McIntosh’s eco friendly power management will turn the amplifier off after a set amount of time if no input signal has been received.

Other, now standard, McIntosh technologies that ensure efficient operation include Power Guard which prevents potential speaker damage caused by clipping and over-driving of the amplifier, while Sentry Monitor protects against short-circuits by disengaging the output stage should the current ever exceed safe operating levels.

The MC255 features both balanced and unbalanced inputs and can to power a conventional five-channel home cinema. However, in concert with additional McIntosh digital amplifiers such as the MI128 or MI254, which add eight and four channels respectively, the MC255 can be used in home cinema setups that have additional speakers used in 3D object based Dolby Atmos or DTS:X surround sound setups.

It can also be set to two-zone operation so that the front three channels are used at 250W in one zone while the two surround channels are grouped to a second zone at 200W.

Orders can now be placed with authorised McIntosh dealers and shipping to the UK is expected to begin November 2019.