Power up the home cinema 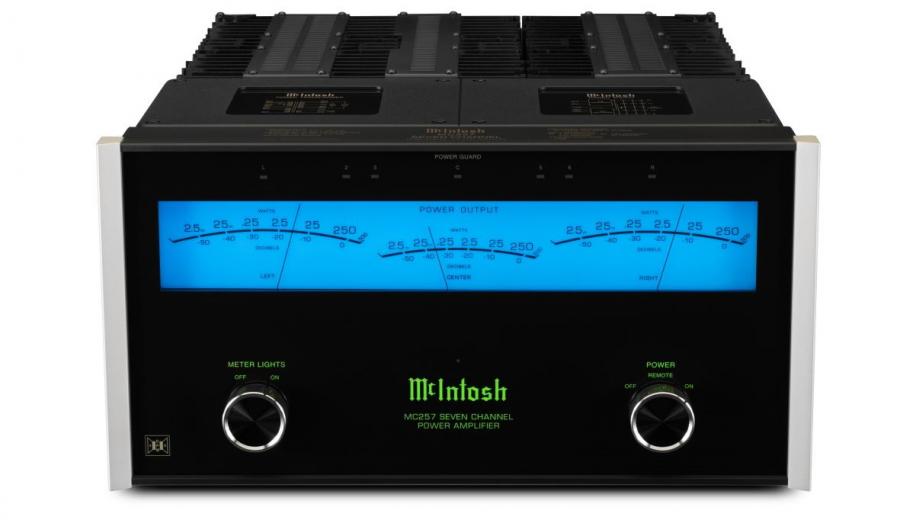 Home cinema setups could be about to benefit from McIntosh’s newly introduced MC257 7-Channel Home Theatre Power Amplifier, which aims to deliver the distinguished audio company’s distinctive sound and power.

That sound quality and power comes with a distinctive price tag too though, coming in at £12,995.

The MC257 is a direct replacement for the outgoing MC207 and is the first McIntosh amplifier to feature the company's new TripleView Power Output Meter which enables the real-time power reading from all three front channels to be monitored simultaneously. The TripleView meter design is an easy to read 38cm wide and is a streamlined version of the 3 individual meters found on the previous-generation model. The trademark blue light can be turned off to prevent distraction when viewing TV or projector screens.

Designed to be used in a variety of scenarios, the versatile MC257 can power a seven channel home theatre setup or be used in a five channel configuration with two channels available to power a second audio zone. Additionally, when paired with either McIntosh’s MI128 eight-channel or MI254 four-channel digital amplifiers it can be used to power home cinemas with more than seven channels, so there’s plenty of flexibility.

Other upgrades in the MC257 include a power output increase of 25 percent across the left, centre and right channels, boosting the previous 200 watts to 250 watts. This drops to 200W when all seven channels are driven and McIntosh’s Dynamic Power Manager (DPM) technology delivers the full 200/250 watts regardless of whether 4- or 8-ohm speakers are used.

Filter capacity has been increased by 20 per cent which results in a significant 94 per cent increase in dynamic headroom (from 1.7dB to 3.3dB) and an improvement in low-frequency performance.
Hard to miss are the five, McIntosh Monogrammed Heatsinks. These dispense with often noisy cooling fans that can interrupt a movie’s soundtrack and connect to advanced high-current output transistors to efficiently and silently cool the amplifier. A specially wound toroidal isolation power transformer also helps to keep noise to a minimum for those ‘pin drop’ moments during a film.

The improvements continue with speaker terminals that have been upgraded to McIntosh’s gold-plated binding posts and a front panel that exhibits improved colour accuracy and durability by using direct LED backlighting.
Sitting alongside the suite of new features are the usual array of tools that are used by McIntosh to keep their products working smoothly such as McIntosh’s power management system Power Guard, which prevents potential speaker damage caused by clipping and over-driving. There’s also Sentry Monitor technology, which protects against short circuits by disengaging the output stage should the current ever exceed safe operating levels.

Finally, both balanced and unbalanced inputs are included to connect the MC257 to a home cinema processor.

The MC257 sits on a polished stainless-steel chassis and is finished with the distinctive McIntosh design of a black glass front panel with the blue meters, illuminated logo, control knobs and aluminium end caps.

The MC257 Home Theatre Power Amplifier costs £12,995. Orders can be placed now and shipping will commence in October for UK orders and September for US orders.