Are you receiving me? 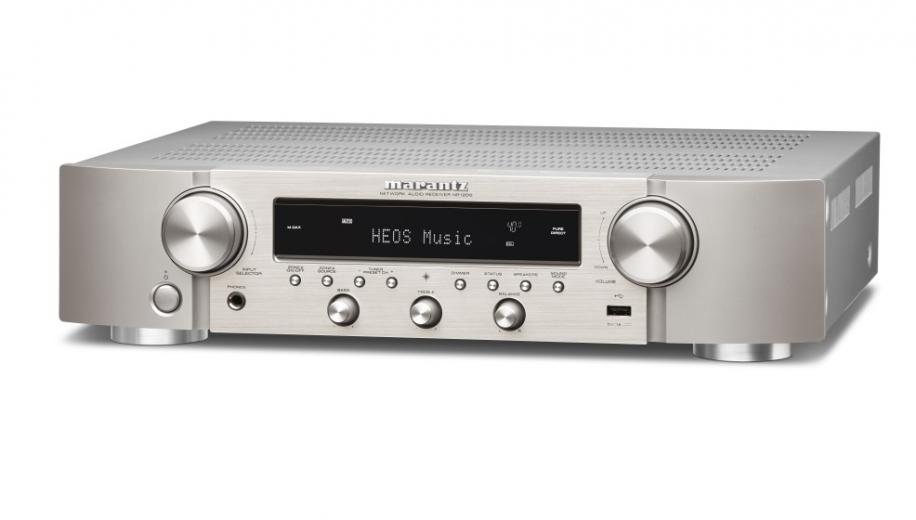 Marantz’s latest two channel receiver provides classic stereo amplification while embracing up to date convenience and access to networked content archives.
Featuring a living room-friendly, slimline design and capable of accessing content via Wi-Fi, Bluetooth and AirPlay 2, the NR1200 can form the centre of most AV systems by hooking into DAB radio and vinyl libraries while the HDMI ports can connect to Blu-ray players and games consoles. Support for a range of digital assistants allows the whole set up to be controlled via voice commands.

Designed as counter programming to soundbars, the NR1200 aims to provide an entertainment experience without recourse to the expense and technical intimidation of multichannel AVRs. Marantz’s engineers have gone out of their way to ensure that the slimline chassis does not compromise the amount of quality power the NR12000 is capable of delivering. To this end, they have designed a new high current, 75 watt per channel amplification section intended to drive any speaker with ease. The left and right power amplifiers share a power supply which features independent windings for critical functions. Thus, the power transformer is separated from other crucial circuits such as the preamplifier and wireless module thereby reducing crosstalk, improving channel separation and maintaining the musical soundstage and sonic clarity. And two DACs per channel enable improved dynamic range and signal to noise ratio.

Plugging content through this amplification is made easy by an advanced HDAM (High Definition Amplifier Module) phono stage which uses Marantz’s proprietary technology to create the widest bandwidth and lowest noise possible, thus vinyl lovers can experience their music with clarity and detail.

The HEOS wireless multi-room audio platform is built-in and enables content from a wide variety of streaming sources - including Spotify, Amazon Music, TIDAL, TuneIn Internet Radio and even locally stored music files - to be enjoyed in any room throughout the house on any HEOS compatible speaker or device. Content can be streamed separately to each speaker, or the same music can be played in every room - all controlled via the HEOS app. A built-in DAB+ tuner means digital radio can be enjoyed and streaming via Bluetooth and AirPlay 2 means content can be accessed from libraries on laptops and mobile devices of both the Android and Apple flavours. Additionally, an upcoming firmware update (due at the end of 2019) will implement a ‘Bluetooth Out’ feature which will enable listeners to connect their Bluetooth headphones to the NR1200. Owners can then listen to music throughout the house or at night without disturbing others and the option to control the volume of the headphones independently while others listen through the speakers is a useful feature for those with hearing impairments - useful for picking up dialogue during movie action scenes.

Indeed, for home cinema fans the NR1200 sports 5 HDMI inputs which all support the latest standards including HDCP 2.3, 4K Ultra HD 60Hz video, 4:4:4 Pure Colour sub-sampling, HLG , High Dynamic Range (HDR10), 21:9 video, 3D and BT.2020 pass-through. In addition, one input is ARC (Audio Return Channel) compatible enabling transmission of audio from the TV to the NR1200, which is able to downmix surround audio formats. Overall, configuration and set up is made easier since the HDMI inputs will automatically rename themselves depending upon the information provided by the source, be it a set top box, games consoles or Blu-ray player. Marantz has granted the NR1200 compatibility with the most popular digital voice assistants, so whether you favour Alexa, Siri or Google Assistant, you can verbally skip tracks, control the volume and change the input source. And should you fancy a change of digital helper or find that one suits your requirements better than the others, it’s possible to switch between them.

The Marantz NR1200 is available in September in black or silver-gold for £599.

Are any AVForums members looking for a flexible but simple to install stereo network receiver? Does this sound like it would fit the bill? See what others are thinking about the NR1200 in the discussion thread.