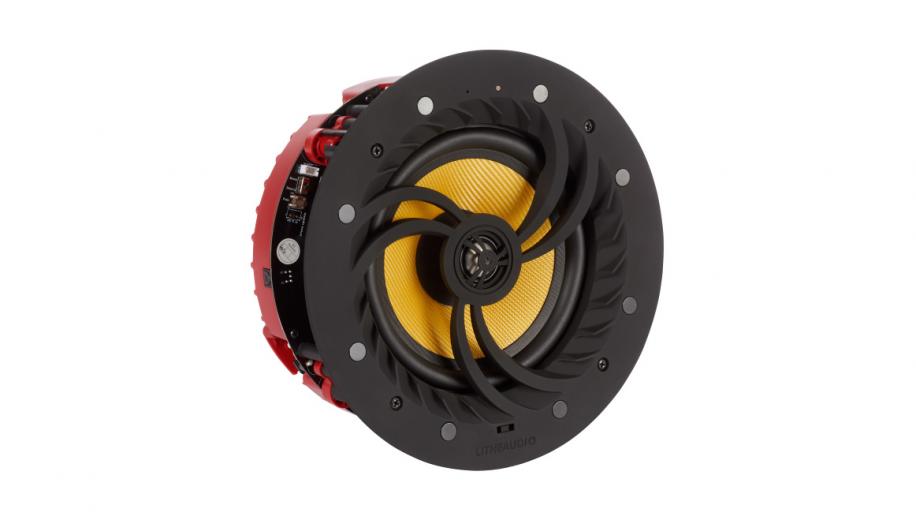 UK based AV brand Lithe Audio introduced its Wi-Fi ceiling speakers back in June 2018 before going on to release the world’s first AirPlay 2 compatible versions last year. Now it has moved another step forward with the Pro Series ceiling mounted speaker which is its first to feature WiSA integration for Dolby Atmos systems, while also offering PoE (Power over Ethernet) power delivery for convenience of installation and control, plus full wireless connectivity and voice control.

The speaker itself is quick and easy to install, so should suit DIY-savvy enthusiasts as well as custom installers, and includes Class D power at 60W RMS (2x30W), impedance of 8 Ohms, an additional passive speaker output, a 6.5-inch woven cone woofer, a 0.75-inch titanium cone tweeter, a frequency response of 55Hz - 20kHz, DC24V / 2.5A power supply and dimensions of 230 x 110mm (W x D).

WiSA (Wireless Speaker and Audio Association) is a consortium of leading brands and manufacturers which aims to ensure wireless interoperability between any member devices with easy set up plus robust, high definition, multi-channel, low latency audio. WiSA certification of the Lithe Audio Pro Series ceiling speakers means a full Dolby Atmos system can be achieved quickly and conveniently when combined with Dolby Atmos decoding transmitters, requiring no speaker cables, only the provision of power.

Tony Ostrom, President of WiSA, “We are thrilled about the launch of Lithe Audio’s Pro Series Wi-Fi ceiling speaker, as it ushers in a new standard of innovation for the custom install market given its integrated WiSA technology.'' Ostrom further added, “As the home entertainment centre becomes more advanced with each new product launch, we’re proud to stand behind Association members who prioritise quality and innovation.”

The WiSA platform transmits 24bits at up to 96kHz, twice the quality of a CD, offering near zero latency to reduce any potential lip-syncing issues. All the speakers in a WiSA system are certified to be synchronised within 1/1,000,000th of a second even when using all eight channels and the system also automatically recognises audio configurations from 2.0 to 7.1 and 5.1.2 for ease of set up.

The Pro Series can be powered directly from network cabling infrastructure via PoE++ (using the latest IEEE 802.3bt standard) though a separate PoE injector is required, as well as via an existing lighting circuit or conventional plug point. Wi-Fi connectivity operates over both 5GHz and 2.4GHz thereby increasing convenience, compatibility and reliability.

Other features include Ethernet in and out connections, an optical input as well as the ability to deliver audio in 24 bit/192kHz high resolution to match the increase in quality being rolled out over today’s streaming platforms.

This future proofing stretches to the speakers themselves which can be updated with firmware and software additions over the network via the Lithe Audio app.

As well as Voice control via Google and Amazon Alexa, the Pro Series also has drivers for compatibility with home automation platforms Control4, Fibaro and Loxone enabling the speakers to become part of a fully automated home system.

Amit Ravat, Co-Founder and Director of Lithe Audio explains, “We have been building this product for two-years basing our approach on what has been successful with our other speakers and listening hard to the wants and needs of the custom installation community, which included bringing the wireless operability of WiSA technology into the fold.