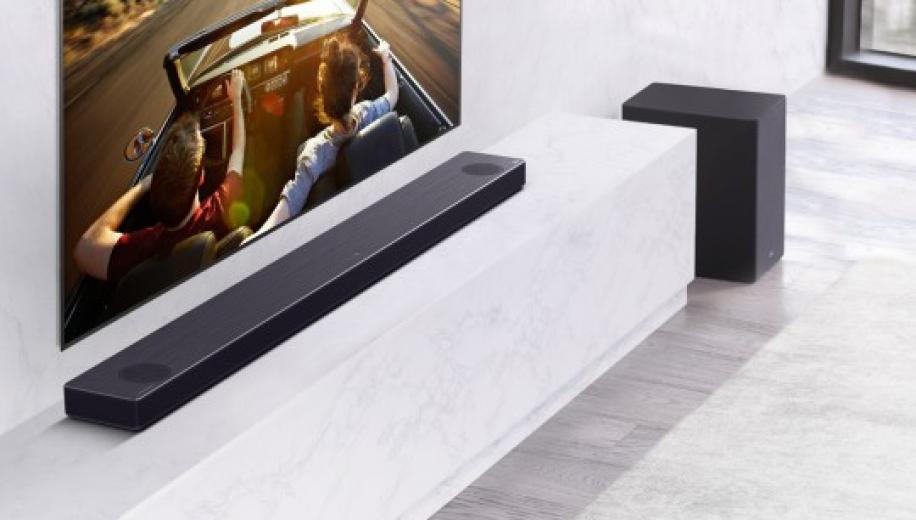 LG has once again used the lull between Christmas and New Year to start unveiling its lineup of new products due on show at CES which kicks off on 7th Jan. The company is starting with a new lineup of high end soundbars, once again tuned by Meridian audio for top performance and married to smart functionality and appealing design.

The majority of the newly announced soundbar lineup, which includes the SN11RG, SN10YG , SN9YG and SN8YG, feature support for Dolby Atmos and DTS:X object based surround audio formats. However, the headline feature being pushed by LG is AI Room Calibration which analyses the layout of the room and adjusts the soundbar’s output to suit the space’s characteristics. The soundbars are self-calibrating and able to perform this analysis automatically.

Once calibrated, content mastered in Dolby Atmos or DTS:X combines with Meridian’s bespoke audio functionality which boosts bass frequencies, as well as widens and elevates the perceived height of the soundstage. The overall effect is the perception of sound originating from multiple sources and directions.

Additionally, LG’S new soundbars also have an advanced algorithm that can take a conventional audio format and upscale it to what the company describes as near-studio quality.

For an even more realistic cinema experience, there’s an optional rear speaker addon kit, the SPK8 which is compatible with most of the new range of soundbars. There’s also 4K Pass Through functionality and the addition of enhanced audio return channel (eARC) allows owners to plug external devices directly into an eARC compatible TV to enjoy high resolution audio formats such as Dolby True HD and DTS Master Audio.
More of LG’s new soundbars for 2020 now come with Google Assistant built-in meaning listeners can control other compatible smart home devices via simple voice commands to their LG soundbar.

Two of these new models have already been recognized as CES Innovation Award winners. The flagship 7.1.4 SN11RG and SN9YG have been given the nod for their enhanced sound quality and usability. The SN11RG also comes complete with two rear surround speakers which deliver forward- and up-firing sound for 360 degree sound.

Park Hyung-woo, head of LG Home Entertainment Company’s audio and video business, said, “Our goal has always been to bring better sound to more people and by offering more great products that leverage our successful partnership with Meridian, our latest soundbars help achieve this.” He went on, “High-performance, convenient and very versatile, LG’s newest models will make the premium audio experience accessible to more customers worldwide.”

LG’s 2019 SL lineup of high end soundbars was already impressive and the new models now look to be adding a few of the features that were missing. Are these enough to make you consider an LG 2020 SN series soundbar? Let us know what you think in the discussion thread.