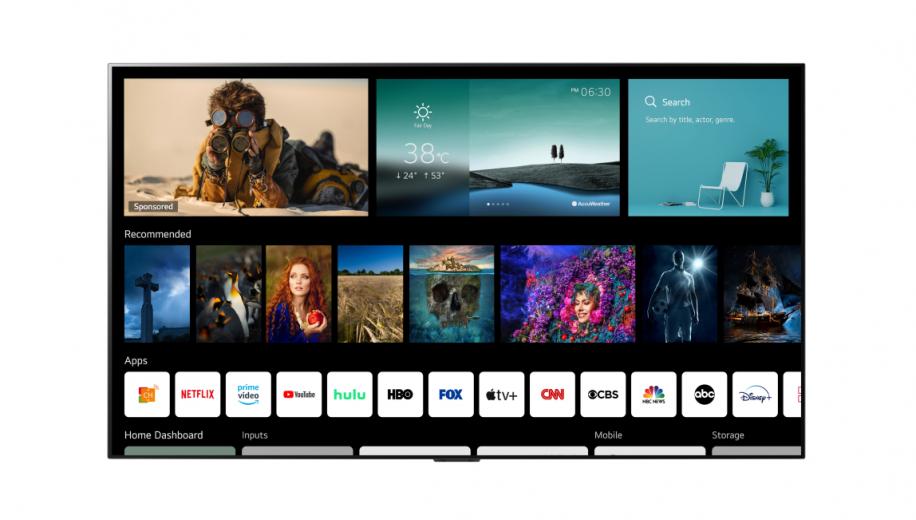 LG has announced that its latest webOS 6.0 smart TV OS will be introduced on the company's 2021 range of OLED, QNED Mini LED, NanoCell and UHD smart TVs

WebOS 6.0 will enhance usability with a new home screen and increase user convenience with support for new voice commands for both Google Assistant and Amazon Alexa. Plus, everybody’s favourite remote control handset, the Magic Remote has been upgraded.

For users familiar with WebOS, the first thing that will stand out is the newly designed home screen which has been updated to meet the needs of viewers’ changing content consumption habits. Thus, there’s faster access to the most regularly accessed apps, recommended content is presented full screen to easily see the related information and New Home acts as a central hub for settings and access to the greater webOS ecosystem.

The Magic Remote features a new premium design offering simpler controls for accessing LG ThinQ, Amazon Alexa or Google Voice Assistant plus there’s faster connections to the TV and other devices as well as hot keys for accessing popular content providers such as Netflix, Amazon Prime Video and Disney+.  In addition, the Magic Tap Near Field Communication (NFC) function enables transfer of content from compatible phones to a viewer’s TV simply by touching the phone and Magic Remote together.

The combination of AI technology, voice control and the new Magic Remote means Magic Explorer, an enhanced version of LG’s Magic Link, can deliver content-dependent information about actors, locations and other items of interest in the movies and shows that users are watching by simply speaking the request. There’s even the option to get information about, or shop for, products which appear across select broadcast channels and LG TV services including Live TV, Gallery, Settings and TV Guide, indicated by the cursor's changing colour whenever Magic Explorer has information to share.

Next Picks is a feature which suggests two live programs from broadcast or set-top box offerings as well as one VOD title or app by analysing viewing patterns and histories, thus saving time when it comes to choosing the next entertainment experience.

Park Hyoung-sei, president of LG Home Entertainment Company, explained, “The latest version of our user-friendly open TV platform webOS 6.0 represents the most significant update since we first introduced webOS in 2014.” He added, “With the new edition of webOS, LG is demonstrating its commitment of offering services, products and technologies that respond to the needs and wants of our valued customers.”

Even though it’s somewhat venerable,  LG’s webOS was the winner of AVForums’ Best Smart TV System in our 2020 Editor’s Choice Awards. We did note that it was ‘getting on a bit’ though, so LG must have been paying attention - well done!